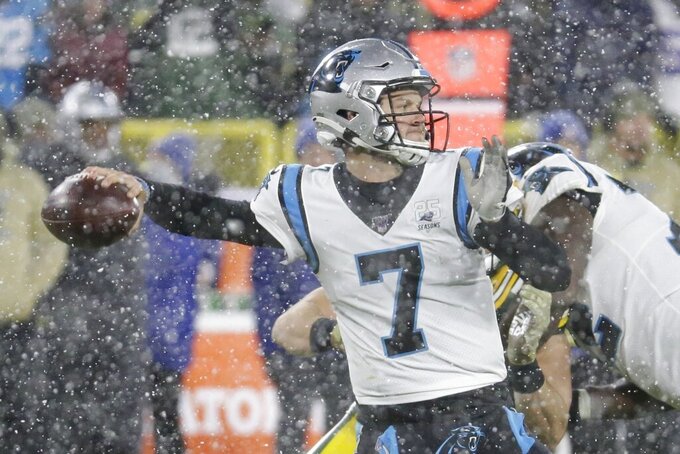 The Latest on Week 10 in the NFL (all times Eastern):

Minkah Fitzpatrick's takeaways are steering the Steelers in the right direction.

Fitzpatrick returned Jared Goff's fumble 43 yards for a touchdown in the first half, then sealed the victory by picking off LA's quarterback in the final minute, helping Pittsburgh stretch its winning streak to four games with a 17-12 victory over the visiting Rams.

The safety now has five picks in just seven games since Pittsburgh acquired him from the Miami Dolphins for a first-round draft pick.

Carolina's Christian McCaffrey was ruled just short of a snow-covered end zone on the game's final play and the Green Bay Packers held on to beat Panthers 24-16.

Aaron Rodgers and Co. improved to 8-2 with the home victory, helped by Aaron Jones' three TDs.

The Panthers dropped to 5-4.

They had a chance to force overtime, with Kyle Allen leading them down the field thanks to some of his career-high 307 yards passing.

But McCaffrey couldn't quite get the ball in for a score — according to both the original call on the field and a replay review.

Break up the Dolphins.

Miami won its second game in a row Sunday, edging the Indianapolis Colts 16-12 thanks to an 11-yard TD run by Ryan Fitzpatrick, three field goals and a late defensive stop.

The Dolphins improved to 2-7.

After getting off to an 0-7 start under rookie head coach Brian Flores, Miami beat the New York Jets 26-18 last week.

McVay allowed punter Johnny Hekker to throw a pass with the Rams facing fourth-and-1 at their 29 while trailing the Steelers by a touchdown in the third quarter. Hekker was hit as he threw and the ball fluttered into the hands of Pittsburgh's Trey Edmunds, a running back by trade, for an interception.

Pittsburgh took over at LA's 31 and failed to take advantage of the good field position. The Steelers were pushed back by a holding penalty and a sack by Rams linebacker Clay Matthews, keeping the score at 14-7.

— Will Graves reporting from Pittsburgh.

Vinatieri's second of the game against the Miami Dolphins on Sunday raised his career total to 709 tries, equaling Andersen.

Still, it has been a rough season for Vinatieri, who missed five field goals and six extra points. That includes a botched PAT on Sunday after the Colts took a 12-10 lead in the fourth quarter.

Aaron Donald's Pittsburgh homecoming is off to a quiet start.

The Los Angeles Rams star defensive tackle, who grew up in the city's eastern suburbs and played at the University of Pittsburgh, had just one tackle in the first half as the Rams found themselves trailing the Steelers 14-7.

Pittsburgh's shuffled offensive line kept Donald in check and the Steelers defense shut down the Los Angeles offense. The Rams managed just 132 yards in the opening half. Their only touchdown came on a 25-yard scoop and score by linebacker Dante Fowler on the game's second offensive snap.

Steelers safety Minkah Fitzpatrick scored for the second game in a row when he grabbed Jared Goff's fumble and raced 43 yards for a TD.

On a snowy day, Aaron Rodgers and the Green Bay Packers could have taken the points, kicked a gimme field goal with 2 seconds left in the first half, and gone to the locker room with a seven-point lead over the visiting Carolina Panthers.

Instead, as the flakes fell, coach Matt LaFleur sent Rodgers and the rest of the offense out to the field for first-and-goal at the 1 after a pass interference call in the end zone on the previous play.

Didn't work out for the Packers.

They tried to run the ball in, but Panthers defensive lineman Gerald McCoy broke through to wrap up Jamaal Williams for a loss.

For the first time all season, the Indianapolis Colts are scoreless at halftime.

Probably not a coincidence that they had Brian Hoyer at quarterback.

Hoyer threw two interceptions in the first half — one leading to a Miami field goal, the second leading to Ryan Fitzpatrick's 11-yard run for a TD — and the Dolphins lead the Colts 10-0.

With Jacoby Brissett, T.Y. Hilton and Devin Funchess all sidelined, Indy put up just 109 yards in the first half.

With Brian Hoyer making his first NFL start in more than two years, the Indianapolis Colts are the 16th club to have used multiple starting QBs this season.

Hoyer stepped in for Jacoby Brissett, out with an injured left knee.

Half of the league — 16 of its 32 teams — have used more than one guy behind center at the get-go of a game.

Hoyer opened Sunday's game against the Miami Dolphins and Ryan Fitzpatrick by going 5 of 10 for 86 yards and an interception.

Fitzpatrick, of course, is not the only quarterback to start for Miami this season; Josh Rosen has started for the Dolphins, too.

Earlier Sunday, the Bengals went with Ryan Finley in place of the benched Andy Dalton, while the Lions used Jeff Driskel instead of the injured Matthew Stafford. Both the Bengals and Lions lost.

So much for the New Orleans Saints' six-game winning streak.

And so much for the Atlanta Falcons' six-game losing streak.

In a stunner Sunday, Grady Jarrett delivered 2½ of Atlanta's six sacks of Drew Brees — one fewer than the Falcons' defense had managed all season coming in — and Matt Ryan threw for a pair of TDs in a 26-9 win at New Orleans.

New Orleans dropped to 7-2, while Atlanta improved to 2-7.

Here are the other results in Sunday's early games:

Patrick Mahomes not only is back for the Chiefs, he's making sure everyone sees just how healthy the NFL's reigning MVP is.

Early in the fourth quarter at Tennessee, he found himself with the pocket collapsing. Mahomes jumped up and threw to Mecole Hardman, who ran with the pass for a 63-yard touchdown and a 29-20 lead for the Chiefs.

Mahomes has 379 yards passing and three touchdowns so far in his return after missing two games with a kneecap injury.

The Baltimore Ravens quarterback took off on a videogame-worthy run, replete with a spin move, for a 47-yard TD in the second half against the Bengals.

Defender after defender was left grasping at air as the 2016 Heisman Trophy winner made his way down the field.

Jackson's touchdown increased Baltimore's lead to 35-10 in the road game.

New Orleans receiver Tre'Quan Smith is still in the game for the Saints — somehow.

Smith held onto the ball for a 13-yard gain despite being hit hard enough by Damontae Kazee that his helmet popped off.

It was Smith's first catch since Week 2. He missed five of the previous six games with an ankle injury

The most surprising halftime score from the early games? Without a doubt, it's the New Orleans Saints' 13-6 deficit at home against the Atlanta Falcons.

The Saints were winners of six straight and entered 7-1, while the Falcons came into the day on a six-game losing streak and a 1-7 record.

Falcons tight end Austin Hooper has the lone touchdown so far on an 8-yard pass from Matt Ryan. It was Hooper's sixth TD catch this season.

The other scores around the league after two quarters:

The Tennessee Titans are tied with the Kansas City Chiefs and Patrick Mahomes 13-13 at halftime thanks to a big defensive touchdown by Rashaan Evans.

The Chiefs led 10-7 and were driving when rookie linebacker David Long hit Damien Williams for a 3-yard loss and knocked the ball loose.

Titans linebacker Evans, the No. 22 pick overall out of Alabama in 2018, picked up the ball, juked out Mahomes — who went down to the turf — and ran 53 yards for the score.

Chiefs right tackle Mitchell Schwartz went down with 2:46 left in the first half, snapping a streak of 7,894 consecutive snaps played that had been the NFL's longest active streak.

Giants left tackle Nate Solder has been ruled out of their game against the Jets with a concussion, leaving the team without the two tackles who had started every game this season.

Right tackle Mike Remmers was ruled out before the game with a back problem.

Trevathan ran off the field with his arm dangling by his side after he got hurt while trying to sack Jeff Driskel in the first quarter.

The 29-year-old Trevathan began the day with a team-high 67 tackles. The Bears say his return is questionable.

Patrick Mahomes was almost picked off on his first throw back with the Kansas City Chiefs. Instead, he picked up right where he left off.

Mahomes got lucky on his first play against Tennessee after missing two games with a knee injury, nearly throwing an interception.

Mahomes then drove the Chiefs 69 yards over 11 plays, capping the series with a shovel pass to Travis Kelce for a 3-yard touchdown and a 7-0 lead over the Titans.

Kareem Hunt has his first NFL touch in nearly a year following an eight-game suspension.

The troubled Browns running back returned for his first action since Nov. 19 last season, when he was with the Kansas City Chiefs.

The Browns signed the Cleveland native in February.

He was banned for eight games by the league for two physical off-field altercations, including one when he shoved and kicked a woman.

On Cleveland's first possession against Buffalo on Sunday, Hunt caught a short pass from Baker Mayfield for a 7-yard gain.

The 24-year-old Hunt led the league in rushing for Kansas City in 2017.

Patrick Mahomes will start for the Kansas City Chiefs at the Tennessee Titans, just over two weeks after the reigning NFL MVP dislocated his kneecap.

There initially was concern that the quarterback could be sidelined for months.

But it turned out there was no structural damage to the knee, and Mahomes never missed a practice.

He missed two games, with Matt Moore starting in his place.

Lions quarterback Matthew Stafford has been ruled out for Detroit's game at Chicago because of hip and back issues, stopping his streak of 136 consecutive starts.

The 31-year-old Stafford had been listed as questionable. It's the first time he has missed a regular-season game since the 2010 season.

Jeff Driskel is stepping in for Stafford. Driskel is making his sixth career start.

Stafford is working on another terrific year for Detroit, throwing for 2,499 yards and 19 touchdowns in the first half of the season.

The Bears had been a 2½-point favorite over the Lions, but Chicago was favored by 6½ points Sunday morning after the Stafford news broke.