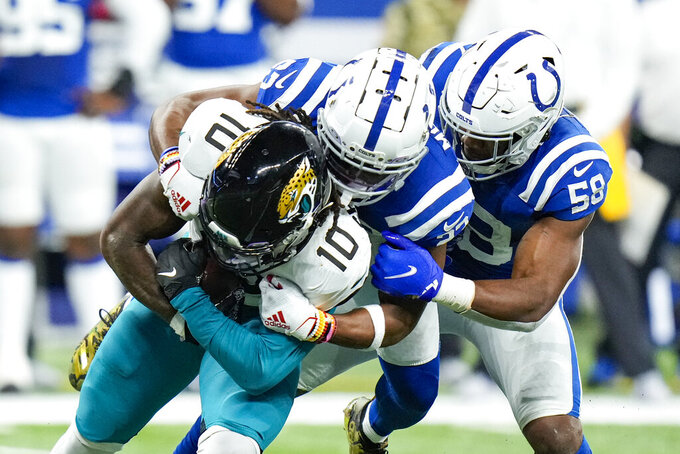 INDIANAPOLIS (AP) — Trevor Lawrence finally got a chance to play for the win.

Trailing 23-17 with 2:17 left on Sunday against the Indianapolis Colts, the rookie jogged onto the field, confident he could lead the Jaguars to the winning score and end nearly two years of road futility.

“This is a team that, that’s what they do is take the ball away,” Lawrence said. “We talked about it this week and that was a point of emphasis. As I was going down, someone came from the back side and punched it out. I just have to take care of it. I didn’t think the ball was super loose, but that’s on me.”

For Lawrence and the offense, it wasn't an easy one to accept.

After showing promise with two wins over the last three games, Lawrence and the Jags struggled mightily against an improving Indy defense. Lawrence went 3 of 14 passing while converting just one of eight third-down chances in the first half.

And while the top overall pick in April's draft quickly accepted responsibility, teammates knew there was plenty of blame to share.

“It sounds like we’re talking and it’s all Trevor’s fault and it’s not anywhere close to that,” tight end Dan Arnold said. “I think everybody played bad. There were dropped balls everywhere and penalties everywhere. I think it’s one of those things that as an offense, we have to put it on our shoulders and say, ‘Hey, we have to get better and we will.’”

Lawrence spent much of the game trying to evade defenders and overcome long-yardage situations.

A slow start by the defense and special teams only complicated matters.

When E.J. Speed returned a blocked punt for a touchdown, the Colts led 10-0 midway through the first quarter.

“Bubba (Ventrone) had a feeling we were going to block a punt this week,” Indy coach Frank Reich said, referring to his special teams coordinator. “We’ve been doing some serious punt block drills in middle of the season and he said ‘Someone’s going to get it.’ Bubba was really confident we were going to get a block this week.”

Defensively, there were other problems.

Jonathan Taylor piled up 93 of his 116 yards in the first quarter against a defense that allowed 100 yards rushing to only two of first eight opponents. Taylor's 4-yard scoring run put Jacksonville in a 17-0 hole that it never quite got out of.

While the defense only gave up two more field goals over the final three quarters and Lawrence got the Jags within 20-17 on a 2-point conversion pass to Arnold early in the fourth quarter, the Colts made sure Lawrence didn't take advantage of his final chance.

“This one stung (for Trevor), I could tell,” coach Urban Meyer said. “This one hurt him. A lot of guys were stung in there because we felt like we could go down and win the game, on the road and against a good team.”