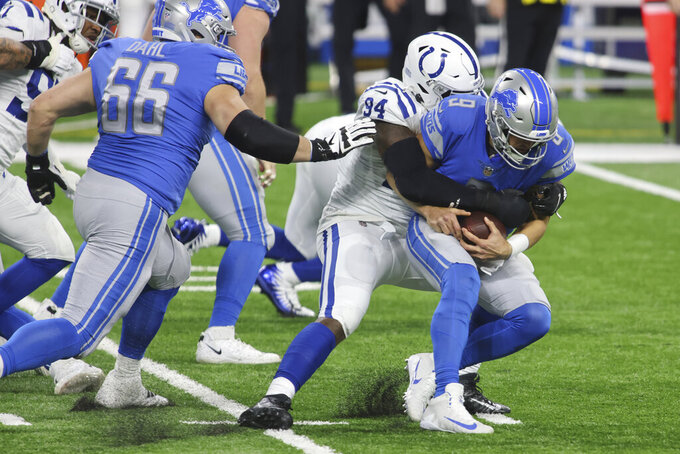 INDIANAPOLIS (AP) — Pro Bowl linebacker Darius Leonard just wanted to get back on the field.

The Indianapolis Colts needed his presence — and his energy.

With their emotional leader returning from a groin injury Sunday, the Colts defense rebounded from two slow starts by dominating the first half and then making two game-changing plays in the second half.

“You've got to have plays like that to be a good defense," Leonard said after the 41-21 victory at Detroit. “You look at the defenses that play in Super Bowls and they have 40-plus takeaways. That's what we've got to do, that's something we take pride in. I told the guys last night, ‘Who’s going to be the first one to have a takeaway? I’ll give you the T-shirt right now.'"

Leonard might not have taken the prized trophy home Sunday night.

What he did do, though, was play up to his nickname, “The Maniac.” He led the Colts (5-2) with nine tackles, consistently created havoc for the Lions offense and turned the game with a strip-sack of Matthew Stafford with the Lions at least in field-goal range.

Jordan Wilkins converted the turnover into a 2-yard touchdown run and a 2-point conversion on the ensuing possession to make it a 28-14 game. Kenny Moore II picked off Stafford on the next Lions' play, returning it 29 yards for the score and a 35-14 lead.

In seven games this season, the Colts defense has accounted directly for 25 points with three touchdowns and two safeties. No wonder quarterback Philip Rivers is savoring the contributions the Leonard-led defense have made.

“Our defense has, what, 11 interceptions I think now, a handful of them have been (returned) for touchdowns," Rivers said.

“Darius comes up with a huge strip fumble on the sack. So if we can continue to protect the football like we did today, get two turnovers, one we scored — we’re going to have an opportunity to be in the game each and every week."

That component could be critical moving forward.

Indy's defense faces its biggest yet when reigning MVP Lamar Jackson and the Baltimore Ravens (5-2) visit Lucas Oil Stadium next weekend. That's followed by a Thursday night trip to Tennessee and consecutive home games against Green Bay and the Titans.

And the Colts expect Leonard to do everything he can to keep the Colts in the playoff mix.

“Certainly Darius is the leader of that defense in many respects, first and foremost with his playmaking ability," coach Frank Reich said. “Love it when he’s out there and the plays that he makes and the energy that he brings. He definitely gets us going on defense.”

Run defense. The Colts allowed 5 yards rushing in the first half and 29 total on 13 carries. But Sunday's minuscule average of 2.2 yards per carry doesn't tell the whole story. Adrian Peterson had five carries for 7 yards while D'Andre Swift had six carries for 1 yard.

Special teams. Yes, punter Rigoberto Sanchez has had a terrific season and rookie kicker Rodrigo Blankenship is ranked among the league's leaders in scoring. But on a day where just about everything else went right, Sanchez's blocked punt led to Detroit's first touchdown and Blankenship missed two extra points.

Nyheim Hines. The flashy running back scored two spectacular touchdowns, including a career-long reception of 29 yards. He finished with three catches for 54 yards. But what will be best remembered about this game are his celebrations roundoffs into twists. He even stuck the landing on the first.

Jonathan Taylor. Indy's starting running back never quite got cranking in the Motor City. He had 11 carries for 22 yards and two catches for 9 yards. Reich said he got a preliminary report that Taylor may have hurt his ankle Sunday but provided no additional details.

Receivers T.Y. Hilton (groin) and Ashton Dulin (knee) did not return after getting hurt in Detroit. Reich said Monday both will be monitored throughout the week, but would not rule anyone out. Starting cornerback Rock Ya-Sin entered the concussion protocol in the fourth quarter when a teammate inadvertently hit him in the head but has already been cleared to play.

A year ago, the Colts were sitting in the same spot — 5-2 with a chance to make the playoffs. Then they lost seven of their last nine and missed the postseason for the fourth time in five years. Indy looks much more prepared to handle the second half this season and the next four weeks will play a key role in dictating where the Colts fit into the AFC pecking order.