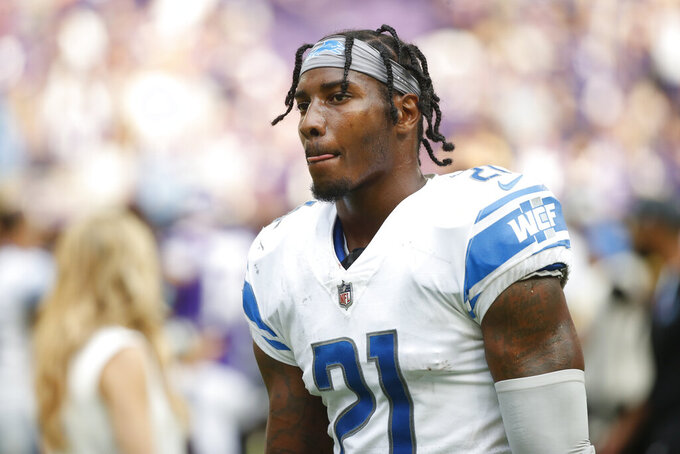 MINNEAPOLIS (AP) — Dan Campbell has tried to soak the Detroit Lions in his signature blend of confidence and enthusiasm, a 6-foot-5 energy drink of a head coach who is determined to hoist one of the NFL's most historically unsuccessful franchises onto his broad shoulders.

For all the tough talk, like his introductory promise the Lions would “bite a kneecap off” while figuratively climbing to their feet after being knocked down, there's no doubt Campbell deeply cares about his new team.

After a second crushing defeat for the Lions in a span of three weeks, the emotion came spilling out as Campbell conducted his postgame news conference following the 19-17 loss at Minnesota.

Greg Joseph kicked a 54-yard field goal as time expired to give the Vikings the victory and keep the Lions winless, despite a brazen call by Campbell for a 2-point conversion with 37 seconds left that delivered a short-lived, one-point lead.

“When you see your players give all that they have and you lose that way, it's tough. You don't want that for them, but we'll be better for it," Campbell said with red, wet eyes and a faltering voice as he tried to hold back more tears. “Ultimately, we didn't do enough to win, but I was proud of them, and I loved the fight they had in them, and I loved the grit.”

The Lions (0-5) trailed for nearly two-thirds of the game and were down 16-9 with no timeouts, when the Vikings handed the ball off to Alexander Mattison on third-and-7 from their 21 right after the 2-minute warning. As he chugged his legs for extra yardage, Mattison had the ball ripped away from him by Jalen Reeves-Maybin. Three plays later, D'Andre Swift had Detroit in the end zone to trigger the 2-point try that Campbell had decided on ahead of time.

“I wanted to finish it off. I felt the best way to win that game was to go for the 2-point and be done with it,” Campbell said. “I trusted our guys.”

The Lions lost to Baltimore by an identical score, when the Ravens scrambled into position for an NFL-record 66-yard field goal by Justin Tucker on the final play. In that game, the Lions let Lamar Jackson complete a 36-yard pass on fourth-and-19 in the closing seconds. There was a missed delay-of-game penalty before the winning kick that likely would have pushed Tucker out of range.

This time, the Vikings took over with 33 seconds and two timeouts left from their own 18. Kirk Cousins completed three passes, two to Adam Thielen for a total of 40 yards, and pulled out the victory on Joseph's fourth field goal of the game.

“We haven’t quite got over the hump, but I do think, in the long run, this is going to pay dividends for us,” Campbell said. "As ugly as it is right now and hard to swallow, I do think we’re building something special here that’s going to serve us well in the long term.”

The Lions have lost nine straight games, including the last four contests of last season. Campbell was hired to replace Matt Patricia, the eighth head coach in Detroit since Wayne Fontes, who was the last to win a playoff game, in 1991.

Having led the league in fourth-down attempts through the first four games, and now going for the high-risk, high-reward 2-point try, Campbell has not held back in trying to give the Lions a dose of good vibes in the early stage of this rebuilding project.

“It hurts pretty bad. Understand, coach was a player at one point, so that passion is still there,” linebacker Trey Flowers said. “He puts a lot into it, just like everybody in this locker room. Put a lot into it and come up short, he's going to be emotional.”