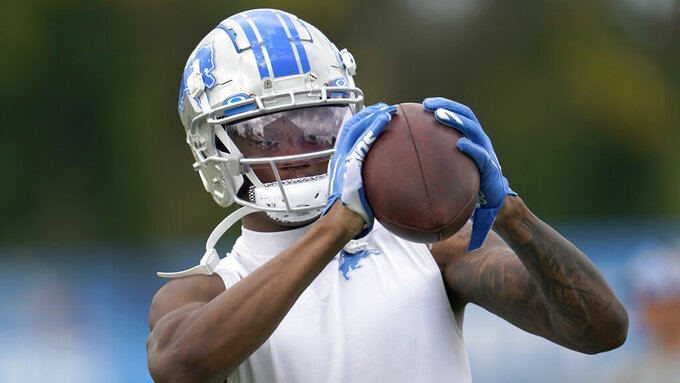 DETROIT (AP) — The Detroit Lions held training camp at Ford Field on Saturday, hoping it is a step toward gaining home-field advantage this season.

Last year, the Lions went 3-13-1 and had the lowest home attendance numbers of any team in the NFL. In the past four years, they’ve won a total of nine home games.

The Lions usually hold camp in Allen Park but instead held their annual scrimmage at Ford Field, where 18,000 fans packed into their stadium, the most at the event since 2015.

“This is unbelievable,” coach Dan Campbell said to the crowd before practice. “I can’t believe you guys.”

The optimism doesn’t come out of nowhere. After starting last season 0-10-1, the Lions finished by winning three of their final six games, including three consecutive wins at home.

“The last three home games we had, there was a good vibe,” Campbell said. “We could feel it as players and coaches. I would say they’ve picked up right where they left off, you know? That isn’t easy to do. Sitting there at the end of the year, we got no wins, then we get a win, you get two. Listen, that’s a credit to our fans. They got hope.”

Detroit spent the offseason trying to build off that finish, especially on the offensive side of the ball. The Lions drafted Alabama wideout Jameson Williams with the 12th overall pick and signed former Pro Bowl receiver DJ Chark in free agency.

While Williams remains sidelined with a torn ACL suffered in the College Football Playoff, Chark showcased his talents to the Ford Field crowd on Saturday. During the scrimmage, Chark caught four passes for 76 yards and two touchdowns, including a 33-yard score that ended practice.

“I really have big expectations for this team, definitely for this offense,” Chark said after practice. “And I want to do my best to live up to those.”

Since making the Pro Bowl in 2019, Chark has struggled to stay healthy. He missed three games for the Jacksonville Jaguars the following season, and a broken ankle caused him to miss the final game 13 games in 2021. Saturday marked his first time competing on a pro football field since that injury.

“It felt great,” Chark said. “This is my first time really being in here. Just looking around, getting the atmosphere, the fans are excited. I’m excited. It’s my first time being back on a game field since Sept. 30 or something like that, so I’m just taking it all in and enjoying it.”

Despite the optimism, Campbell knows those feelings won’t last long if the team doesn’t deliver. The Lions haven’t made the playoffs since 2016 and haven’t won a playoff game since 1992. Campbell regularly gets recognized in the Detroit area in his second year leading the Lions, but he knows the tone of those encounters will change if his team doesn't start winning.

“It’s a lot better when you’re winning,” Campbell said. “When you’re losing, it’s, ‘Hey Coach, take this.’ We’re in a good place right now. We just got to get a little bit better. That’s what we got to do.”

NOTES: CB Jeff Okudah did not participate in Saturday’s scrimmage, marking the second straight practice he has missed. … Second-round pick DE Josh Paschal remains sidelined after undergoing sports hernia surgery in the spring, but Campbell said Paschal is ahead of schedule in his recovery. … S C.J. Moore was removed from the non-football injury list on Friday.