Lions, Packers attempt to bounce back after losing openers 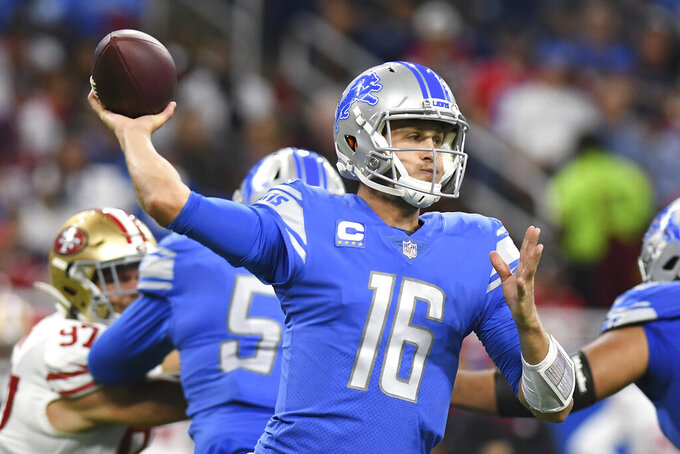 OPENING LINE: Packers by 11 1/2, according to FanDuel SportsBook

TURNOVER DIFFERENTIAL: Lions: plus-1. Packers: minus-3.

LIONS PLAYER TO WATCH: Amani Oruwariye becomes the team’s top CB now that a ruptured Achilles tendon has knocked Jeff Okudah out for the rest of the season. Detroit drafted the former Penn State standout with a fifth-round pick in 2019 and he started 15 games last season.

PACKERS PLAYER TO WATCH: QB Aaron Rodgers is the reigning MVP, but is coming off a miserable performance in which he went 15 of 28 for 133 yards with two interceptions and no touchdown passes.

KEY MATCHUP: Packers WR Davante Adams vs. Lions secondary. Adams had a franchise-record 115 catches for 1,374 yards last year and also had 18 touchdown catches to match Sterling Sharpe’s team record. The Saints limited him to five receptions for 56 yards. Adams will be facing a Detroit secondary that’s not at full strength without Okudah. The Lions starting cornerbacks will likely be Oruwariye and Ifeatu Melifonwu, a rookie third-round pick from Syracuse.

KEY INJURIES: Along with Okudah’s injury, the Lions have WR Tyrell Williams in concussion protocol. Lions OT Taylor Decker is out with a finger injury that will cause him to miss at least Detroit’s first three games. … Packers OLB Za’Darius Smith won't play Monday night due to a back issue. Packers coach Matt LaFleur said Friday that Smith is going on injured reserve, which will keep him out for at least three games. Packers TE Josiah Deguara and OG Lucas Patrick are in concussion protocol. Packers S Darnell Savage left the Saints game with a shoulder injury. Packers All-Pro OT David Bakhtiari is on the physically unable to perform list and will miss at least Green Bay’s first six games as he recovers from a torn anterior cruciate ligament.

STATS AND STUFF: The Lions erased most of a 28-point deficit before falling 41-33 to the 49ers in their season opener. … Green Bay’s 38-3 loss to the Saints ended the Packers’ string of six straight season-opening victories. … Former Packers RB Jamaal Williams and RB D’Andre Swift combined for 93 yards rushing on 20 carries and each caught eight passes in the Lions’ loss to the 49ers. ... Lions TE T.J. Hockenson had a career-high eight catches for 97 yards and scored for the third straight season-opening game. ... Lions LT Penei Sewell, the No. 7 pick overall, made a late switch from RT because of Decker’s injury. Sewell fared well against 49ers DE Nick Bosa. ... Lions DB Will Harris had a career-high seven tackles against San Francisco. … The Packers have won their past eight home openers, the longest such streak in team history. … Rodgers has 51,378 career yards passing and could overtake John Elway for 10th on the NFL’s career list Monday night. Elway threw for 51,475 yards. … Packers K Mason Crosby has made 19 straight field-goal attempts, four off his own team record. Crosby made 23 straight field-goal attempts from 2010-11. … The Packers have never lost consecutive games within the same season under LaFleur, who is in his third year as Green Bay’s coach. … New Packers defensive coordinator Joe Barry held the same position with Detroit from 2007-08. … This is the second straight year the Packers have opened their home schedule against the Lions. … Both quarterbacks attended California, were first-round picks and helped their teams reach the Super Bowl in their third seasons. Green Bay drafted Rodgers No. 24 overall in 2005 and the Los Angeles Rams selected Jared Goff No. 1 overall in 2016. The Lions acquired Goff from the Rams in March.

FANTASY TIP: Packers RB Aaron Jones rushed for 168 yards, caught four passes for 68 yards and scored three touchdowns when the Lions visited Green Bay last year. He has averaged 5.4 yards per carry against the Lions in his career. After Green Bay failed to produce any kind of rushing attack in its opening game, look for Jones to have a big performance Monday as the Packers look to establish the run.