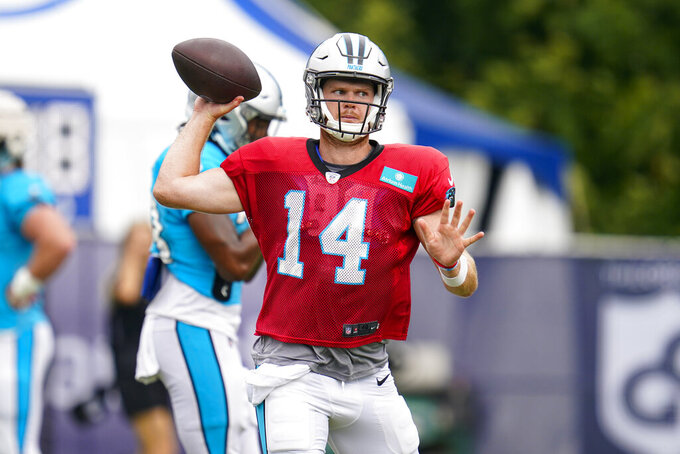 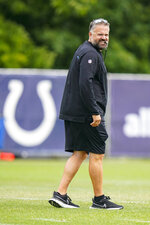 Sam Darnold faced the first real challenge with his new Carolina teammates, too.

And after finishing the first of two joint practices at the Colts training camp facility, it's clear everybody still has some finetuning to do before Friday's next workout and Sunday's preseason opener.

“They're an 11-5 team, they were a playoff team last year, so I guess that's one of the reasons we wanted to come here," Panthers coach Matt Rhule said. “We want to see how far away we are from them."

Rhule wasn't impressed with the Panthers' slow start but applauded the team's reaction by picking up the pace later and perhaps setting up a better workout Friday.

But this week will largely be graded on the quarterback play.

Both teams made big offseason moves to acquire what they hope will be foundational pieces.

Carolina obtained Darnold in a deal with the New York Jets, who swapped first-round picks with the Colts in 2018 to take the former Southern California star No. 3 overall. Darnold is trying to revive his career after going 13-25 with the Jets, and the long weekend in Indy started with mixed results.

While he scrambled to extend plays, he also missed receivers down the field, and the drops didn't help.

“There's also a lot of plays our tight ends left out there today, too, and you can't always tell it, but we're not probably where we're supposed to be, and when the play's not there, Sam's got to turn and throw the ball away," Rhule said. "All of us have got to be a little better in the passing game tomorrow."

Meanwhile, the Colts found themselves working in two youngsters.

Carson Wentz, the projected starter after a trade with Philadelphia, hasn't practiced in almost two weeks because of an injured left foot. Wentz was walking around on the field with a mask — and no protective gear around the surgically repaired foot.

Team owner Jim Irsay told reporters the Colts would be cautious with Wentz for the Sept. 12 season opener against Seattle.

If Wentz doesn't play against the Seahawks, Irsay believes the likely replacement may already be in camp.

The strong-armed Eason is in his second season out of Washington, but his rookie year was a washout. Joint practices and the preseason were canceled, and as No. 3 on the depth chart he never took a regular-season snap. When Wentz went down, the former Washington star initially inherited the No. 1 job.

But he's been splitting reps this week with rookie Sam Ehlinger, a sixth-round draft pick, and that's the plan for Friday and likely Sunday. Ehlinger is more athletic and has better touch, which were evident again Thursday.

“Both Sam and Jacob, I thought, were really solid," coach Frank Reich said. “They both had touchdown passes in that last period. I just felt like there was some pretty good execution, all things considered. It was their first go-around ... going against an NFL defense."

And, naturally, there was a minor skirmish when Colts receiver Michael Pittman Jr. was grabbed from behind as he was walking toward the Colts huddle.

Still, both coaches — and the three quarterbacks — managed to see what they needed.

“I thought early on, on offense, we were really sort of hesitant," Rhule said. “I think guys like Christian (McCaffrey) got real upset about that and helped us kind of get out of that and wake up a little bit."