No preseason, no problem: NFL rookies shine in strange year 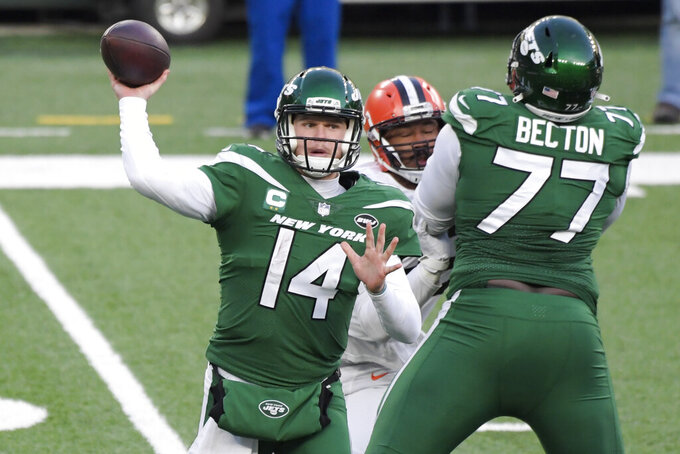 Facing fourth-and-goal at the 1 in the third quarter against the Los Angeles Rams, the New York Jets turned to veteran Frank Gore — along with rookie Mekhi Becton.

The critical play called for Gore to run behind Becton, a 6-foot-7, 363-pound left tackle and the 11th overall pick in the 2020 draft. Becton stonewalled five-time All-Pro defensive tackle Aaron Donald and created enough of a hole for Gore to power into the end zone for his 100th career touchdown. It gave the Jets a 20-3 lead and was instrumental in their first victory of the season.

“It was great because that’s what I strive for,” Becton said. “I want to have everything on my shoulders. I want the ball to be behind me in clutch situations like that.”

Becton is among dozens of rookies who have made significant impacts this season, disproving the notion that losing preseason games and organized team activities because of the coronavirus pandemic would negatively affect first-year players.

Instead, they broke records and raised eyebrows across the league. Washington’s Chase Young, Los Angeles’ Justin Herbert, Tampa Bay’s Tristan Wirfs and Minnesota’s Justin Jefferson are at the top of what’s shaping up to be a stellar rookie class, a group that features several franchise quarterbacks, playmakers on both sides of the ball and quite possibly the best collection of offensive tackles in decades.

Young and Jefferson made the Pro Bowl, and surely more rookies would have joined them as alternates at the league’s now-canceled all-star game.

Young has 42 tackles, including 6½ sacks, and no play showcased his ability more than his 47-yard fumble return for a touchdown at San Francisco in Week 14. The defensive end scooped up the football as smoothly as a major league middle infielder, gripped it in his left hand as if it was a track baton and pulled away from everyone chasing him.

And that was only part of the big picture for the second overall pick.

“It’s crazy unusual for a rookie, I think, to have the type of leadership that Chase has, genuine leadership,” Washington quarterback Alex Smith said. “I think a lot of young guys, especially high picks, I think you feel pressure to do it some way or somehow. I think Chase is so comfortable in his own skin and being who he is.

“I think guys respect that, but it’s rare to have a guy that young step in and really affect his teammates as positively as he has. He’s definitely unique.”

Jefferson has 79 catches for 1,267 yards and seven touchdowns, helping the Vikings replace Stefon Diggs and build their most prolific offense since Daunte Culpepper and Randy Moss shared the spotlight in 2004.

“Everything about that kid is special,” Minnesota running back Dalvin Cook said. “He’s got special written on him. ... Carries himself like a five-year vet. You can’t tell the difference. If you put him in the locker room with the vets, you would think he’d fit right in.

“I haven’t seen him shy away from any big moment. I love being around him, that’s my brother. I think he’s just scratching the surface.”

Herbert has cooled off over the past five weeks, but he still has the Chargers believing they amply replaced Philip Rivers and found a staple at the all-important position for years to come. Cincinnati feels the same way about top pick Joe Burrow, who threw for at least 300 yards five times in 10 games and accounted for 16 touchdowns before tearing ligaments in his left knee in November.

Wirfs has been so good — aside from a Week 5 showing against Chicago star Khalil Mack — that he’s considered an outside candidate to become the first non-skill-position player to earn NFL’s Offensive Rookie of the Year honors.

“He’s playing at a Pro Bowl level, and that’s what we anticipated,” Buccaneers coach Bruce Arians said. “He’s doing it week in and week out, so that’s kind of what I expect every week now.”

Wirfs, Becton, Cleveland’s Jedrick Wills, Miami’s Austin Jackson and Andrew Thomas of the New York Giants have started a combined 67 games this season — Wirfs at right tackle and the others at left.

Wirfs and Wills have been the best of the bunch, but not by much.

“Talk about a rookie coming in, starting every game and just being focused,” Browns Pro Bowl guard Joel Bitonio said of Wills. “Has it been perfect? No, but the way he competes ... a lot of the stuff he has done has been on an island one on one. It has been impressive.”

So have many of his rookie classmates.

“We’re growing and we’re starting to get a hang of the game,” said Dolphins right tackle Robert Hunt, a second-round pick and one of six Miami rookies starting on offense.

“We’re starting to get better and understanding the game a little more. This is a game that you’ve got to grow, and I think we’re all growing. We’re rookies still, but we’re definitely growing.”