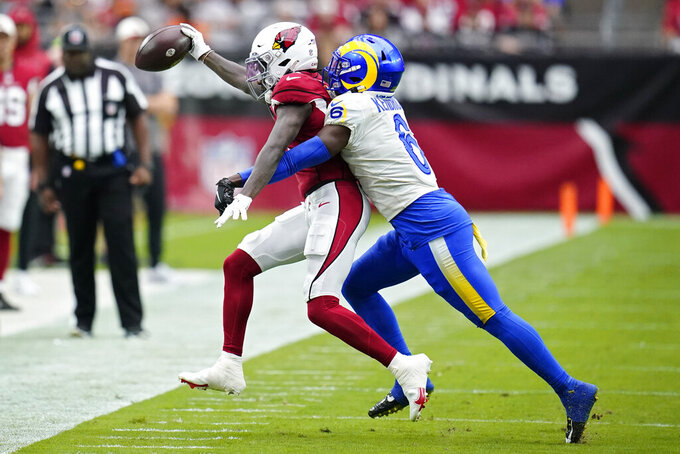 Then again, not many Arizona Cardinals quarterbacks have.

The Panthers have owned the series matchup against the Cardinals, winning 14 of 19 games, including six straight victories. They’ve defeated Arizona in each of the last three seasons — twice with Murray as the starting QB — and six straight times overall dating to 2015 by a whopping average margin of 35-17.

Two of those wins came in the playoffs, including the 2015 NFC championship game in which the Panthers destroyed the Cardinals 49-15 to reach their second Super Bowl.

“It means something,” defensive end Brian Burns said. “I would say from the history we have always had their number and always had it out for them.”

You have to go back to 2013 when Carson Palmer was playing quarterback for the Cardinals’ last win against the Panthers.

Of course, right now both teams are simply thinking about getting back to .500 after starting the season 1-2 when they meet Sunday at Bank of America Stadium.

Panthers coach Matt Rhule knows getting a win against Murray won't be easy. Rhule called Murray one of the great quarterbacks in the league, citing his “magical” ability to extend plays as he did earlier this season in an overtime victory over Las Vegas.

Rhule also remembers facing Murray in college when the QB threw six touchdowns and ran for another score in Oklahoma's 63-33 win over Rhule's Baylor Bears.

“I saw him do things in college that made me just want to walk off the field,” Rhule said. “We sacked him and knocked the ball out of his hands, it bounced on the ground three times; he picked it up and threw it for an 18-yard first down. He’s one of the most amazing players I’ve ever seen.”

Murray is still a young quarterback, but he’s far from a rookie.

Murray was the No. 1 overall pick out of Oklahoma in 2019. He’s already a two-time Pro Bowl selection and helped lead the Cardinals to a playoff berth last season.

He said he has learned a lot over 50 games, but the biggest is simply perseverance.

“You’ve just got to keep going,” Murray said. “Control what you can control. Obviously, we’ve had a lot of ups and downs. But it’s a long season — one game doesn’t make or break you. The team knows that, the locker room knows that, so you can’t dwell on how we feel right now.”

The Cardinals are very thin at receiver right now with injuries to A.J. Green and Antoine Wesley.

After Green left last Sunday’s game against the Rams with a knee injury, the Cardinals were left with the 5-foot-7 Greg Dortch and the 5-foot-9 Andy Isabella and Marquise Brown.

Arizona coach Kliff Kingsbury hopes Rondale Moore can return this week, which will help. But Moore is also just 5-7, so that doesn’t help the height problem.

“We’ve just got to be smart about how we maximize those guys and utilize them, take advantage of what they do well,” Kingsbury said.

Three-time All-Pro DeAndre Hopkins is also out while he misses the fourth game of a six-game suspension for breaking the NFL’s rules on performance-enhancing drugs.

This season has been a struggle so far for Panthers quarterback Baker Mayfield, who has the second-lowest completion in the league and is 25th overall in QB rating.

Rhule has refused to place all of the blame on his new quarterback, challenging the team's wide receivers to do a better job of getting separation from defenders.

“Get open and the ball will come your way,” Rhule said.

There was a bit of panic from the Panthers when kicker Zane Gonzalez was lost for the year with a groin injury in the preseason.

But replacement Eddy Pineiro, who lost a training camp competition to Greg Zuerlein with the Jets, has been up to the task. He's 7 of 7 on field goal attempts and is perfect on extra points, too.

The Panthers failed to register a takeaway in their first two games, but they turned things around last week against the Saints with three takeaways to get back to even on the season in the turnover differential.

Carolina blitzed more against Jameis Winston and they're expected to use that same strategy to get Murray off his mark Sunday.