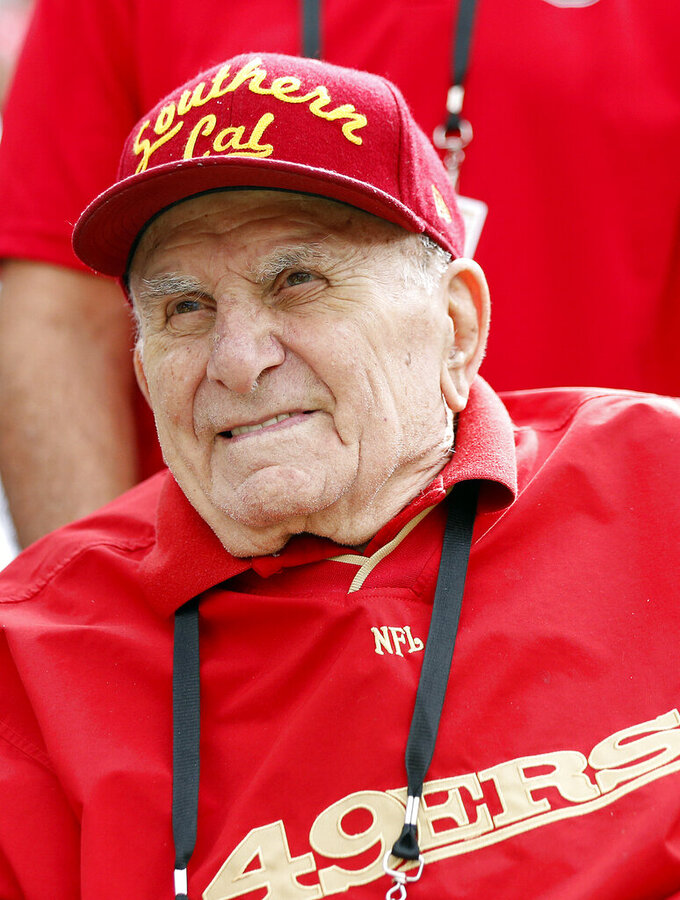 FILE - In this Sunday, Oct. 21, 2018, file photo, former San Francisco 49ers player Paul Salata is seen before an NFL football game between the 49ers and the Los Angeles Rams in Santa Clara, Calif. Salata, who created the Mr. Irrelevant Award that honors the last selection of the NFL draft, after playing football at Southern California and in the NFL and Canadian Football League, died Saturday, Oct. 16, 2021. He was 94. (AP Photo/Josie Lepe, File)

Paul Salata, who created the Mr. Irrelevant Award that honors the last selection of the NFL draft after playing football at Southern California and in the NFL and Canadian Football League, died Saturday. He was 94.

He died of natural causes at home in Newport Beach, California, a day before his 95th birthday, nephew Nick Salata told The Associated Press.

Although the NFL draft dates to 1936, Salata created the Mr. Irrelevant Award in 1976. The player and his family were invited to spend a week in Orange County enjoying activities including a trip to Disneyland and a golf tournament. The honoree received the Lowsman Trophy depicting a player fumbling a football. Kelvin Kirk of Dayton University was the first to be given the title as the 487th pick that year.

“Irrelevant Week” generated so much publicity that in 1979 the Los Angeles Rams, who owned the next-to-last pick, intentionally passed to let the Steelers, with the last pick, choose first. Pittsburgh also wanted the publicity and passed as well. Both teams refused to choose a player until Commissioner Pete Rozelle forced them to pick, with the Steelers winning. That led to the so-called Salata Rule, which bars teams from passing to get the final selection.

In February, a Mr. Irrelevant played in and won a Super Bowl for the first time. Placekicker Ryan Succop of the Tampa Bay Buccaneers started in the game. He was the last pick of the 2009 draft.

Salata was a wide receiver at USC in 1944, ‘46 and ’47. The Trojans won league titles each year and played in the Rose Bowl in 1945, when Salata caught a touchdown in their 25-0 victory over Tennessee. He missed the following season while serving in the Army Air Corps during World War II.

Salata also was an infielder on the Trojans’ baseball team in 1948 that won the school’s first College World Series title. He later played minor league baseball.

He played in the NFL for the San Francisco 49ers (1949-50), Baltimore Colts (1950) and Pittsburgh Steelers (1950-51), catching 50 passes with four touchdowns in his career. He also played in the CFL with the Calgary Stampeders in 1952, earning All-Star honors that season, and with the Ottawa Rough Riders in 1953.

After retiring, Salata worked in construction, notably as a sewer contractor.

Salata appeared in 18 movies primarily in the 1950s, including “Angels in the Outfield” with Janet Leigh. His uncredited appearances included “Singin’ in the Rain,” “The Ten Commandments,” “Stalag 17” and “The Joker Is Wild.”

“Every time ‘Stalag 17' came on TV, we'd watch it for the 800th time," Nick Salata said. “I can picture him coming home to Aunt Beverly and saying, ‘Honey, I’m going to leave football and acting and become a sewer contractor.’ He was a wonderful guy."

Salata is survived by his second wife, Carolyn, son Bradley, daughter Melanie Fitch, two granddaughters and brother George. He was preceded in death by his first wife Beverly in 2003.