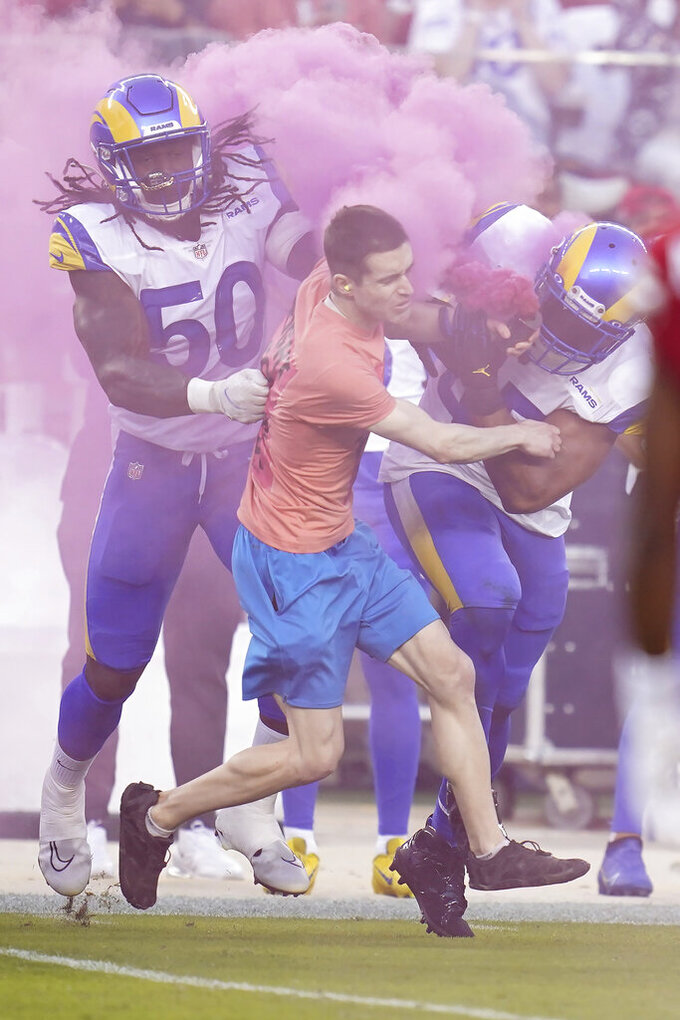 A protester is hit by Los Angeles Rams defensive end Takkarist McKinley (50) and linebacker Bobby Wagner during the first half of an NFL football game between the San Francisco 49ers and the Rams in Santa Clara, Calif., Monday, Oct. 3, 2022. (AP Photo/Godofredo A. Vásquez)

THOUSAND OAKS, Calif. (AP) — A protester who ran onto the field during the San Francisco 49ers' Monday night home game against the Rams has filed a police report after being subdued by Los Angeles linebacker Bobby Wagner.

Santa Clara Police Department Lt. Cuong Phan confirmed to The Associated Press on Wednesday that the department has an active investigation of the incident, which meant he could provide few other details. Wagner reacted with bemusement when asked about the protester's complaint, which was made Tuesday.

“I heard about it, but it is what it is,” Wagner said at the Rams' training complex. “It’s behind me. I ain’t really focused on it. I’m more concerned about the security guard that was hurt trying to chase him. We don’t know what that (pink smoke) is. You’ve just got to do what you've got to do.”

Wagner indicated that players and coaches have a right to be concerned in such situations.

“You just never know,” Wagner said. “People run on the field for no reason sometimes. Again, pretty sure it’s going to keep happening, but you never know what that person has got in their pocket, their hands, whatever. ... There’s consequences for your actions.”

Wagner’s actions have been widely applauded around the NFL, including by San Francisco coach Kyle Shanahan immediately after the game.

“I think that we all know where Bobby’s intentions were, and I support Bobby Wagner,” Rams coach Sean McVay said Wednesday. “I don’t think anybody would disagree.”

Wagner said he was mildly surprised when video of his help with the protester went viral, noting that most field invasions aren't shown on television broadcasts to discourage the behavior. Peyton and Eli Manning even provided play-by-play commentary on Wagner's hit during their ESPN broadcast of the game.

“I think a lot of players want to do it, too,” Wagner said.