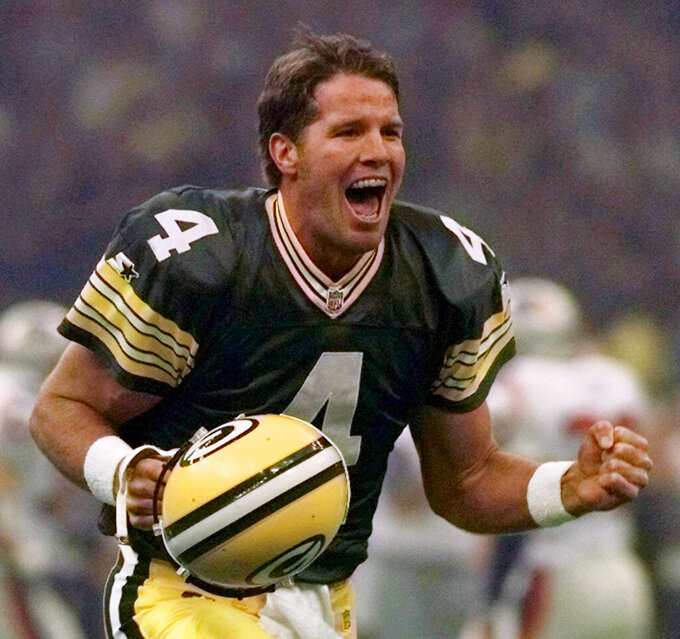 FILE - In this Jan. 26, 1997, file photo, Green Bay Packers quarterback Brett Favre celebrates after throwing a touchdown pass to Andre Rison during the NFL football Super Bowl in New Orleans. Favre looks at the quarterbacks on display this weekend with an admiration as strong as the throws he made as a Pro Football Hall of Fame player. (AP Photo/Doug Mills, File)

Brett Favre looks at the quarterbacks on display this weekend with an admiration as strong as the throws he made as a Pro Football Hall of Fame player.

From Tom Brady and Patrick Mahomes in the Super Bowl, to the likelihood of Peyton Manning entering the same hall, to former teammate Aaron Rodgers perhaps taking a third MVP award. It's quite a collection.

Favre played against Brady, sees some of himself in Mahomes, has been a long-time friend with the Manning family, and, well, Rodgers is his successor in Green Bay, where Favre won three straight league Most Valuable Player honors. Rodgers will find out during NFL Honors on Saturday night, when The Associated Press hands out its individual awards, if he will get the hat trick.

“No question this is the best year statistically for Aaron.” Favre says. "The head scratcher is why they haven’t finished. If I were a betting man, I look at it two ways. Before the Packers-Bucs game, if I were a betting man, I would have a hard time betting against Brady. But there is no question in my mind that the hottest team in football, AFC or NFC, didn't matter, was the Packers.

"Obviously Brady can win against anyone, you don’t bet against him because he will prove you wrong. But I thought, going into Lambeau — earlier in the year when they played the Bucs — the Packers were not playing as well, not as consistent. But here lately they were consistent, and I was thinking this could even be a blowout just because Aaron was playing so well. I don’t know if a quarterback has ever been on top of his game in the last eight weeks like Aaron had.

“There is no question Aaron played the best. He is consistent every year, don’t get me wrong, but statistically speaking he was unbelievable. And his M.O. is lots of touchdowns and lots of points and very little turnovers, and that has always amazed me. I was always a risk taker, gunslinger, whatever you want to call it. Aaron is not that different from the way I played. The big difference is he doesn’t turn the ball over from an interception standpoint.”

Favre, who co-hosts a show on SiriusXM NFL Radio, is eager to hear the Hall of Fame results, while recognizing nobody will be surprised to hear Manning's name as a first-time inductee. Favre has a longstanding relationship with the Mannings, from playing against Peyton and Eli to growing up as a fan of their dad, Archie, at Ole Miss, as well as a friendship with the entire first family of quarterbacking. Favre used to have phone conversations with Peyton when he was a Tennessee Vol.

“When you start talking about just playing the quarterback position, the only thing Peyton didn’t have as far as quarterback, that the new age of quarterback has, is mobility,” Favre explains. "But he had everything else. And savviness. He and I have joked and talked about it.

“I get a kick out of all the mumbo-jumbo stuff he would do at the line — and it worked. Probably the last half of my career I spent more time trying to figure out how to trick the other team, how can I get them offsides or how can I get them to show what they are going to do blitz-wise? ... And I say all that because all that stuff Peyton did, surely (offensive coordinator) Tom Moore didn’t say, `Hey Peyton, come here, let’s do this. I want you to act like you are changing to eight different plays.' Peyton came up with all that and it worked, and statistically I don’t know if he could have been any better for such a long time.”

Long time certainly applies to Brady, in his 21st pro season and 10th Super Bowl, with six rings. Favre was in a similar position to what Mahomes is now — back in January 1998, when he was the youngster coming off a Super Bowl victory and facing the “old-timer” in John Elway.

“My style of play when I was up and coming was very similar to John Elway: arm strength, mobility, leadership and all that stuff was very similar,” Favre recalls. "I took a lot of pride in that and he and I talked about that.

"Much like myself: `John has come close many years, this may be his last opportunity, how would you feel Brett?'

“Don’t get me wrong, I wanted to win the game. I felt like crap when we lost, to be honest with you."