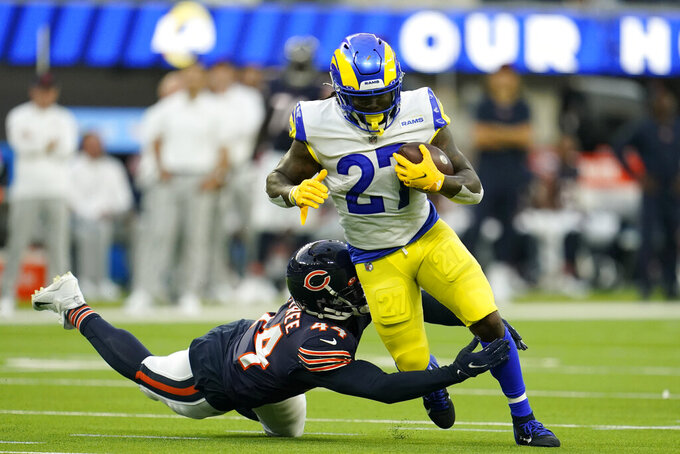 Los Angeles Rams running back Darrell Henderson, above, runs with the ball as Chicago Bears outside linebacker Alec Ogletree defends during the first half of an NFL football game Sunday, Sept. 12, 2021, in Inglewood, Calif. (AP Photo/Marcio Jose Sanchez)

THOUSAND OAKS, Calif. (AP) — Los Angeles Rams running back Darrell Henderson will be a game-time decision against the Tampa Bay Buccaneers on Sunday.

Coach Sean McVay said Henderson’s availability would likely depend on pain tolerance after hurting his ribs on the first play of the fourth quarter in the Rams’ 27-24 win at Indianapolis.

Sony Michel had 10 carries for 46 yards in relief and would likely start against Tampa Bay if Henderson cannot play. Rookie Jake Funk, a seventh-round draft pick, could also be in line for an expanded role.

“Want to use as much time as we have, but we’ve got contingency plans in place. And if that’s the case, then those other guys will be asked to step up,” McVay said Friday.

Henderson has not practiced this week. He has 123 yards rushing and two touchdowns on 29 carries through two games, along with four receptions for 46 yards.

McVay has been preparing as if Henderson will not be available “so it ends up being a bonus if he is able to go,” he said.

If Henderson doesn’t play, the Rams would be without their top four projected backs. Cam Akers, who was expected to start after finishing his rookie season on a strong note, tore his Achilles tendon prior to the start of training camp. Raymond Calais sustained a season-ending foot injury in the second preseason game, and Xavier Jones was waived with an injury designation after hurting his ankle in the final preseason game.

Those injuries, along with a series of scares for Henderson, prompted the Rams to acquire Michel from New England in a trade on August 25.

Michel, who is in his fourth year in the NFL and scored the only touchdown in the Patriots’ Super Bowl win against the Rams in the 2018 season, said his focus this week has been on continuing to refine his understanding of McVay’s offense.

“I gotta be prepared,” Michel said. “Whether I start or not, if I’m not prepared I won’t be good, so my only focus right now is being prepared, learning the playbook, trying to get some extra study in.”

The offense has trended toward the pass to start the season, with Matthew Stafford completing 39 of 56 for 599 yards and five touchdowns against one interception, while the ground game has produced 175 yards on 52 attempts. But Funk is pleased that the Rams have been able to successfully run the ball to close out wins, including what Michel did against the Colts.

“It just shows the capabilities of our offense,” Funk said. “We’re able to have a quarterback like Matthew out there, and then be able to run the ball when it’s needed. So we’re only growing as an offense and I think there’s good things to come.”

If Henderson is inactive, Buddy Howell would likely be called up from the practice squad to give the Rams additional depth. Howell, a fourth-year back from Florida Atlantic, played mostly on special teams for Houston the past three seasons.

Elsewhere, the injury report is favorable. Outside linebacker Leonard Floyd is expected to play after returning to practice Friday. Floyd was held out earlier in the week because of an ongoing ankle injury.

Cornerback Darious Williams missed practice because of a non-COVID-19 illness, but McVay doesn’t expect it will affect his availability against the Buccaneers.