Ravens can bury reeling Steelers with a win in Pittsburgh 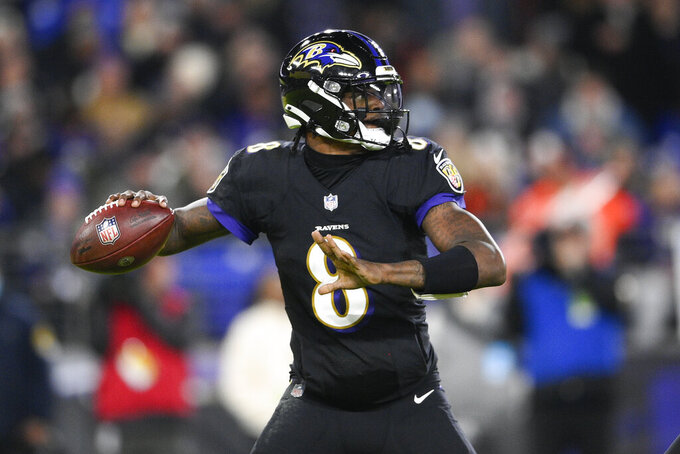 Baltimore Ravens quarterback Lamar Jackson looks to pass against the Cleveland Browns during the first half of an NFL football game, Sunday, Nov. 28, 2021, in Baltimore. (AP Photo/Nick Wass)

BETTING LINE: Ravens by 4, according to FanDuel Sportsbook.

AGAINST THE SPREAD: Baltimore 4-7; Pittsburgh 4-7.

TURNOVER DIFFERENTIAL: Ravens minus-7; Steelers minus-4.

RAVENS PLAYER TO WATCH: T Alejandro Villanueva is in his first season with the Ravens after playing for Pittsburgh from 2014-20. He’s had his struggles with Baltimore, and protecting the passer has been an issue for the Ravens in general.

STEELERS PLAYER TO WATCH: RB Najee Harris has become an afterthought over the last two weeks (20 carries, 61 yards) after being a driving force behind a five-game unbeaten streak that thrust Pittsburgh back into contention (121 carries, 461 yards).

KEY MATCHUP: Pittsburgh’s porous defensive line and the NFL’s 28th-ranked run defense against Baltimore QB Lamar Jackson. The Steelers have allowed a staggering 180.5 yards per game on the ground over the last four weeks.

SERIES NOTES: The longtime AFC North rivals have fought to a draw over the last nine seasons, splitting their last 18 regular-season meetings. ... The Steelers swept the series in 2020, while the Ravens took both games in 2019. ... This is only Baltimore QB Jackson’s third start against Pittsburgh. He engineered an overtime win at Heinz Field in 2019 and committed four turnovers (two fumbles, two interceptions) in a home loss in November 2020. ... Steelers QB Ben Roethlisberger is 15-10 against Baltimore, though his QB rating when facing the Ravens (85.3) is considerably lower than his career average (93.8).

STATS AND STUFF: This is the 30th all-time coaching matchup between Baltimore’s John Harbaugh and Pittsburgh’s Mike Tomlin, the third-most frequent coaching showdown in NFL history. They have a ways to go to catch the leaders. Hall of Famers Curly Lambeau and George Halas met 49 times while coaching Green Bay and Chicago. ... The Ravens have won 12 of their past 13 December games. The one loss was last year’s game at Pittsburgh when Baltimore was dealing with a COVID-19 outbreak and Jackson didn’t play. … The Ravens are 6-1 in games decided by eight points or fewer this season. … Mark Andrews became the fifth TE in NFL history to eclipse 200 receptions, 2,800 yards receiving and 25 receiving TDs in the first four seasons of his career. The others were Antonio Gates, Jimmy Graham, Rob Gronkowski and Kellen Winslow. … Jackson threw a career-high four interceptions last weekend. He’s only had one other game with three — a win at Pittsburgh in 2019. ... The Steelers are riding a three-game winless streak (0-2-1) and likely would see any shot at winning the AFC North vanish with a loss. ... Roethlisberger will move into a tie with former Chargers and Colts QB Phil Rivers for seventh in most games played by a quarterback (244). Roethlisberger moved past Rivers last week for fifth in pass completions (5,298). ... The last time Pittsburgh finished outside the top 20 in yards allowed was 1991. The Steelers are in danger of ending that streak this season barring a stunning turnaround.

FANTASY TIP: Steelers WR Diontae Johnson has been the one constant in Pittsburgh’s up-and-down passing offense. He’s on pace to shatter his career highs in both receptions and yards and is facing the NFL’s worst pass defense.