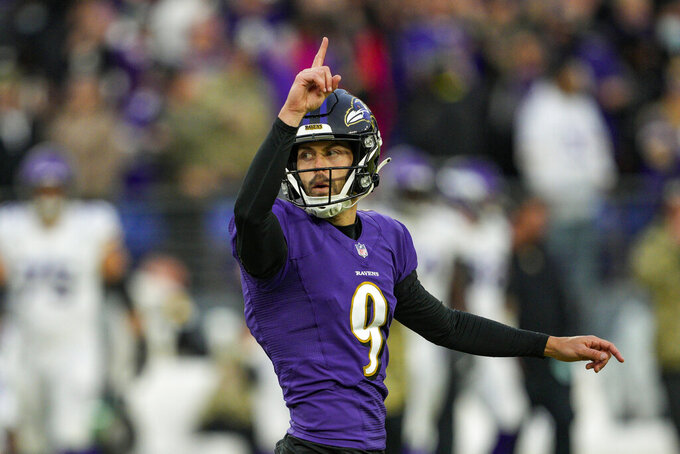 BALTIMORE (AP) — Justin Tucker made his new contract sound about as routine as one of his clutch kicks.

“I joked to (head coach John Harbaugh) one day out at practice,” Tucker said. “We were just kind of just generally talking about the idea. I said, ‘I think something could get done in like five minutes.’ And sure enough, it took about five minutes.”

Tucker and the Baltimore Ravens agreed to a four-year extension worth $24 million. The agreement includes $17.5 million guaranteed for the star kicker, whose previous deal was through 2023.

The contract was part of a feel-good Monday for the Ravens, who also welcomed running back J.K. Dobbins back from the physically-unable-to-perform list.

A five-time All-Pro, Tucker has been a game-changer for the Ravens in his 10 years with the team. He's made a record 91.1% of his field goal attempts, and his 1,360 points are the most ever by a player through his first 10 seasons.

“Justin is beyond what kind of a kicker he is and all of that, I would say the kind of leader he is, the guy he is to be around,” Harbaugh said. “Being out here with the mindset that he takes to it in terms of his work ethic, also his sense of humor, his understanding of the moment. Even in the meetings, he always has some kind of a comment. He laughs at my jokes, which I really appreciate.”

Tucker set another record last year with a 66-yard kick at Detroit that won the game. He is 16 of 16 on field goal attempts in the final minute of regulation and has converted 58 straight in the fourth quarter and overtime, the longest active streak in the league.

“This deal, for sure, checks all the boxes for me, and for all intents and purposes, this is the type of deal that will more than ensure that I will be a Raven for life,” Tucker said. "And for that alone, I couldn’t be happier.”

Dobbins, who missed all of last season with a knee injury, came off the PUP list and was on the field.

“I thought he looked pretty good in individual, first day back. He was out there in individual. You guys saw him moving around, running the ball-handling drill. That will be the first step,” Harbaugh said. "Maybe we add a little bit more every day and kind of see how he handles it, and see how the knee responds. But, it seems like it’s so far so good.”

“He just has a soft tissue type of a deal, a ligament type of a deal in his foot that is not a serious thing, but we want it to be right and healed,” he said. "So, it’s going to take a little bit of time, but it’s not a Lisfranc.”