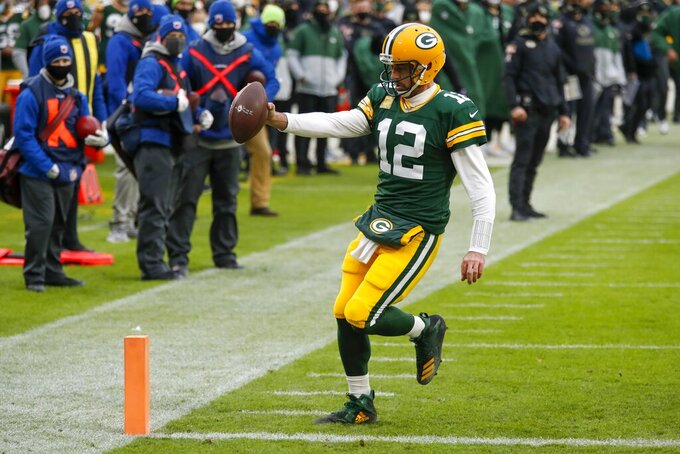 Green Bay Packers' Aaron Rodgers runs for a touchdown during the first half of an NFL football game against the Jacksonville Jaguars Sunday, Nov. 15, 2020, in Green Bay, Wis. (AP Photo/Matt Ludtke)

The NFL Players Association sent out a tweet last week noting that kicker Mason Crosby was the Packers’ new player representative, with linebacker Oren Burks, guard Lucas Patrick and cornerback Jaire Alexander as alternates. Rodgers had been serving as the team’s player rep, though he added Wednesday that “I can’t say I was heavily involved.”

“I think it’s time for somebody else to take that role who wants to spend a week of their life sitting in meetings and going through all that,” the 36-year-old Rodgers said Wednesday. “To me, it’s just not what I want to do at this point in my career.”

Rodgers had been one of the 14 dissenting votes earlier this year when player representatives voted in Indianapolis to send a new collective bargaining agreement to the full union membership. The agreement included a 17-game regular season, higher salaries, larger rosters and bigger pensions for current and former players.

Union members voted 1,019-959 in favor of ratification, which only required a simple majority.

Rodgers said in February via social media that he had dissented based on conversations he’d had with teammates in the locker room. He cited the risks involved in adding a 17th game and the need to add more offseason recovery time, among other factors

“I wasn’t real, real happy about the way things went down, I think from last season, negotiating without a current player in the room," Rodgers said Wednesday. “And then the things that happened in Indy and the way that the vote went, I wasn’t real excited about it.”

NOTES: Wide receivers Davante Adams (ankle) and Allen Lazard (core) were limited participants in Wednesday's practice. Although Lazard was activated from injured reserve Tuesday, Packers coach Matt LaFleur said that doesn't necessarily mean he will play Sunday at Indianapolis. “Whether or not he’s available, we’ll see,” LaFleur said. “The last thing you want to do is put somebody out there in a situation where you could lose him for a longer period of time or it just slows down their progress.”