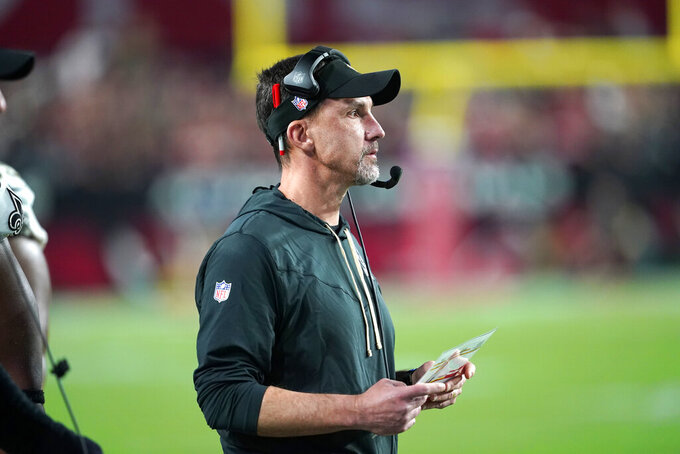 New Orleans Saints head coach Dennis Allen watches from the sideline during the first half of an NFL football game against the Arizona Cardinals, Thursday, Oct. 20, 2022, in Glendale, Ariz. (AP Photo/Matt York) 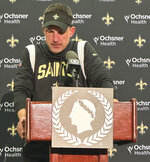 NEW ORLEANS (AP) — Dennis Allen will need the second half of his first season as Saints head coach to go better than the first if New Orleans is to entertain any postseason possibilities.

The good news for Allen and the Saints (3-6) is that they remain just a game out of first place in the NFC South with eight to play — and many teams would take that.

“More consistency is what we're looking for,” said Allen, whose team has lost four times by eight or fewer points. “We haven't done it consistently enough where we put offense, defense and special teams together. And we have had too many games where there's been a phase or two that hasn't operated in a way that we think gives us an opportunity to win.”

Ideally, stars such as receiver Michael Thomas and cornerback Marshon Lattimore would have remained healthy and New Orleans would not have felt compelled to replace season-opening starting quarterback Jameis Winston with Andy Dalton in Week 4.

But Allen has had no such luck and now presides over the first Saints squad to lose as many as six times in their first nine games since 2005 — the season before Allen's predecessor, Sean Payton, was hired.

Payton, who retired after last season, would echo a line from his mentor, Bill Parcells, about how being part of an NFL team can feel like a “crisis or carnival” from week to week.

Take the Saints' past two games. New Orleans looked like a capable and confident team that had a chance to get on a roll after a 24-0 victory over the Las Vegas Raiders on Oct. 30. One week later against Baltimore, New Orleans looked overmatched in a 27-13 loss — its first defeat by more than 10 points this season.

Statistically, the Saints' offense had its worst game of 2022 on Monday night, not reaching the end zone until the inconsequential final minutes. Defensively, New Orleans seldom had an answer for quick and elusive Ravens quarterback Lamar Jackson.

“We have to go back and pick out the things that we were able to do and why we were able to win that game against the Raiders the way that we did, and compare that to (Monday night) and see what was off,” Saints left tackle James Hurst said. "We have to get back to where we were a week ago.”

“We have a lot of hope," Hurst added. “We have the guys who have the character to come in and do everything they can to make sure that this doesn’t happen again.”

And that statement brings to mind another expression frequently uttered by Payton: “We'll see.”

When the Saints aren't hurting themselves with lost turnovers — an NFL-high 17 so far — their offense looks productive. Even after gaining a season-low 243 yards against Baltimore, the Saints ranked sixth in the NFL in yards per game at 377.6. Their 23.6 points per game ranks 11th. The offense is designed and called by coordinator Pete Carmichael Jr., a Payton protégé who has been on the Saints' staff since 2006.

The defense's containment strategy for mobile QBs. Atlanta's Marcus Mariota (72 yards, one TD rushing) and Baltimore's Jackson (82 yards rushing) have given New Orleans trouble. And the Saints still have to contend with Philadelphia's Jalen Hurts in Week 17.

Third-year NFL tight end Juwan Johnson, who played receiver in college at Penn State and Oregon and was not drafted. With nimble footwork along the sideline, he turned a short pass into a 41-yard score for New Orleans' lone TD against Baltimore. He is tied for the team lead in TD catches with three, to go with 23 catches for 258 yards receiving.

Winston might have to start all over again somewhere else next year. He largely struggled in his three starts, two of which he played with a back injury. But even with Winston fully healthy the past few weeks, the Saints haven't looked to work him back into the lineup. Allen made it clear even after Monday night's loss that he sees New Orleans' offense functioning better with Dalton under center.

The Saints have been hampered by injuries to Thomas and Lattimore. Thomas is New Orleans' most accomplished receiver and started the season healthy after missing all of last season and most of 2020 with an ankle injury. But he hurt his toe three games into the season and is on injured reserve.

Lattimore, the Saints' top defensive back, has missed the past four games with an abdomen injury, but Allen said he's “closer” to returning.

“He’s picked up the intensity of his workouts in terms of the rehab process,” Allen said. "He’s working hard.”

Minus 10 — The Saints' turnover differential this season, worst in the NFL.

The Saints enter a two-game stretch against fellow sub-.500 teams, visiting Pittsburgh (2-6) on Sunday before hosting the Los Angeles Rams (3-5).