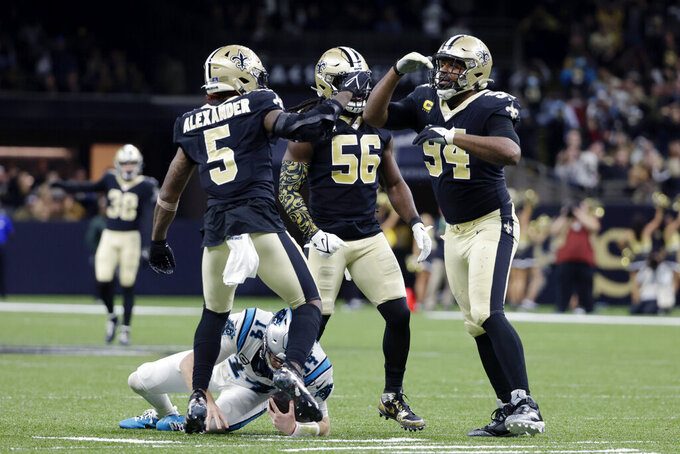 NEW ORLEANS (AP) — Saints linebacker and defensive captain Demario Davis gushes with pride over New Orleans' resilience in the face of a season that has been littered with impediments to success.

If adapting to the retirement of franchise passing leader Drew Brees wasn't hard enough, the club has had to deal with displacement because of a major hurricane, significant injury setbacks to several prominent starters, a couple of suspensions involving starters, a five-game midseason skid and a COVID-19 outbreak affecting key starters and coaches including head coach Sean Payton.

Davis, who has played for three teams during a decade in the NFL, sees this Saints' season as “very unique,” and defined by “a lot of adversity and what could make a lot of people fold or hang it up.”

“But this team has been resilient and continued to fight the entire time,” Davis added. "For this team to go into the last week of the season having a chance to chase the crown is remarkable.”

The loss of Brees' initial successor, Jameis Winston, to a season-ending knee injury was followed soon after by a five-game losing streak that dropped the Saints to 5-7. It's a position to which they were unaccustomed after winning the NFC South the previous four seasons.

Since then, New Orleans has won three of four, despite current starting quarterback Taysom Hill playing with a splint on an injured finger of his throwing hand. The lone loss in that stretch came on Dec. 27 against Miami, when a COVID-19 outbreak robbed the active roster of 16 players. New Orleans responded with a victory on Sunday over Carolina despite have just one season-opening starter on the offensive line.

If the Saints win their regular-season finale in Atlanta on Sunday, and if the Los Angeles Rams win at home against San Francisco, New Orleans will be back in the playoffs — or the “tournament,” as Payton likes to call it — for a fifth straight season.

Payton said when a club puts a premium on players who exhibit exceptional toughness and character, as the Saints try to do, “it's not always for when you're winning two, three, four games in a row, but it also just as importantly allows you to handle adversity, whether it's a stretch of games you're not playing well in or some of the things that showed up this year.”

“The players and staff here have handled a lot of challenging things, not always perfectly, but we've managed to keep our head above water, keep grinding, keep fighting,” Payton said. “You just want to find a way to get into the tournament.”

The pass rush has helped the Saints' defense as a whole considerably. The Saints have 43 sacks, tied for sixth most in the NFL. And the pressure they've been able to get even when they don't take down QBs has been helping stall opponent drives with incompletions and more than a few interceptions. The Saints also are tied for sixth in the NFL in interceptions with 17. Against Carolina, a sack by P.J. Williams on a safety blitz resulted in a red zone turnover and a Saints field goal in a low-scoring game.

The running game was a strength for the Saints' offense early in the season, but hasn't been as effective lately. New Orleans had 73 net yards rushing against Carolina. Hill led the way with 45 yards, but several of his gains came on scrambles, not designed runs.

Kicker Brett Maher hit all four of his field goals against Carolina, all three two weeks ago in a 9-0 victory at Tampa Bay and 13 of 14 overall. His reliability has been crucial to the Saints' success at a time when their offense has struggled to produce touchdowns.

Fill-in offensive linemen Calvin Throckmorton, Will Clapp, Jordan Mills and James Hurst, along with season-long starter Cesar Ruiz, did well enough for the Saints to beat struggling Carolina, but the Saints will need them to play better if several starters up front remain out this week. Hill often didn't look comfortable on his drop-backs and some missed assignments left free pass-rushers at times. Alvin Kamara, meanwhile, had no room to run. He finished with 32 yards on 13 carries, and 30 yards came on one run, meaning he netted 2 yards rushing on his other 12 carries.

Versatile defensive back P.J. Williams appeared to hurt his left ankle later in the game. New Orleans also hopes to get two starters on the offensive line back. Left tackle Terron Armstead has missed six of eight games and three straight with a knee injury. Center Erik McCoy missed the Carolina game because he not cleared COVID-19 protocols but should be back this week. Same goes for safety Marcus Williams. Right tackle Ryan Ramczyk has been on the club's COVID-19 reserve list for more than a week and was trying to rehabilitate a knee injury before that. It's not clear when or if he'll be back.

1 — The number of touchdowns the Saints have scored in their past three games combined. Remarkably, they've won two of them.

The Saints play a Falcons squad that already is out of playoff contention, but whose fans will be urging them to knock the rival Saints out as well. The Saints will be trying to avenge a Week 9 loss in Superdome that was decided by a Falcons field goal as time expired.