Saints know what's broken, but quick fixes have been elusive 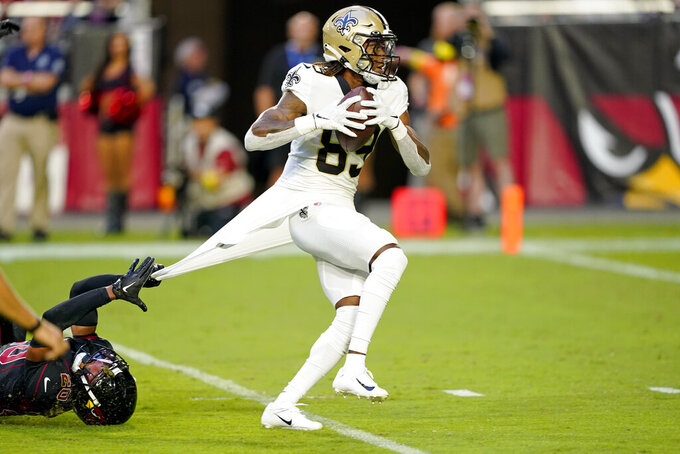 NEW ORLEANS (AP) — Saints coach Dennis Allen gave his players the weekend off while he and his staff try to figure out how to stem the tide of turnovers, missed tackles and other fundamental errors that led to five losses by 10 or fewer points.

Particularly frustrating for Allen is that while he can identify issues preventing his team from winning, the staff hasn't been able to find quick fixes — and Allen suggested Friday there might not be any.

“There’s not this magic pill, this magic formula,” Allen said. “We all live in the microwave society and we want to see things change right away.

"We're working as hard as we can to get it fixed, but yet, I think the process is, you've got to continue to work on it," Allen added. "The results may not be immediate, but eventually those results come.”

The Saints (2-5) have lost five of six games. Four of those losses came by eight or fewer points.

In Thursday night's 42-34 setback at Arizona, three interceptions thrown by Andy Dalton caused a swing of between 14 and 21 points.

The first turnover came in the Arizona end zone on third-and-8 from the Cardinals 10, preventing the Saints from at least setting up for a routine field goal.

The second turnover bounced off receiver Marquez Callaway's hands and helmet, and landed in the arms of Arizona's Marco Wilson, who returned it for a touchdown.

On the last one, Dalton was hit as he threw. The wobbly pass was short of intended receiver Chris Olave. Linebacker Isaiah Simmons snagged it and returned it for another TD.

Those three plays undermined a largely productive night for Dalton and the offense. The Saints scored more than 30 points for the second time in three games and New Orleans outgained the Cardinals, 494 yards to 326, with Dalton passing for 361 yards and four TDs.

“There’s a lot of things that we’ve done well,” Allen said. “We moved the ball extremely well (Thursday) night. We've scored a lot of points in the last few games.

“There's some things we have to clean up so we can begin to win some of these games instead of coming out on the short end,” Allen added.

Minus the turnovers, the offense has been productive on the ground and through the air. During the past four games, the Saints have averaged 417 yards and 31 points.

The Saints have an NFL-worst turnover differential of minus-10. That's twice as bad as the second-worst differential (four teams are at minus-five).

In addition to 16 lost turnovers (nine interceptions and seven fumbles), the Saints are struggling to cause turnovers on defense. New Orleans has intercepted one opposing QB pass this season and recovered five fumbles. One of those recoveries occurred on special teams.

Undrafted rookie receiver and returner Rashid Shaheed. After running for a 44-yard touchdown in his debut on Oct. 16, he caught a 53-yard touchdown pass in his second game.

Olave returned from a concussion and led the Saints with seven receptions for 106 yards, while tight end Juwan Johnson caught two touchdown passes.

Callaway had a rough night. In addition to his failed catch leading to a Cardinals TD, he finished with two catches for 20 yards on six targets. Defensive end Marcus Davenport hasn't had a sack in three games and has just a half-sack this season.

“Obviously, we’ve got some good players that are unavailable to play right now,” Allen said, but he said he and the medical staff had ”optimism" that some of those players would be back by the time the Saints play again on Oct. 30.

28.6 — Opponent points per game, second worst in the NFL.

The Saints play their next two at home, where they've won once this season, starting with a visit by the Las Vegas Raiders on Oct. 30.