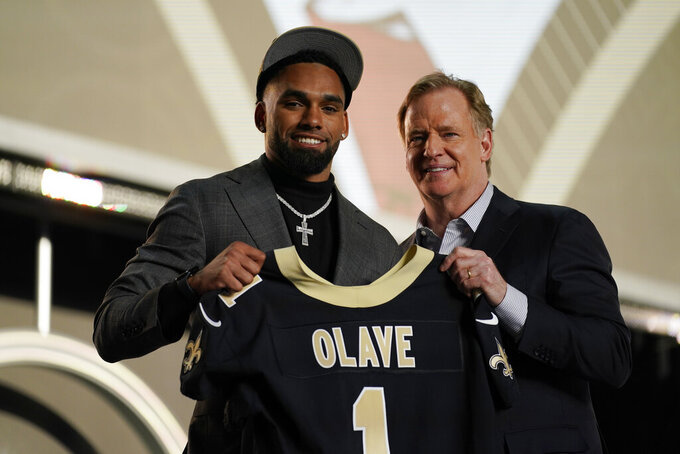 The Saints drafted Olave at No. 11 after trading their third- and fourth-round picks to the Washington Commanders and moving up five spots. New Orleans then landed Penning with the 19th overall pick.

“Chris was a guy that we coveted from the very beginning of this draft process,” first-year Saints coach Dennis Allen said. “He’s tough, smart, competitive, highly polished and one of the better route runners. He’s the one guy I felt like I knew exactly what I’m getting.”

Olave, who caught 65 passes for 936 yards and 13 touchdowns last season, became the highest pick the Saints have used on a receiver since Wes Chandler went third in 1978. Olave is also the first receiver New Orleans has drafted in the opening round since Brandin Cooks at No. 20 in 2014.

Olave set an Ohio State record with 35 career receiving touchdowns, the fourth most in Big Ten history, and ranks third on the school’s all-time list in catches (176) and fifth in receiving yards (2,711).

Wide receiver was considered a huge need for the Saints, who did not have a wideout gain as many as 700 yards in 2021. Marquez Callaway led the team with 698 yards and six touchdowns. Returning wideout Michael Thomas, another Ohio State product and the NFL offensive player of the year in 2019, did not play in 2021 with an ankle injury that also sidelined him for nine games in 2020.

Olave will be another option for quarterback Jameis Winston. The Saints re-signed Winston in March after pursuing former Houston quarterback Deshaun Watson, who ultimately chose Cleveland.

Winston, replacing the retired Drew Brees, went 5-2 as a starter last season before a season-ending ACL tear in his left knee.

“I feel like I have a lot of strengths in my game,” Olave said. “It’s just being a complete receiver. I can play the slot or outside, and I just want to make plays at the end of the day.”

Penning is their fourth first-round blocker in the last eight years, joining Andrus Peat (2015), Ryan Ramczyk (2017) and Cesar Ruiz (2020). They also took offensive lineman Erik McCoy with their top pick in 2019, when they did not have a first-rounder.

“There’s not many offensive linemen that are as physical as I am,” Penning said. “I’m a combination of power, strength and athleticism.”

After dominating the competition at Northern Iowa, Penning improved his draft stock significantly with a strong showing in practices at the Senior Bowl, drawing the ire of the linemen he blocked with his aggressiveness.

“The last box he had to check was can he do it against higher-level competition,” said Jim Nagy, executive director of the Senior Bowl. “He came down here and had a great week and was the same physical bully that he was at the FCS level.

“There’s no false tough guy about him. He’s truly nasty."

The 6-7, 325-pound Penning will get a chance to start at left tackle, replacing Terron Armstead, who signed with the Miami Dolphins in March. Armstead was a second-team All-Pro selection in 2018 and played nine years in New Orleans. He started all 91 games he played from 2014 to 2021. Armstead had a hard time staying healthy, though, missing 39 games in that span.

Penning, who had no offers from Football Bowl Subdivision schools coming out of high school, started his final three years at Northern Iowa and worked his way into a projected mid-first-round status. He likely will compete with James Hurst, who started 15 games at multiple line spots for the Saints last year.

“We were kind of holding our breath a little bit,” Allen said. “We had a couple of guys on the board, but he was a guy that if he were sitting there at 19, we were going to take.”

Barring another trade, the Saints will have only one pick Friday on the second day of the draft—No. 49 in the second round