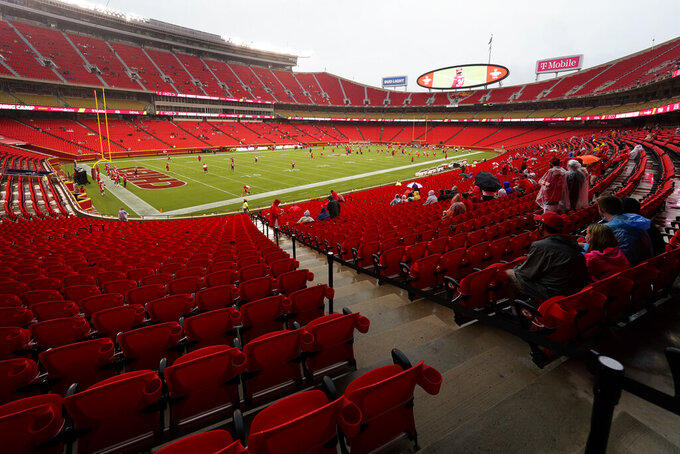 KANSAS CITY, Mo. (AP) — The Kansas City Chiefs examined the layout of Arrowhead Stadium and did some math. They talked with state and local health officials, monitored the spread of COVID-19 over the summer, then did some more calculations.

All that work spit out the most seemingly random number: 22.

That's the percentage of capacity that the Chiefs will allow through the gates at Arrowhead next week when they raise their Super Bowl championship banner before opening the NFL season with a Thursday night game against Houston. The number equates to roughly 17,000 fans — another seemingly random number — in the cavernous stadium.

Dozens of college and professional sports teams hoping to allow at least some fans into their facilities in the next few weeks are faced with the same question: What is the magic number that allows for proper social distancing? That avoids crowding at entrances and exits? That keeps concourses somewhat clear?

That allows fans to sit in seats to safely cheer on their teams?

“We understand that we've got to get this right," Chiefs president Mark Donovan acknowledged. “We've got to be very diligent in our processes and our protocols in order to be successful, in order to have another game with fans, and we know other teams and leagues are looking at us.”

There is nothing straightforward about the coronavirus pandemic, though. And when it comes to settling on a number for attendance, the amount of variables that go into the equation would tie mathematicians in knots.

Start with the guidance teams and leagues receive from experts. What the Chiefs hear from the Centers for Disease Control and Prevention could differ from what they are told by the Jackson County Health Department, in part because there are so many ideas about how the virus is contracted and spread.

Location is another factor. Health officials may feel confident where the number of positive cases is relatively low while nearby their counterparts are nervous because cases are spiking. Just this week, Iowa State announced and then dropped plans to allow up to 25,000 fans into its season-opening football game as the state faces skyrocketing numbers.

There is no one-size-fits-all approach, either.

In South Carolina, venues ranging from Darlington Speedway to Memorial Stadium at Clemson must submit a plan to the Department of Commerce that lays out how they settled on their attendance number. The speedway seats 47,000 but was approved to have 8,000 for the start of NASCAR's playoffs on Sunday (17% of capacity), while the University of South Carolina has received approval for 20,000 people in 82,500-seat Williams-Brice Stadium for the Gamecocks' opening game against Tennessee on Sept. 26 (24%).

“Everyone is sending in their plans that provide an explanation of all the protocols, how they are using all the guidelines and rules," South Carolina Gov. Henry McMaster said.

“We can’t eliminate all risk,” he added, “but the plan Darlington turned in, I think it will work. And the extent that it works, will have an impact on future events.”

The situation in South Carolina demonstrates another variable in determining the magic number: the facility itself.

Some stadiums have wider concourses than others. Some have more gates, meaning less congestion. Some have second and third decks, or premium seating and luxury boxes, that break up the vast ocean of regular seating. Some even have wider seats than others, creating a head-spinning number of considerations.

That's a big reason why Arrowhead Stadium settled on 22% of capacity while Sporting Kansas City, the Major League Soccer team just across the state line in Kansas, determined that 14% of capacity (about 2,500 fans) is appropriate.

Are any of these magic numbers actually safe?

“These stadiums are massive, so 20-30% is often in the tens to 20,000 people,” said Lucia Mullen, an epidemiologist and analyst for the Johns Hopkins University Center for Health Security. “That's larger than we've had really to date in most venues right now. And we know this virus, it's very capable of spreading within people quite quickly. And so with just that small amount of people, if it's allowed to spread, it could reach huge numbers in a community.”

Mullen suggested another factor in determining the magic number: the ability to do contact tracing. If several people test positive for COVID-19 after attending a game, there must be a manageable number of tickets sold — and a way to get in touch with those fans — so that they can pinpoint the potential spread.

“You're bringing people from different communities to one area,” Mullen said, “and then they're going to at the end of the game go back to their communities. And so there's two big risks. The first is if they're bringing the virus with them and then allowing it to circulate in the community where the game is. Or as an individual, if they happen to contract the virus at a game and then they bring it back to their community and allow it to spread there.”

The University of Kansas announced this week that it would not allow any fans into Memorial Stadium when the Jayhawks host Coastal Carolina on Sept. 12. In Virginia, the number of fans for the Cavaliers' home opener against North Carolina State will be capped at 1,000. But at Tennessee — home to giant Neyland Stadium, whichs seats 102,455 — officials have determined that 25% of capacity is the magic number they are comfortable with.

“We have been consulting with state and local officials throughout the process," Tennessee associate athletic director Tom Satkowiak said.

The ability to learn from successes — and failures — ultimately will be crucial to allowing fans back in greater numbers nationwide. And that's why organizations such as the Chiefs, who will be the first NFL team to host a game this fall, understand they will be under the microscope.

It's why they put plenty of money — for signage, safety glass at concession stands and myriad other precautions — and even more thought into determining how they will welcome fans.

“It's critical that everyone follows protocols," Donovan said, “and if they do, we're confident in this.”