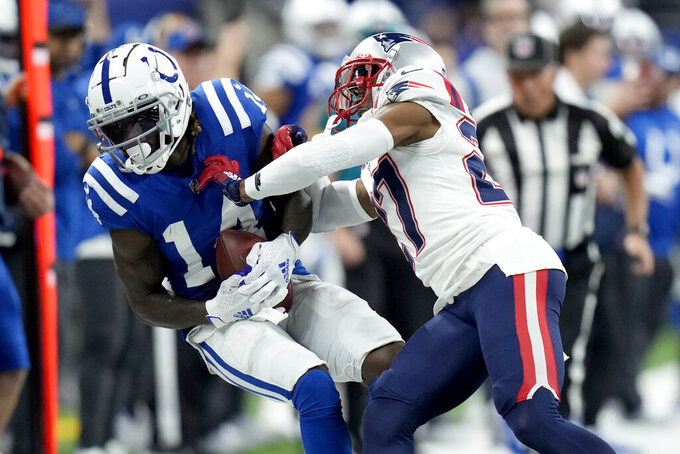 Indianapolis Colts wide receiver Zach Pascal (14) is knocked out of bounds by New England Patriots cornerback J.C. Jackson after catching a pass during the first half of an NFL football game Saturday, Dec. 18, 2021, in Indianapolis. (AP Photo/AJ Mast)

He anticipated defensive mastermind Bill Belichick would stack the line of scrimmage and dare the Indianapolis Colts to beat them with the passing game as he's done to so many other opponents.

This time, Taylor turned the tables. The second-year running back rushed for 170 yards, including a 67-yard touchdown run with 2:01 left to seal Indy's 27-17 victory over New England.

“I think it just says we’re a team that’s going to come in and play 60 minutes, four quarters of hard football and we’re not going to give up till the clock hits zero,” Taylor said after logging 29 carries. “It was just all out effort.”

Taylor’s performance may have changed their season season, too. By winning for the fifth time in six games and snapping an eight-game losing streak against a bitter rival, Indy (8-6) solidified its playoff hopes with another crucial conference victory.

He's run for a score in 11 straight games, tying Hall of Famer Lenny Moore for the longest streak in franchise history.

Nobody inside the Colts locker room was surprised by his stat line — or the epic highlight of Taylor breaking through the line, eluding a tackle and sprinting to the front corner of the end zone..

“I almost called a pass there because I thought we needed a first down and I talked it over with Marcus Brady and said ‘No, let's call one more pass,'" coach Frank Reich said referring to his offensive coordinator. “There's no way anybody’s catching him."

For the Patriots (9-5), it marked the end of a seven-game winning streak and dropped them out of the No. 1 slot in the AFC playoff chase. And it was mostly of their own making.

A bevy of uncharacteristic mistakes put the Pats in a 20-0 hole and Taylor's long run made sure they couldn't come all the way back.

The game had a little bit of everything — drama, physical play, shouting matches, even a fight that led to the ejections of Patriots safety Kyle Dugger and Colts receiver Michael Pittman Jr.

But Indy won this one by stealing a page out of Belichick's playbook — using the ground game to chew up the clock and closing it out with a back-breaking play in the waning minutes. It was Indy's first win over New England since 2009.

“I’ve said it like five times, I can say it another five times," Belichick said. “We didn’t do anything well enough to win tonight."

Taylor and the Colts had the upper hand from the start. They opened the second series with seven straight running plays before Taylor took a direct snap, handed off to Carson Wentz and then Wentz flipped the ball to Nyheim Hines for an 8-yard scoring pass and a 7-0 lead.

Matthew Adams followed that by blocking Jake Bailey's punt that E.J. Speed recovered in the end zone for a 14-0 lead — New England's largest deficit since a Week 3 loss to New Orleans. Two field goals made it 20-0 early in the third.

“It seems like they just had good force on the play," New England special teams star Matthew Slater said. “That’s tough when you give up plays like that, it’s going to be hard to win. We spotted a team 20 points at their place. Good luck trying to win. There’s no excuse to play like that."

Rookie quarterback Mac Jones finally answered with a 12-yard TD pass to Hunter Henry and after Nick Folk's short field goal made it 20-10, Jones hooked up with Henry for a 7-yard scoring pass with 2:21 left.

Belichick opted to kick it deep and two plays later, Taylor closed it out.

Colts: Center Ryan Kelly missed his second straight game after being activated off the reserve/COVID-19 list Tuesday. Reich explained Kelly was out because of a personal matter.

Patriots: New England's NFL record streak of scoring in the first half of 99 consecutive games ended. .. The Patriots also failed to score 30 points against Indy for the first time in 10 games, leaving them in a tie with Kansas City, which did it nine straight times against Denver from 1964-68 in the AFL. ... Jones was 26 of 45 with 299 yards, two touchdowns and two interceptions in the first road loss of his career.

Colts: Speed became the first NFL player to record two touchdowns off blocked punts in one season since Ed Reed in 2003. ... ... Indy added two more totals to its league-leading total and now has at least one takeaway in 15 consecutive games. ... Wentz was 5 of 12 with 57 yards with one TD and one interception as the Colts rushed for 226 yards on 39 carries.

Colts: At Arizona next Saturday night.