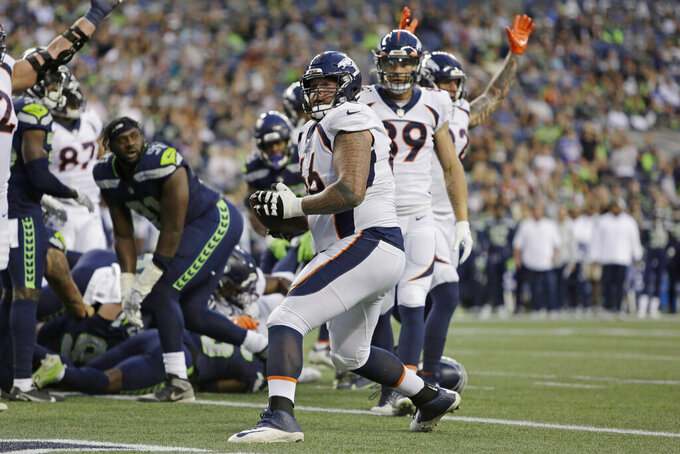 Denver Broncos offensive guard Dalton Risner holds the football after he recovered the ball after Broncos running back Javonte Williams scored a touchdown during the first half of an NFL preseason football game against the Seattle Seahawks, Saturday, Aug. 21, 2021, in Seattle. (AP Photo/Jason Redmond)

SEATTLE (AP) — Teddy Bridgewater is trying not to get caught up or focus on being in the middle of the Denver Broncos' quarterback competition.

Bridgewater has made a pretty strong case with his play through two weeks of the preseason that he should be the one under center come Week 1.

“I just want to get in the end zone because at the end of the day if we’re getting in the end zone that means we’re finishing drives and we’re getting points, and everything else will take care of itself,” Bridgewater said. “I can’t get caught up in, ‘Man, you know, this decision has to be made.’ This is football to me.”

Bridgewater made another statement in his case to be Denver’s starting quarterback, leading a pair of touchdown drives in the Broncos’ 30-3 preseason win over the Seattle Seahawks on Saturday night.

Given first billing in the competition with Drew Lock and playing with most of Denver’s starting offense, Bridgewater showed poise and command on a night the Broncos dominated against mostly a crew of Seattle backups.

And a decision about who will be the starter for the season opener at the New York Giants could be coming soon.

“Both of them, Drew and Teddy, have done well, as you guys have seen, and they’ve made it a hard decision,” Denver coach Vic Fangio said. “So we’ll give it thorough thought. We’ve been discussing it with the coaches, with (GM) George (Paton) all along and we’ll continue to do that.”

Bridgewater was 9 of 11 for 105 yards and a touchdown in his two drives leading the Broncos offense. He found Jerry Jeudy for 35 yards on fourth down on Denver’s first possession, stepping away from a blitz and allowing the second-year receiver to separate from Ahkello Witherspoon in coverage. Bridgewater capped the drive with a 2-yard TD pass to KJ Hamler.

Denver’s second possession was highlighted by Bridgewater’s 21-yard pass to Eric Saubert to the Seattle 1 that was placed just over the top of Seahawks starting linebacker Jordyn Brooks in defense.

That drive ended with left guard Dalton Risner getting credit for a touchdown after Royce Freeman fumbled at the 1 and Risner carried the loose ball into the end zone.

“See a guy like Dalton take the ball from the running back, score a touchdown, he's celebrating, the energy it's contagious,” Bridgewater said.

Lock got the start last week against Minnesota and threw a pair of touchdowns, but found more difficulty playing with Denver’s reserves. Lock was 9 of 14 for 80 yards. His biggest highlight was a scrambling backhanded pass to Seth Williams that went for 34 yards and led to a field goal.

“Teddy did a good job and it was about me just going out there and making the best of each play that I got,” Lock said.

While the vast majority of the Broncos starters saw at least a little bit of playing time, the Seahawks continued to keep most of their stars as spectators. Russell Wilson, DK Metcalf, Chris Carson, Bobby Wagner, Quandre Diggs and Jamal Adams all went through pregame warmups before putting down their helmets and watching.

Seattle coach Pete Carroll indicated that more of his regulars would get some playing time in the preseason finale next week.

“We’ll go back to a lot of the other guys that haven’t played in the first two games to prepare them for game one of the regular season. That’s been the plan all along,” Carroll said.

Seattle had two offensive starters — center Kyle Fuller and left guard Damien Lewis — get a handful of snaps in the first half. Seattle had about a half-dozen starters or significant contributors on defense get playing time, a few into the second half.

Alex McGough started at quarterback, but threw two interceptions and also lost a fumble. McGough was 9 of 13 for 91 yards passing. Veteran Sean Mannion took over in the second half and went 13 of 23 for 118 yards.

Seattle suffered a couple of significant injuries to a pair of reserves with linebacker Ben Burr-Kirven and wide receiver John Ursua both leaving on a cart during the first half due to knee injuries.

Carroll did not have specifics, but said both injuries were serious.

Burr-Kirven was hurt on the opening kickoff on a non-contact play and was expected to be a lock for the 53-man roster due to his contributions on special teams.

Ursua was in competition for the final spot at wide receiver, but went down late in the first half away from the play. Before getting hurt, Ursua had three catches for 34 yards.

Seattle backup safety Ryan Neal also went to the locker room in the first half following a big hit with a strained oblique and did not return to the game.

Denver backup cornerback Michael Ojemudia left in the second half with a knee injury.

Seattle played in front of fans at home for the first time since Week 17 of the 2019 season. Seattle played all of last season without fans in attendance. The crowd was announced at more than 68,000 tickets distributed but roughly 50,000 were in the stadium.

Broncos: Host the Los Angeles Rams to finish the preseason next Saturday.

Seahawks: Host the Los Angeles Chargers in the preseason finale next Saturday.