Titans get late pick to beat Commanders, win 3rd in a row 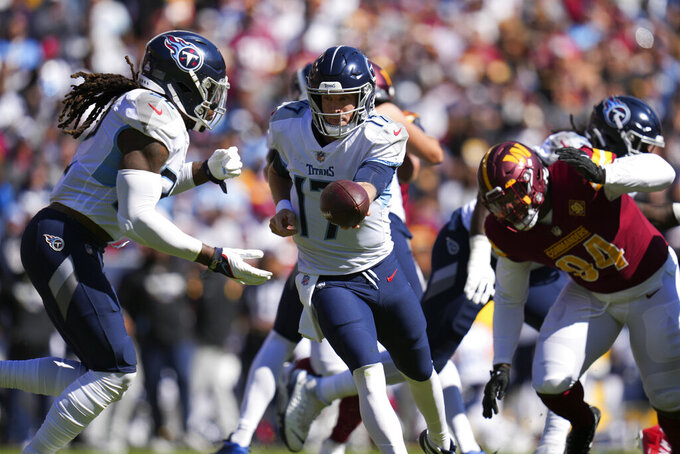 Tennessee Titans quarterback Ryan Tannehill, center, hands the ball off to running back Derrick Henry in the first half of an NFL football game against the Washington Commanders, Sunday, Oct. 9, 2022, in Landover, Md. (AP Photo/Jess Rapfogel)

LANDOVER, Md. (AP) — A teammate yelled at David Long Jr. from a corner of the locker room, “Keep that game ball!”

He wasn’t letting it out of his grasp.

Long intercepted Carson Wentz at the 1-yard line with 6 seconds left to preserve Tennessee’s third win in a row, 21-17 over the Washington Commanders on Sunday. Derrick Henry again got his team rolling, and Long's play concluded a goal-line stand that vaulted the Titans (3-2) into first place in the AFC South.

“We never panic,” Long said of a defense that has made two game-saving plays in the past three weeks. “This is what we do it for. This is what you dream of. Don’t panic. Somebody made a play, and we walk off the field. It just ended up being me.”

The interception, Wentz’s sixth of the season, sealed a fourth consecutive loss for the Commanders (1-4) and overshadowed his two touchdown passes to Dyami Brown.

“Guy made a heck of a play,” said Wentz, who was 25 of 38 for 359 yards, including 76 on the final drive. “I just tried to squeeze it in there to J.D. (McKissic). Heck of a play. That was an emotional roller coaster. I thought we had six points when it left my hand and then the result. That was unfortunate.”

Well before Long was the hero, Henry racked up 102 yards on 28 carries and had two catches for 30 yards, one of them a screen pass that set up Dontrell Hilliard’s 13-yard touchdown reception in the first quarter. He surpassed 100 yards on the ground for the second consecutive game, and the Titans improved to 24-3 when Henry reaches that mark.

“I’m going to be me each and every Sunday,” Henry said.

When Henry got into the end zone in the third quarter, it was Tennessee’s first second-half touchdown since the season opener. It also tied him with Earl Campbell for second on the franchise TDs list with 73, one back of Eddie George.

Leaning on Henry allowed the Titans to compensate for Ryan Tannehill getting sacked five times. It helps that they’re a league-best 10 of 11 in the red zone.

“These games are going to be tight,” said Tannehill, who was 15 of 25 for 181 yards and the TD pass to Hilliard. “There’s a lot of belief when we get down there we’re going to score.”

The Commanders were 1 of 11 on third down, including the interception, and are now last in the NFC East.

“We have dug a hole but at the same time there’s a lot of games left, a lot of football,” Wentz said. “The NFL is crazy. We try not to look at what happened the last couple games and what’s ahead. We just got to go 1-0 each week. We’ve dug ourselves a hole. We did it to ourselves.”

Wentz made arguably his best pass of the season to connect with Brown for a 75-yard score. It’s the longest first career TD reception for a Washington player since running back Matt Jones in 2015.

Tannehill found Nick Westbrook-Ikhine on a 61-yard completion that was the Titans’ longest offensive play of the season.

“I knew it was 1-on-1, so it basically was just a trust throw, giving my guy a chance to go up and make a play on the football,” Tannehill said.

Commanders rookie running back Brian Robinson Jr. made his NFL debut six weeks to the day he was shot twice in the right leg in an attempted robbery in Washington. Robinson got a rousing ovation when he was the last player to be introduced and finished with 22 yards on nine carries as the team’s leading rusher.

“I really can’t explain the feeling of getting back out on the field,” Robinson said. “Today everything finally came to the light, and I’m just so blessed to be back out there.”

Robinson returned to practice Wednesday after spending the first four games of the season on the non-football injury list. The team activated the third-round pick out of Alabama on Saturday.

Titans: DE Denico Autry missed some time in the third quarter with a back injury. He returned at the start of the fourth. ... Three starters were inactive: LB Zach Cunningham (elbow), S Amani Hooker (concussion) and LG Nate Davis (knee/foot).

Commanders: RB Jonathan Williams was ruled out with a knee injury at the start of the fourth quarter. ... RT Sam Cosmi did not play after undergoing hand surgery earlier in the week.

Titans: Have a bye week before hosting the AFC South rival Indianapolis Colts on Oct. 23.