Titans have chance for 2nd straight season sweep of Colts 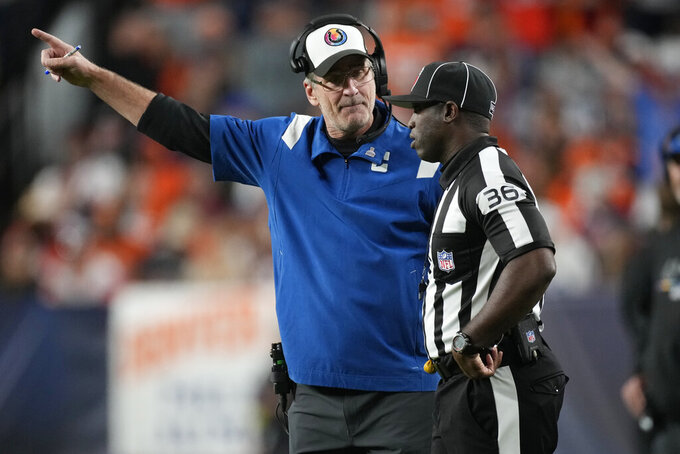 BETTING LINE: Titans by 2½, according to FanDuel Sportsbook.

TURNOVER DIFFERENTIAL: Colts minus-5; Titans plus-1

COLTS PLAYER TO WATCH: QB Matt Ryan. In leading the Colts' rally to victory, Ryan completed 42 passes for the Indianapolis record at a franchise where Peyton Manning has a statue out in front of the home stadium. Ryan topped the mark held by Manning and Andrew Luck by two. Ryan also is tied with Minnesota's Kirk Cousins for the second-most game-winning drives this season with three.

TITANS PLAYER TO WATCH: RB Derrick Henry. He has scored at least one touchdown in four straight games and put together back-to-back 100-yard rushing games. He has 73 total touchdowns, including three receptions. Henry is tied with Pro Football Hall of Famer and former NFL MVP Earl Campbell for second on the franchise's career TD list with 73 and can match Eddie George's franchise record with one more TD.

KEY INJURIES: Colts LB Shaquille Leonard is dealing with a concussion, an injured back and had his nose broken in the Colts' first game with the Titans. Colts RB Jonathan Taylor has missed two straight with the ankle injured against Tennessee. Colts RB Nyheim Hines is working through the concussion protocol that kept him out of the previous game. Tennessee should have two starters back in OLB Bud Dupree from an injured hip and S Amani Hooker who has cleared the concussion protocol. Starting LB Zach Cunningham could miss his third straight game with an injured elbow.

SERIES NOTES: The Titans swept the season series in 2002 in the first year these teams became division rivals in the new AFC South. Then the Colts, with Peyton Manning and then Andrew Luck, took control. They reeled off winning streaks of seven, five, 11 and then three more. Then the quarterback carousel picked up in Indianapolis. Tennessee lost the first three in this series after hiring Mike Vrabel as coach. Now the Titans have won four straight and five of the past six. A win Sunday would be only the fourth season sweep by Tennessee as division rivals, and this is the second game between these teams in four weeks.

STATS AND STUFF: The Colts are tied with Philadelphia for second in the NFL with 94 plays of 10 yards or longer. ... The Colts rank third in the NFL forcing opponents three-and-out 18 times, trailing only San Francisco (22) and Green Bay (21). ... This is the fifth of six division games for the Colts. ... The Titans are 4-0 coming off a bye under Vrabel and have won six straight after a bye. That's second in the NFL only to Buffalo's streak of seven straight. ... Titans have scored 11 straight TDs on trips inside the red zone. ... The Titans are allowing 2.0 yards rushing per carry over their past two games combined with 81 yards on 40 rushes. ... Titans DT Teair Tart leads the team and is tied for second among all NFL defensive linemen with five passes defended. Tart intercepted a batted pass in the previous game between these teams. ... The Titans are the NFL's only team with three different players with at least 3 1/2 sacks in Denico Autry and Rashad Weaver with four and Jeffery Simmons with 3 1/2.

FANTASY TIP: Henry. The 2019-2020 NFL rushing leader has run for at least 100 yards in five of his past six games against the Colts. The exception was last Halloween when Henry finished with only 68 yards on a broken right foot.