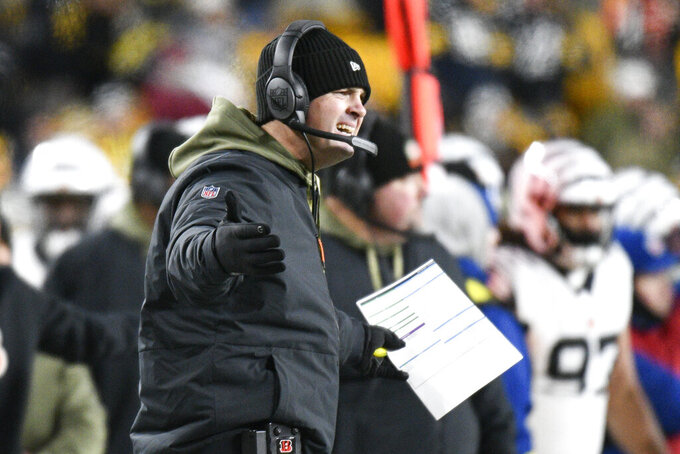 Cincinnati Bengals head coach Zac Taylor reacts to a call against the Pittsburgh Steelers during the first half of an NFL football game, Sunday, Nov. 20, 2022, in Pittsburgh. (AP Photo/Don Wright) 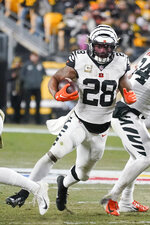 TURNOVER DIFFERENTIAL: Bengals plus-1; Titans plus-2

BENGALS PLAYER TO WATCH: QB Joe Burrow was 24 of 39 for 355 yards last week, becoming the third-fastest player in NFL history to reach 10,000 passing yards. He tied his career high with four TD passes.

TITANS PLAYER TO WATCH: QB Ryan Tannehill threw for a season-high 333 yards with two TD passes last week. That was his 25th game with 300 or more yards passing.

KEY MATCHUP: The Bengals rank third in the NFL in scoring an average of 26.5 points a game. The Titans have the NFL's longest active streak of holding opponents to 20 points or fewer in seven straight games despite using 25 different starters.

KEY INJURIES: Bengals RB Joe Mixon (concussion) did not practice all week and will miss this game. ... Bengals WR Ja'Marr Chase returned to practice and could play his first game since hurting his hip Oct. 16. ... Cincinnati DT Josh Tupou (calf), S Dax Hill (shoulder) are questionable. ... Bengals OT Isaiah Prince (elbow) has been cleared to practice after being put on injured reserve Sept. 3. ... Titans DL Denico Autry (knee) is expected to miss at least a game or two. ... Titans C Ben Jones is working through the concussion protocol after missing a game. ... K Randy Bullock missed the last game with an injured right calf and was listed as questionable. The Titans activated undrafted rookie K Caleb Shudak to practice while he remains on the physically unable to perform list. ... Titans CB Kristian Fulton (hamstring) couldn't finish the previous game and was questionable after being limited at practice.

SERIES NOTES: This is a rematch that won’t count nearly as much as last January’s 19-16 divisional loss to Cincinnati as the AFC’s No. 1 seed. Cincinnati went on to win the AFC title and lost the Super Bowl to the Rams. The Titans lead the series 40-36-1, but the Bengals have won four of the past five. The Titans have played only Pittsburgh more (80 games) than Cincinnati in franchise history.

STATS AND STUFF: This will be the 1,000th-game all time for the Tennessee franchise counting 960 regular-season games and 40 playoff games since its start in 1960. The Titans will become the 17th NFL team and fourth original AFL franchise to reach that mark. ... The Titans are the NFL's only undefeated team with nine or more days between games since 2018, going 9-0 in that span. ... The Bengals also started 0-2 as Tennessee. Cincinnati has won four of its past five. ... Mixon’s primary backup, Samaje Perine became the first Bengals running back with three TD catches in a game. ... The Bengals had scoring drives of 92 and 93 yards in the win over the Steelers. .... ... Bengals K Evan McPherson connected on field goals of 45, 54 and 44 yards and now has converted 14 of 18 field-goal attempts. ... The Titans have won seven of their past eight games. ... They are the NFL's only team with a 7-3 or better record over the past 10 games in each of the past three seasons. ... Titans WR Treylon Burks had his first 100-yard game with seven catches for 111 yards. ... Titans WR Robert Woods had a season-high six catches last week. ... Titans DT Jeffery Simmons has had a sack in four of his past five games.

FANTASY TIP: Derrick Henry. He just became the fifth RB in NFL history with at least 10 rushing TDs in five straight seasons. He had 132 yards from scrimmage last week and threw the third TD pass of his career. He also leads the NFL in both carries and with 1,010 yards rushing.