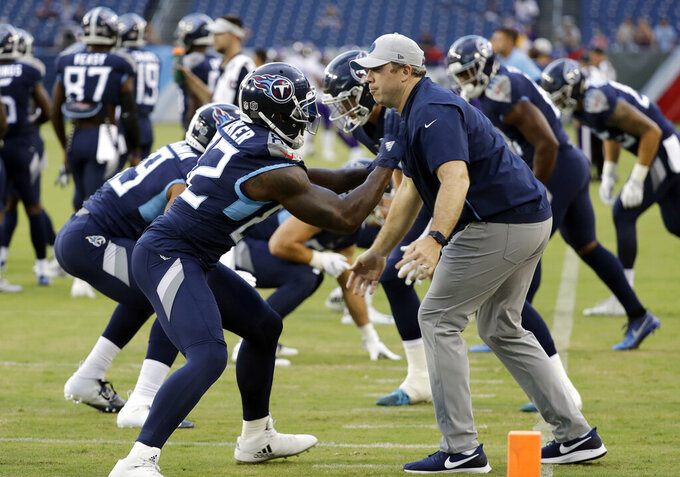 Vrabel announced the promotion Monday, saying he's excited for both Smith and the Titans to promote a "deserving coach."

"I was impressed throughout the season in game-plan meetings with his ideas, in-game with his understanding of situations and the ability to get the most out of his position group," Vrabel said. "We spent a good bit of time last week talking about this opportunity. He has a great deal of familiarity with our players, and the continuity of the offense will allow our players to continue to develop and improve."

This is the first time for Smith as a coordinator, and he will be the fourth different coordinator and fifth play-caller for Titans quarterback Marcus Mariota going into his fifth NFL season in 2019. Keeping Smith allows Vrabel and the Titans to limit the changes in a season where they have to decide on Mariota's future.

The Titans (9-7) left LaFleur's replacement with plenty of room for improvement. They ranked 25th in total offense, 27th in points scored per game and 29th in yards passing.

Smith, 36, has been with Tennessee since 2011, hired by four different head coaches. He started as defensive quality control coach in 2011 under Mike Munchak and has worked for Ken Whisenhunt, Mike Mularkey and Vrabel. Smith switched to offense in 2012 as quality control coach. Smith assisted with the offensive line and tight ends in 2013 and became assistant tight ends coach in 2014.

When Mularkey replaced Whisenhunt in November 2015, Smith took over the tight ends and coached the group through 2018 under Vrabel.

"Everything will happen for you all of a sudden and you'll be thankful you don't give up ," three-time Pro Bowl tight end Delanie Walker wrote on Twitter. "Blessings are coming believe that #congratulations to my new OC and friend looking forward to getting back to work."

Smith's biggest challenge came in 2018 when Walker broke his right ankle in the season opener followed by Jonnu Smith, the Titans' No. 2 tight end, suffering a season-ending knee injury, in early December. Between 2014 and 2017 with Smith, Walker ranked third in the NFL with 3,585 yards receiving and second with 307 catches.

Without Walker, the Titans' tight ends caught 67 passes for 750 yards and seven touchdowns.

Smith started his coaching career in 2006 as a graduate assistant at his alma mater, North Carolina. He spent 2007 and 2008 as a defensive quality control coach with the Washington Redskins and was an administrative assistant and defensive intern in 2010 at Mississippi. A native of Memphis and son of FedEx founder Fred Smith, Smith was an offensive lineman in college.