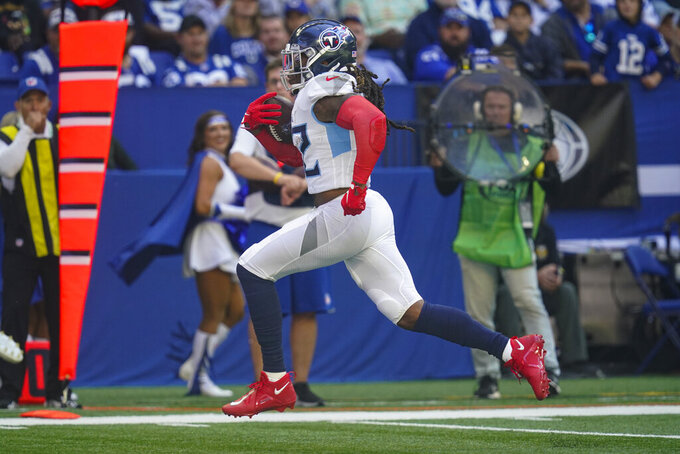 Tennessee Titans running back Derrick Henry runs in for a touchdown against the Indianapolis Colts in the first half of an NFL football game in Indianapolis, Fla., Sunday, Oct. 2, 2022. (AP Photo/Darron Cummings)

BETTING LINE: Titans by 2½, according to FanDuel Sportsbook

TURNOVER DIFFERENTIAL: Titans even; Commanders minus-6

TITANS PLAYER TO WATCH: WR Robert Woods. The easy choice would be Derrick Henry with the two-time NFL rushing champ coming off his first 100-yard game this season, but Woods will be leaned on even more heavily with rookie WR Treylon Burks dealing with turf toe on his left foot. Woods tore the ACL in his left knee Nov. 12, but the offseason trade acquisition from the defending champion Rams is leading the Titans with 13 catches for 167 yards through four games. Woods also just caught his first TD pass from Ryan Tannehill in the previous game, and he has the Titans’ longest play this season on a 41-yard catch.

COMMANDERS PLAYER TO WATCH: Rookie RB Brian Robinson Jr. Robinson could make his NFL debut six weeks to the day since he was shot twice in the right leg in an attempted robbery in Washington. Robinson was on pace to earn the starting job before the shooting, and the Alabama product gives the Commanders a different look running between the tackles than Antonio Gibson. Robinson's presence could also open up room for Gibson, a converted receiver, to be more involved in the passing game with Carson Wentz.

KEY MATCHUP: Henry against Washington's defense. Henry is coming off his best rushing performance and didn’t appear happy with the Titans’ struggles in the second half. Washington is giving up 116 yards rushing per game, but the Titans seem to be clicking better while blocking for Henry with an offensive line that now has three new starters after left tackle Taylor Lewan suffered his second ACL injury in three seasons. Henry has rushed for a TD in three consecutive games.

KEY INJURIES: The Titans now find themselves thin at wide receiver with rookie Treylon Burks expected to miss time with a toe injury. ... OLB Bud Dupree (hip) also has left each of his past two games early. With the bye ahead, giving him another week to heal is likely. ...S Amani Hooker was limited in practice Wednesday and is working his way out of the concussion protocol. ... ILB Zach Cunningham could miss a second consecutive game because of an elbow injury. ... Washington coach Ron Rivera expects rookie WR Jahan Dotson to miss a game or two with a hamstring injury. RT Sam Cosmi is also expected to be out after undergoing hand surgery. Cornelius Lucas is next in line to start on an already banged-up offensive line on to its third starting center.

SERIES NOTES: The Titans are 13-5 against the NFC since Mike Vrabel became head coach in 2018. ... This is Tennessee's first game at Washington since 2014. ... Henry will face two former Alabama teammates in Commanders defensive linemen Jonathan Allen and Daron Payne. ... Vrabel against Washington's Ron Rivera is a coaching matchup of two former linebackers.

STATS AND STUFF: The Titans are the second NFL team since 2000 and first since the 2011 Patriots to score a touchdown on their opening possession in each of their first four games. ... The Titans have scored on each of their first three possessions the past two games, including the first four in their win against Indianapolis. ... Tennessee has scored eight consecutive TDs when inside the red zone. ... QB Ryan Tannehill posted a career-best 81.0 percent completion rate with at least 20 passing attempts, going 17 of 21 for 137 yards and two TDs in last week’s win against the Colts. ... The Titans held the Colts to 38 yards rushing. Reigning NFL rushing champ Jonathan Taylor was limited to 42 yards on 20 carries. ... DL Denico Autry had two sacks, a team-high five quarterback pressures and a forced fumble. ... DL Teair Tart had his first career interception last week. ... OLB Rashad Weaver leads Titans with a career-high four sacks. ... Rookie Ryan Stonehouse leads the NFL with a 56.2-yard gross punting average. ... The Commanders will wear their new burgundy jersey for the first time since the organization revealed the new name. ... Washington has not been above .500 through five games in any of Rivera’s three seasons in charge. ... Wentz has been sacked a league-high 17 times. He has thrown for eight TDs and five INTs through four games. ... Gibson is averaging 3.3 yards a carry. ... Top WR Terry McLaurin has been targeted 27 times and has 14 catches. ... Dotson leads the Commanders with four TD catches. ... The expected offensive line of Charles Leno, Saahdiq Charles, Nick Martin, Andrew Norwell and Lucas is the fifth different starting combination in as many games. ... Allen had a team high-tying eight tackles against the Cowboys, including four for loss. He and Payne each have two sacks this season. ... LB Cole Holcomb has made five-plus tackles in nine consecutive games. ... P Tress Way pinned a career high-tying five punts inside the 20 at Dallas.

FANTASY TIP: If Robinson plays, the roles for Gibson and McKissic are uncertain. Robinson may be on a pitch count of sorts, but Rivera and offensive coordinator Scott Turner are big fans, and he'll get leaned on sooner or later.