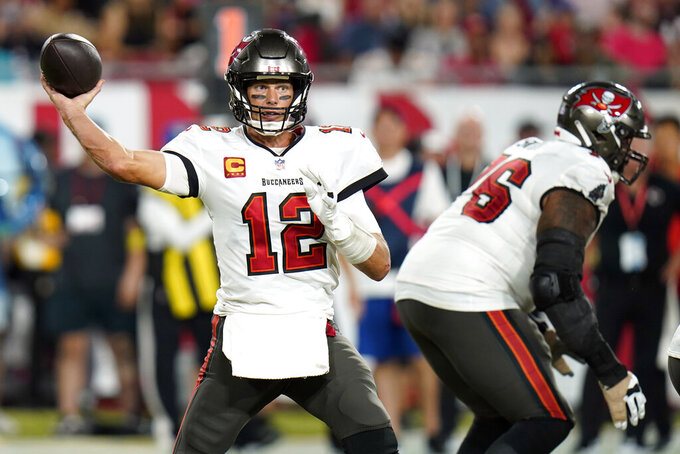 Only problem for the Buccaneers was the defense couldn’t stop Patrick Mahomes and the rest of Kansas City’s offense.

The Chiefs scored touchdowns on four of the first five possessions and didn’t punt until late in the fourth quarter in a 41-31 win over the Buccaneers on Sunday night. They also had a pair of short TD drives, starting from Tampa’s 21 after Rachaad White fumbled the opening kickoff and from Tampa’s 20 after Brady was strip-sacked in the second quarter.

“We didn’t play well. They did a good job and kicked our butts all over the field. Turnovers had nothing to do with it,” Bowles said.

The bright spot for the Buccaneers (2-2) was Brady and the offense finally got going after totaling three TDs in the first three games. Tampa found the end zone four times. The 45-year-old Brady completed 39 of 52 passes for 385 yards and three TDs.

“A little bit better than the way we’ve been playing but, obviously, not good enough,” Brady said. “We’re here for one reason, not to move the ball, we’re here to score more points than the other team. ... We didn’t do a good job in the run game. We could’ve done a lot better in the pass game. We just have to get to work.”

The Bucs had just 3 yards rushing on six carries. They’re averaging just 65.3 yards rushing per game this season. Leonard Fournette netted minus-3 yards on his three carries against the Chiefs.

“It’s not just one thing. I’m sure it’s several things. We have to take time to evaluate it and do a better job,” Brady said. “We’re not going to throw all the time. We have plenty of good, capable runners. We have a line that does a good job in the run game. We just haven’t found a rhythm there.”

After opening the season with road wins at Dallas and New Orleans, the Buccaneers have lost two straight at home. Last week, the offense couldn’t do much in a 14-12 loss to Aaron Rodgers and the Green Bay Packers.

Evans was outstanding, catching eight passes for 103 yards and two TDs. Godwin had seven receptions for 59 yards before he was banged-up again. Jones was targeted twice, catching one ball, and only played one down in the second half because he got nicked up.

“When we’re throwing and catching the ball well, we’re able to move the ball and get the ball in the end zone,” Brady said. “That’s going to pay dividends down the road.”

The Buccaneers had a difficult week, heading to Miami for practice because of Hurricane Ian and they weren’t sure until Friday that they were playing at home instead of in Minnesota.

Nobody made that excuse. They were outplayed start to finish.

Next up for the Bucs is another home game against the Atlanta Falcons (2-2).