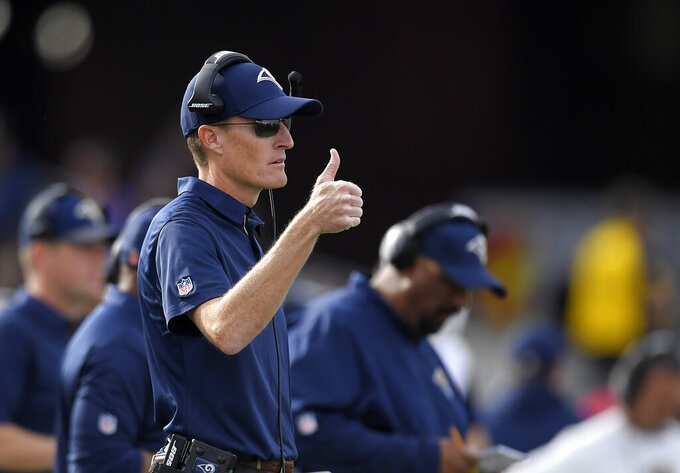 FILE - In this Dec. 10, 2017, file photo, Los Angeles Rams special teams coordinator John Fassel gestures during an NFL football game against the Philadelphia Eagles, in Los Angeles. Fassel's fingerprints were all over the Rams' NFC championship game victory, from the fake punt to the 57-yard winning field goal. Los Angeles' peerless special teams coordinator isn't saying whether he's cooking up something for the Super Bowl, but Fassel's units are a major part of the Rams' success. (AP Photo/Mark J. Terrill, File)

THOUSAND OAKS, Calif. (AP) — Johnny Hekker, Greg Zuerlein and Jake McQuaide have a ritual during the Los Angeles Rams' flights home from road victories. While their teammates celebrate up front in the first-class section, the Rams' punter, kicker and long snapper stay out of the way by retreating to the front row of the coach cabin.

The modesty is admirable, but those big guys living it up in the large seats realize what they owe to the specialists in the back — and to the coach whose pursuit of special-teams perfection and trickery has been a huge asset to the Rams on their way to the Super Bowl.

John Fassel's fingerprints were all over the Rams' NFC championship game victory. From the flawless fake punt to the winning 57-yard overtime field goal, the players coached by Los Angeles' formidable special teams coordinator made a major impact on that 26-23 win in New Orleans.

"It's a big boost," coach Sean McVay said. "It enables you to be more aggressive because of the confidence you have."

Fassel, the Rams' interim head coach for three games in 2016, strives to make sure the entire team is invested in the success of the Rams' special teams. He is eagerly backed by McVay, who kept Fassel on staff two years ago after replacing him in the top job.

"It's a super-big source of pride for me, because it's my job, but I also love it," Fassel said. "I just try to let them know it's professional football, but it's still a lot of fun, and you are important."

Fassel doesn't know whether the Rams have more trick plays in their special-teams repertoire than other teams, or whether they're simply just better at executing those deceptive game-changers. He smiles, but refuses to say whether the Rams will cook up anything special for the Super Bowl.

"Our repertoire of fakes depends on the game, really," Fassel said. "You could have none in, you could have four in. It depends."

The Rams' specialists are among the NFL's best groups, with Zuerlein's booming leg particularly standing out. Hekker, Zuerlein and McQuaide all made the Pro Bowl last season.

But Los Angeles' capacity for trick plays largely depends on Hekker, a former high school quarterback with a strong passing arm. His ability opens up a world of possibilities for Fassel — and the whole world got a look at that creativity early in the second quarter in New Orleans.

Los Angeles was down 13-0 with a stagnant offense at the Superdome before Hekker threw a pass to cornerback Sam Shields for a first down on a perfect fake punt, prolonging the Rams' first scoring drive.

"It's just our mindset that we have," Hekker said. "By any means, we're going to try and get something going. Sean saw an opportunity. We had a great matchup, Sam with a person one-on-one guarding him. Sam can stop on a dime, and we've practiced that all year, so it was just a great moment for us to call that."

Hekker is no ordinary punter: He led Bothell High in suburban Seattle to the state championship game before walking on at Oregon State as a punter. He is also Zuerlein's holder, which means Hekker has been able to sling passes on fake punts or fake kicks since 2012 — the same year Fassel and Zuerlein arrived in St. Louis.

Hekker's career regular-season passing numbers would be a pretty solid half for Jared Goff: He is 11 of 19 for 156 yards and a 102.1 passer rating, including one touchdown. His pass in New Orleans was his first in a playoff game, but his fifth already this season.

"If you didn't know any better, he looks like a quarterback," McVay said. "He's got a nice, natural (throwing) stroke. He can make big-time plays. He can do a variety of different things with that athleticism, not exclusive to throwing it, but also being able to run."

The Rams' special teams culture permeates the entire roster and even affects veterans.

Cory Littleton first caught the coaches' eye with strong special teams play, and he has continued to contribute this season even after becoming a starting linebacker. Littleton is the Rams' leading tackler, but he earned a Pro Bowl selection this season as a special teams performer.

Shields, who joined the Rams this season after nearly two years out of football due to concussions, has eagerly accepted roles on special teams. That's how Shields ended up essentially as a receiver — the position he played in college at Miami before carving out a Pro Bowl career as a cornerback.

"A lot of guys in here just want to do anything they can to help this team win," Shields said. "If that's on special teams, that's great. Let's do it."

Hekker, Zuerlein and McQuaide stuck to their tradition on the flight home from New Orleans. They gathered in the extended-legroom seats in coach, quietly enjoying the success while their teammates lived it up in first class.

"We had a lot of great conversations, just reliving the moments together," Hekker said. "But we ended up dying down and watching movies by the end of it."