Uncertainty abounds in AFC South as Titans attempt to repeat 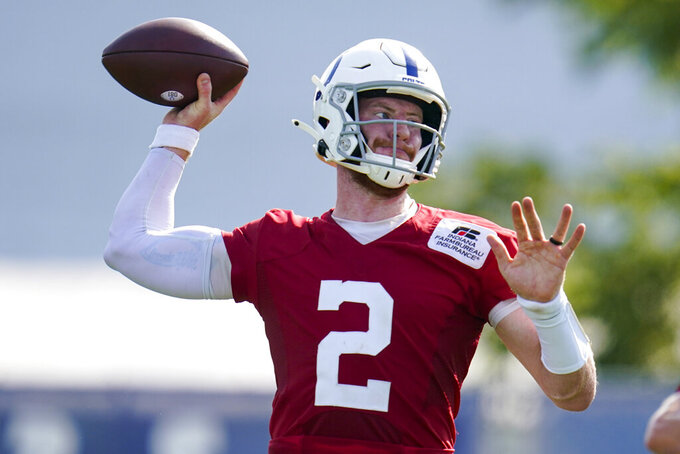 The NFL’s lone division with two playoff teams in each of the last four years is dealing with significant changes heading into the 2021 season. Two new head coaches, three new offensive coordinators, three new quarterbacks and several prominent cleats to fill could put the South’s postseason streak in jeopardy.

Throw in a few key preseason injuries and it’s hard to predict how the division will shake out.

This much is clear: Derrick Henry and the Tennessee Titans are favored to repeat, according to FanDuel Sportsbook, despite replacing OC Arthur Smith, who took the head job in Atlanta, and revamping a defense that was one of the worst in franchise history.

“To win this division, you go to Nashville and you see what the Titans have,” Jaguars defensive coordinator Joe Cullen said.

Tennessee's offseason was relatively uneventful compared to what transpired in Indianapolis, Houston and Jacksonville.

The deal reunited Wentz and Colts head coach Frank Reich, who worked closely together during Wentz’s breakout 2017 season in Philly.

But the move looked questionable a few months later when Reich revealed Wentz needed surgery to remove a bone fragment from his left foot. And that was just one of many injury woes for the Colts, who have linebacker Darius Leonard (ankle), guard Quenton Nelson (foot), left tackle Eric Fisher (Achilles) and defensive lineman Dayo Odeyingbo (Achilles) recovering from surgery. They also are dealing with COVID-19 issues.

Houston and Jacksonville, meanwhile, dealt with coaching turnovers that could lead to more roster upheaval.

The Jaguars hired three-time college national champion Urban Meyer to follow Doug Marrone and had the No. 1 overall draft pick for the first time.

Both teams are in rebuilding mode, with all eyes on a pair of former Clemson quarterbacks. Houston is waiting to see what happens with Watson, who is facing nearly two dozen lawsuits alleging sexual assault and harassment. And the Jaguars are counting on Trevor Lawrence to end a decades-long search for a franchise quarterback.

Here are some other things to know about the division as it enters another season that likely will be affected by COVID-19:

Watson’s future with the Texans remains unclear. He reported to the training camp in late July to avoid being fined. Watson signed a four-year, $160 million contract extension with the team in 2020 and led the NFL in passing yards last season. But before the lawsuits were filed, he had asked to be traded.

It’s unlikely any team would touch him right now. In the meantime, the Texans are going with journeyman Tyrod Taylor. Taylor is with his fifth team in eight years, having been replaced by Josh Allen in Buffalo, Baker Mayfield in Cleveland and Justin Herbert in Los Angeles.

The Titans brought in former Philadelphia defensive coordinator and Detroit head coach Jim Schwartz as a senior defensive assistant, and officially gave the coordinator title to Shane Bowen, who unofficially held the job in 2020.

But that was just the beginning of the team’s defensive makeover. The Titans let Jadeveon Clowney walk after he failed to produce a sack in eight games and ended up on injured reserve. They replaced him by signing Pittsburgh’s Bud Dupree and Indy’s Denico Autry in free agency. Tennessee also signed veteran Janoris Jenkins and drafted fellow cornerbacks Caleb Farley and Elijah Molden to shore up the back end.

The Titans are counting on those additions paying immediate dividends for a unit that gave up 439 points last season, the fourth most in franchise history. If it happens, Tennessee might have a shot at reaching the AFC title game for the second time in three years or possibly doing more.

“That’s the expectation: To go to the Super Bowl and win it," safety Kevin Byard said.

The AFC South had three 1,000-yard rushers in 2020, including two rookies. NFL Offensive Player of the Year Henry led the NFL with 2,027 yards and 16 touchdowns. Indy's Jonathan Taylor was third in league with 1,169 yards rushing, two spots higher than Jacksonville's James Robinson (1,070).

All three running backs had little help and even less competition for carries. Taylor and Robinson, though, aren't likely to be one-man shows again. Colts veteran Marlon Mack returns after tearing an Achilles tendon in last year's season opener, and the Jaguars added Carlos Hyde to share some of Robinson's workload.

“Watch out for him,” Taylor said of Mack. “That’s all I’m going to tell you.”