Wallace back in familiar starting spot in Bills secondary 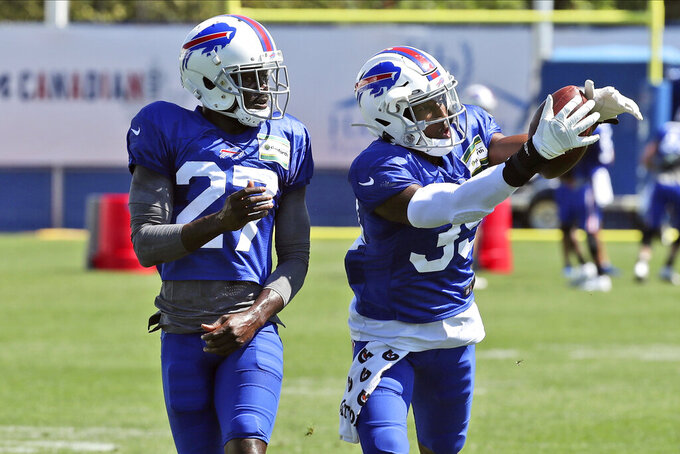 ORCHARD PARK, N.Y. (AP) — Each year, the Buffalo Bills bring in new competition in a bid to challenge cornerback Levi Wallace for the starting job.

And each year, he finds himself back in his familiar spot opposite Tre’Davious White. That's where Wallace is expected to once again line up Sunday when the Bills open their season hosting Pittsburgh.

In having fended off challenges from former first-round pick Kevin Johnson in 2019, followed by veteran Josh Norman a year later, and a collection of youngsters led by Dane Jackson this offseason, Wallace is accustomed to answering questions regarding his role.

“You guys are going to ask the questions you want to ask regardless so it doesn’t really bother me,” Wallace said, referring to reporters. “In this league that just comes with the job. I mean, football’s competing. So, if you don’t want to compete, you shouldn’t be in the league.”

He’s certainly well-versed in competing for everything he’s earned.

A walk-on at Alabama, Wallace landed a scholarship before his junior season and wound up starting 14 games as a senior on the Crimson Tide’s 2018 national championship team. Upon signing with Buffalo as an undrafted rookie free agent, Wallace not only made the roster but landed the starting job midway through his first season following an injury to Phillip Gaines.

Playing alongside more established players in White, and the safety tandem of Micah Hyde and Jordan Poyer, Wallace is part of a stingy, playmaking secondary considered to be Buffalo’s strength.

With the benefit of two-plus years of continuity, the foursome has formed a tight bond of trust in being able to read off each other in any given situation.

At 26, the same age as White, Wallace's 35 starts rank first among the NFL’s undrafted defensive backs going back to 2011, and fifth among all undrafted players over the same span.

White, a starter in Buffalo since the Bills selected him in the first round of the 2017 draft, marvels at what Wallace has had to overcome.

“Each and every year, Levi never ceases to amaze me. He’s super consistent. He’s going to be in the right spot. He’s not going to have any mental busts,” White said, before reflecting on Wallace’s journey to the NFL.

“I respect him so much more because he’s a a guy that walked on at Alabama,” he added. “To start and then go in undrafted, what are the chances of him making the squad and being a starter for four years. I tell him all the time that I respect his grind.”

Wallace faces the added challenge of having opposing quarterbacks prefer attacking his side of the field in comparison to whomever White is covering.

He has four career interceptions, including two against Pittsburgh. Wallace intercepted Steelers backup Devlin Hodges in the end zone in the final seconds to seal a 17-10 playoff-clinching win for Buffalo in 2019. A year later, he picked off Ben Roethlisberger to end the Steelers' final drive of Buffalo’s 26-15 victory.

Wallace isn’t interested in discussing the past while noting the Steelers are expected to unveil a different offense under new coordinator Matt Canada.

“I’m always trying to prove myself to myself, not to anyone else,” Wallace said of his motivation. “I want to be the best. I want to be better than T-White, to be honest.”

His confidence has grown since first arriving in Buffalo and recalling feeling immediately intimidated by the mere presence of Poyer and Hyde.

“I didn’t know what to expect,” Wallace recalled. “I come in seeing their pictures all over the place and I was like, `Man, these guys are bullies.′ Like: `They’re not even going to like me.’”

So much for first impressions.

Wallace now refers to them as brothers.

“We pick on each other and laugh and joke and cry and share each other’s pain,” he said.

“They’re some of the best men that I know on this planet,” Wallace added, before being unable to resist getting in one jab. “But it also doesn’t change the fact that they can’t beat me in basketball.”