Without Watson and Watt, little hope for Texans to improve 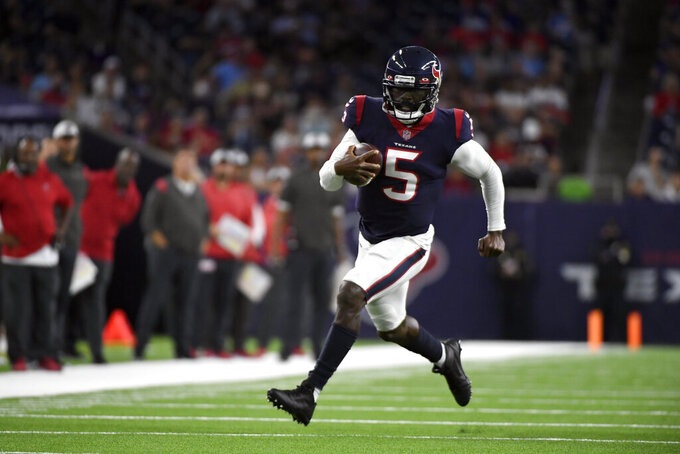 Houston Texans quarterback Tyrod Taylor (5) runs for a first down against the Tampa Bay Buccaneers during the first half of an NFL preseason football game Saturday, Aug. 28, 2021, in Houston. (AP Photo/Justin Rex)

HOUSTON (AP) — Last season was a terrible one for the Houston Texans as they started 0-4 to cost coach Bill O’Brien his job and finished 4-12 after winning the AFC South the previous two seasons.

This season could be even worse in David Culley’s first year as a head coach.

There is little reason for optimism with stars J.J. Watt and Will Fuller gone to other teams and Deshaun Watson not expected to play after he requested a trade before 22 women filed lawsuits alleging sexual assault or harassment against the quarterback.

That leaves Tyrod Taylor as the team’s quarterback, giving him another shot to start after he lost his job last season following a medical mishap. He spent two years with the Chargers, backing up Philip Rivers in his first year before moving into the starting role last season. He only started one game before being sidelined when a team doctor accidentally punctured his lung when giving a painkilling injection for a rib injury. By the time he recovered he had lost his starting job to Justin Herbert, who became the Offensive Rookie of the Year.

“Last year didn’t go the way that I would want it to, but those things are out of my control,” Taylor said. “It’s an opportunity for me to be able to rebound and still play at a high level, which I know I can do. I’m excited to play with the talent that we have on the offensive side of the ball.”

Offensive coordinator Tim Kelly, one of a handful coaches returning from last year’s staff, has been impressed with Taylor’s demeanor so far.

“He is even-keeled throughout the entire game,” Kelly said. “Throughout highs, lows, it doesn’t matter, he’s going to be the same guy, and that’s a great thing because he’s never going to lose control in terms of being too emotional or getting too high or getting too low. He’s very steady.”

The Texans made improving their running game a priority this offseason after ranking 31st in the NFL by averaging just 91.6 yards rushing a game. They return David Johnson, who is looking to bounce back in his second season in Houston after a subpar 2020 campaign. He’s joined by new additions Phillip Lindsay, Mark Ingram and Rex Burkhead, giving the Texans plenty of options in the backfield.

Culley believes their depth at the position will be beneficial as the Texans try to establish themselves as a power running team. As for who will get the most carries, Culley expects to use a committee approach to the position.

“We feel like we’re very versatile back there and we can do what we need to do during the game depending on what they allow us to do,” he said. “We’re not afraid to have any of those guys in at any time in the ballgame.”

Lovie Smith joined the Texans as defensive coordinator after spending the last five years as the coach at Illinois. Smith is intent on increasing the number of turnovers the Texans force after they were last in the league with nine in 2020. They did a good job in that area in the preseason when they finished with 10.

“It’s something that has to be done, to me, if you say that you’re playing good defense,” Smith said. “You just can’t play even and rely on punts and things like that. So, yes, that’s an emphasis that we put every day we’re coming out here... and that’s something we need to be able to do throughout the season.”

Defensive lineman Jordan Jenkins said Smith talks about takeaways more than any coach he’s ever had.

“When you think of the Texans' defense, he wants turnovers to be the first thing that people think about,” Jenkins said.

Fuller signed with Miami this offseason after spending his first five seasons with the Texans, leaving Brandin Cooks as the team’s top receiver. Cooks performed well in his first season in Houston and led the team 1,150 yards receiving. He did well as Watson’s go-to receiver in the five games when Fuller was suspended for using performance enhancers.

Houston added Anthony Miller in a trade with the Bears and he should help make up for the loss of Fuller. But he might not be ready for the opener after dislocating his right shoulder in the first preseason game.

The Texans jump right into division play, hosting No. 1 overall draft pick Trevor Lawrence and the Jacksonville Jaguars in their opener Sept. 12 before traveling to Cleveland on Sept. 19.

Their matchup in Week 7 will feature a visit to the Cardinals, where Watt and former Houston star receiver DeAndre Hopkins both play.