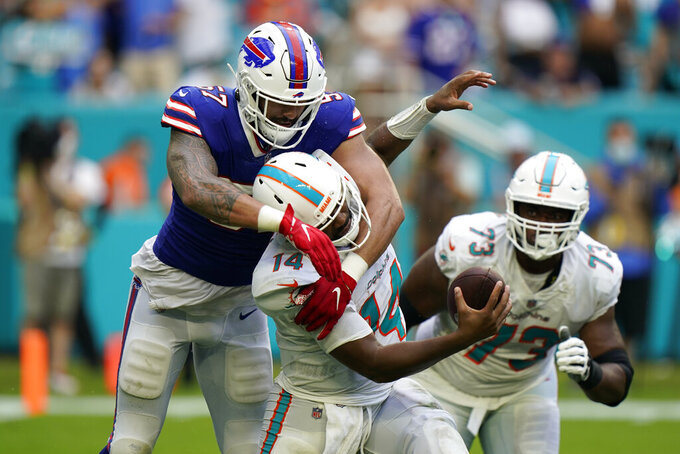 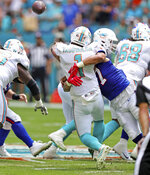 After a disjointed 2020 rookie season, Bills coach Sean McDermott is still getting to know A.J. Epenesa away from the field.

“He is quiet. I don’t think I really know the real A.J., maybe,” McDermott said.

Opposing quarterbacks are quickly learning what Epenesa can do on the field, where the young pass rusher appears to be making up for lost time. The second-year pro has been a vital and integral part of the Bills’ resurgent pass rush, showcasing the skills that made him a second-round pick in 2020.

“I can tell you it’s been fun to watch him play,” McDermott said.

Epenesa’s progress has been significant following what was essentially a lost rookie season. Epenesa had two quarterback hits and helped the Bills finish with six sacks in Sunday’s 35-0 win over the Miami Dolphins.

Epenesa sent Dolphins quarterback Tua Tagovailoa out of the game on a clean, but impactful hit five minutes into the first quarter.

“That man was a beast out there on Sunday,” safety Jordan Poyer said. “Hopefully he keeps it going.”

It’s night and day compared to Epenesa’s rookie season, when Epenesa never got out of the blocks. In an effort to transition from Iowa’s gap-heavy scheme to Buffalo’s pressure-oriented system, Epenesa looked to slim down. The problem was Epenesa dropped too much weight, going from 280 pounds to as low as 245 pounds. That led to immediate concern about his ability to match up against bigger, stronger offensive linemen.

Epenesa’s rapid weight loss combined with no offseason practices because of the coronavirus pandemic put Epenesa immediately behind others.

He took a different approach this offseason. Epenesa worked on gaining muscle in order to get his explosion and fast-twitch movements back, settling in around 255 to 260 pounds. And there were no doubts about his dedication, as he made the unusual move to stay in Buffalo the entire offseason to take full advantage of the team’s facilities.

That turned out to be a pivotal decision in his young career.

“That was a personal choice that he made to be here, even though based on the calendar and the rules he didn’t have to be here,” McDermott said. “So I credit him for that. You see when a player invests that way in his career, that usually pays off. That’s a great message to the young players that continue to come in behind A.J. I’ve just seen a renewed commitment to the process and maybe a better understanding of what it takes to play at this level.”

Epenesa said it was the little things he picked up during that time which proved to be critical.

“Coming in and getting into that routine, getting in the weight room, getting in the training room, getting my body feeling right,” Epenesa said. “And then just even after working out and after the lifts, Harrison Phillips was up here, and Efe Obada. And we’re going through plays, we’re going through different footwork on the turf inside the weight room. It’s nothing crazy, nothing big, but it’s just dialing in on our fundamentals, dialing in on our technique. We’re only walking through it, so stuff like that also (makes) going through it at full speed that much easier because you’ve done it 1,000 times walking and it just makes everything else that much easier when you do it again.”

Epenesa isn’t the only player blossoming along Buffalo’s defensive line. First-round pick Greg Rousseau had his first two career sacks against Miami. Veterans Jerry Hughes and Mario Addison have led the way and the overall unit has been much improved compared to one year ago.

“It just shows our D-line can get after it,” Epenesa said. “It shows that all that hard work we’ve been doing is paying off.”

Epenesa’s hard work in particular is paying off for the Bills.

“Seeing what he did and what he’s done through training camp and now through the preseason and then the regular season is exactly what we’re hoping for,” defensive coordinator Leslie Frazier said. “And there’s a lot more good to come.”