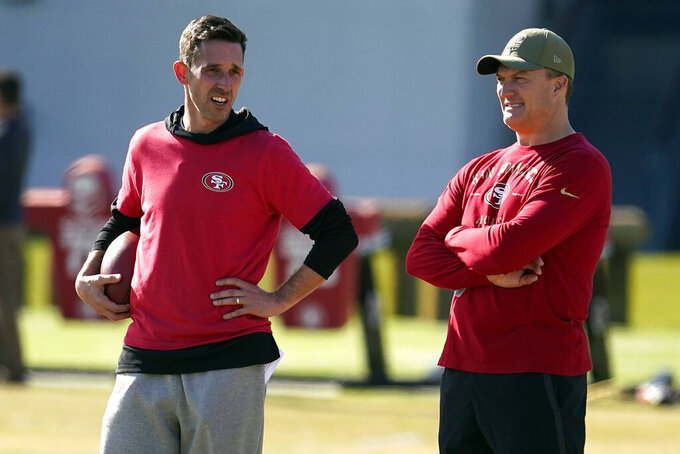 The San Francisco 49ers got training camp started by agreeing to a one-year contract with a free agent tight end and meeting face-to-face with their own star at the position.

The 30-year-old Reed had 329 catches for 3,371 yards and 24 TDs in 65 career games for Washington but has ended up on the injured reserve list in four of his seven seasons. He missed all of 2019 after suffering his seventh documented concussion in the preseason.

“It’s well-documented he’s had multiple concussions prior,” general manager John Lynch said. “There’s a reason a guy like Jordan Reed’s out there, right? So, there is some risk-reward. We got to a point where we felt the risk that we’re taking on was worth it with the potential reward.”

Reed’s best season came in 2015 when he had 87 catches for 952 yards and 11 touchdowns for Washington. He has played only 31 games the past four seasons because of a variety of injuries.

Reed was drafted in 2013 when Niners coach Kyle Shanahan was offensive coordinator in Washington and has experience playing in San Francisco’s offense.

“I think everyone’s aware of Jordan’s ability,” Shanahan said. “When he’s been healthy, he’s played at an extremely high level and he’s been one of the best third-down tight ends in the league. I was able to spend a year with him, so I’m familiar with the person and the player.”

Shanahan was looking to add another receiving tight end to the group all offseason. San Francisco drafted blocking tight end Charlie Woerner in the sixth round in April and also has former undrafted free agent Ross Dwelley as a backup.

“I know he’s hungry to get come in and play football,” Shanahan said about Reed. “When you have a talented guy who is hungry to play football, it works out if they can stay healthy. Jordan’s had some bad luck over the years. I know he’s ready to go. I hope he has some good luck here. If he does, I think it’s going to be a hell of a deal for the Niners and a really good deal for him also.”

The 49ers are also looking to reach a long-term deal with Kittle, who is entering the final year of a rookie contract he signed as a fifth-rounder in 2017.

Kittle has developed into perhaps the most well-rounded tight end in the game, excelling as both a blocker in the run game and a receiving threat.

He has 173 catches for 2,430 yards the past two seasons and was a key reason for San Francisco’s offensive success in 2019 when the Niners made it to the Super Bowl.

Shanahan and Lynch got to meet in person with Kittle for the first time this offseason after the coronavirus pandemic wiped out the offseason program.

Lynch said he’s “working diligently” to get a deal done and Shanahan said he’s optimistic a deal will get done.

“We’ve tried to be respectful of the agent-player thing, but it’s always nice just to talk with the player,” Lynch said. "I think there’s a great understanding that, we’re in this thing together. We’re partners to try to get something done because it makes too much sense not to.”

The 49ers also announced that receiver Richie James Jr. was moved from the reserve/COVID-19 list to the non-football injury list with a broken wrist suffered in offseason workouts.

Defensive backs D.J. Reed was placed on the season-ending non-football injury list after tearing his pectoral muscle in the offseason.