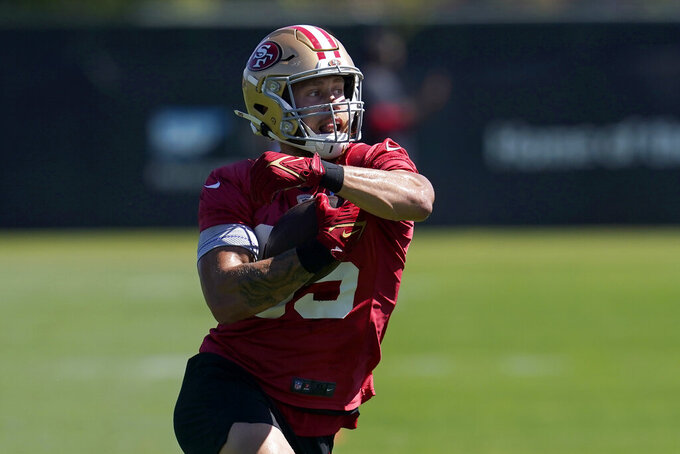 Kittle injured the groin in a light practice on Monday and has not been able to get back on the field for the first two major practices ahead of Sunday's opener at Chicago.

Coach Kyle Shanahan has characterized the injury as day to day.

The loss of Kittle would be significant for the Niners in their first game since handing the team over to second-year quarterback Trey Lance.

Kittle is one of San Francisco's top pass catchers and is a key part of their running game as one the better blocking tight ends in the league.

Kittle still managed 71 catches for 910 yards and six touchdowns in 14 games last season. His 335 catches since entering the league in 2017 rank third among all tight ends in that span and he is second with 4,489 yards receiving.

If Kittle is unable to go, the Niners have Charlie Woerner, Ross Dwelley and Tyler Kroft as options on the active roster and Troy Fumagalli on the practice squad.

Kroft is the most experienced of that group with 48 career starts for Cincinnati, Buffalo and the New York Jets. He has 101 career catches for 1,024 yards and 13 TDs in 81 games since entering the league in 2015.

“We’ve been a fan of Kroft his whole career,” Shanahan said Wednesday. “I was a real big fan of him coming out of college. He’s done well everywhere he’s been. He had some injury trouble last year, I think the last couple years he’s struggled to stay out there. I think that’s one of the reasons we were able to get him. But Kroft, he’s an NFL tight end. We feel very fortunate to have him here.”