49ers next team up to try slowing Jackson and Ravens 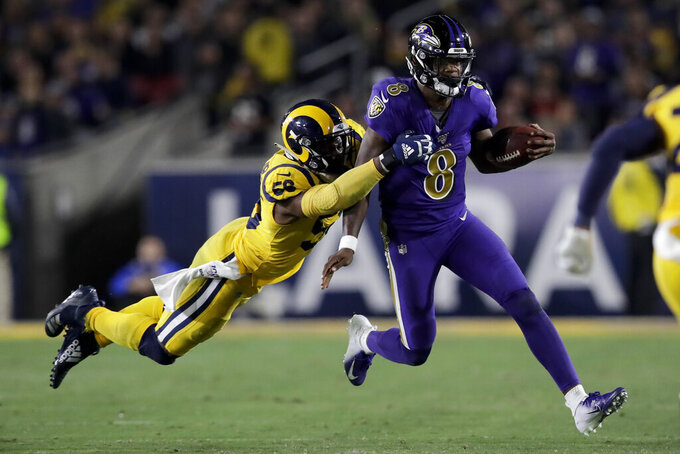 Then again, that’s what some of the so-called experts said about Seattle, New England, Houston and the Los Angeles Rams. All four of those teams reached the playoffs last year, and each one of them lost by at least two touchdowns to the Ravens (9-2) during their current seven-game winning streak.

Now it’s the 49ers’ turn to see if they’ve got what it takes to match up with the multi-faceted Jackson, the league’s top-ranked rushing attack and a team averaging 35.1 points per game.

“They do some real cool stuff, stuff that’s real interesting,” San Francisco coach Kyle Shanahan said. “I enjoy looking at how impressive it is in the scheme, but it’s not going to be that fun thinking of how to stop it.”

The 49ers (10-1) will bring the NFL’s top-ranked defense into Sunday, a rematch of Super Bowl 47 and potentially a preview of Super Bowl 54.

Though it might be premature to make that kind of assessment, no one would be surprised if these two first-place teams meet again in February.

It’s tough to come up with enough adjectives to describe the Ravens offense, and Baltimore wide receiver Willie Snead had a similar problem listing the qualities of a San Francisco defense that last week humbled Green Bay star quarterback Aaron Rodgers in a 37-8 rout.

“Fast, aggressive, physical. I mean, their front seven is pretty stout,” Snead said. “They come in here with a swagger like they expect to win. It’s going to be a huge challenge for us. We respect the heck out of them because they’re 10-1 and deserve it.”

San Francisco leads the NFL with 44 sacks, getting at least three in eight straight games for the longest streak since Seattle had nine in a row in 2005.

It’s not as if the opposition can key on one rusher. Arik Armstead leads the team with 10 sacks, but he's getting plenty of help from rookie Nick Bosa with eight sacks, Dee Ford with 6 ½, and DeForest Buckner with five. Even linebacker Fred Warner has gotten into the mix, getting his first three career sacks over the past three games.

San Francisco did a good job of keeping Rodgers in the pocket last week, which will be even more important against Jackson.

"You want guys to rush the quarterback like their hair's on fire and go crazy, but it's got to be somewhat of a controlled chaos,” Shanahan said.

The Ravens placed Matt Skura (knee) on injured reserve this week after he was carted off the field with a knee injury in the first quarter of Monday night’s 45-6 rout of the Rams.

Rookie free agent Patrick Mekari took over, did a fine job and will get his first NFL start against a very formidable San Francisco defensive front.

“There’s definitely pressure with it, but I’m confident and I feel good about the position I’m in,” Mekari said. “My biggest goal is, I don’t want there to be a drop-off.”

The Niners got a big boost offensively last week with the return of tight end George Kittle.

Kittle broke a bone in his ankle on the first play against Arizona on Oct. 31 and tried to play through that game. He then missed the next two weeks.

"You can't replace a player like George Kittle," tackle Mike McGlinchey said. "I think he's one of the best, if not the best player in the league."

Jackson leads the NFL with 7.1 yards per carry, ranks 10th with 876 yards rushing and is only 163 yards short of tying Michael Vick’s single-season record for yards rushing by a quarterback.

He can throw, too. Jackson is tied for the NFL lead with 24 TD passes, has had a perfect quarterback rating in two games, and last week torched the Rams for five touchdowns with no interceptions.

For the second time this season, the 49ers will spend 10 days on the road with back-to-back games in the eastern half of the country.

San Francisco will travel to Florida after Sunday’s game to spend the week there before heading to New Orleans to take on the Saints.

That approach worked earlier in the season when the Niners went to Ohio following a season-opening win at Tampa Bay and then beat Cincinnati 41-17.