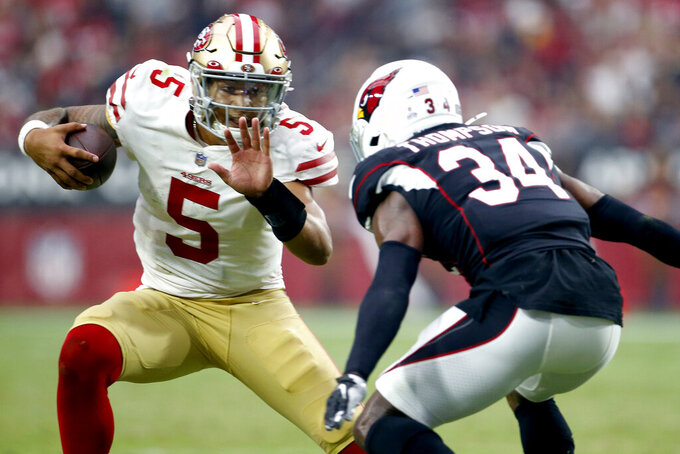 SANTA CLARA, Calif. (AP) — The San Francisco 49ers are optimistic starting quarterback Jimmy Garoppolo can return this week from a right calf injury but don't expect backup Trey Lance back for another week.

Coach Kyle Shanahan said Garoppolo would be limited at practice Wednesday after missing one game with the injury and is on target to play Sunday night against Indianapolis.

“It’ll be good to go out there and go full go today. I know he’s limited because we’ve got to make sure he can do everything," Shanahan said. “We’ll have a much better idea today, but I’m pretty optimistic about it.”

Lance sprained his left knee when he started in place of Garoppolo on Oct. 10 at Arizona and hadn't healed enough during the bye week to practice Wednesday.

Garoppolo got hurt early in the game Oct. 3 against Seattle and left at halftime. He missed one game but took advantage of the bye week to get back without missing any more time.

Garoppolo said the calf “feels great” now and he is able to push off his plant leg once again.

“I didn’t want to push too much last week. But I think during the bye week, we’ve really made some big strides,” he said. “So I’m happy with where it’s at.”

Lance’s recovery is progressing as expected but he isn’t quite ready to return to practice. Shanahan said Lance has been told to stay off his feet as much as he can but was expected to do some light throwing Wednesday.

“We were hoping he could go this week. It doesn’t look like it,” Shanahan said. “He might have a chance at the end of the week. I’d be surprised if he’s not ready to go next week.”

The Niners return from the bye on a three-game losing streak as the defense has struggled to generate takeaways and the offense has not been clicking like Shanahan hoped it would.

San Francisco has been hurt by a season-ending knee injury to running back Raheem Mostert and a calf injury that will sideline tight George Kittle for at least three games. But there are still other problems not related to injuries.

“I think we’ve got to be much better in situational football,” Shanahan said. "We’ve got to be much better throwing and catching. I’d like to generate a few more explosive runs. I think we're running the ball somewhat decent but if you don’t get big runs, you’re never going to have those numbers. Then it just comes down to execution in some real critical situations."

NOTES: CB K'Waun Williams was back at practice after missing two games with a calf injury and is expected to play this week. ... DT Javon Kinlaw (knee) and LT Trent Williams (elbow, ankle) also missed practice.