Ammendola out, Kessman in as Jets make change at kicker 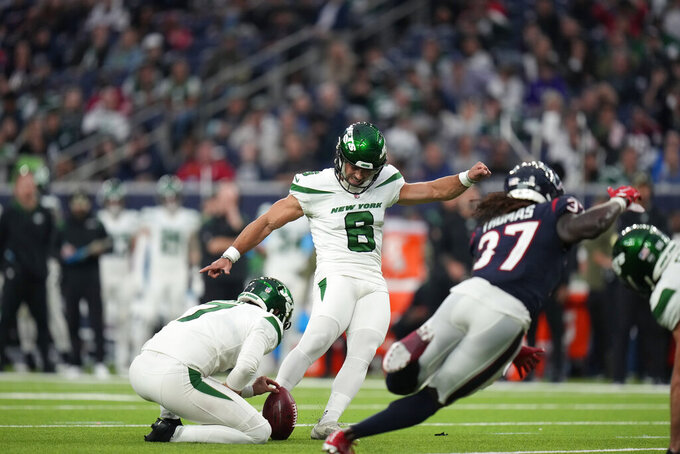 New York Jets kicker Matt Ammendola (6) kicks a field goal in the second half of an NFL football game against the Houston Texans in Houston, Sunday, Nov. 28, 2021. The Jets won 21-14. (AP Photo/Eric Smith)

Ammendola was just 13 of 19 on field goal attempts this season, and he missed three of his last six attempts.

“Sometimes you can get a little bit out of whack with your technique, so to speak, but he’s an ultra-talented kid,” special teams coordinator Brant Boyer said Friday. “He’s just got to convert when we need the points, right?"

Despite a strong leg that impressed during training camp, the first-year kicker from Oklahoma State was 2 for 8 on attempts 40 yards or longer — including 0 for 3 on kicks of 50 or more yards.

That prompted the Jets to sign Kessman, also a rookie, to the practice squad last week. While the job remained Ammendola's at Houston, he went 2 for 3 including a miss from 42 yards in the fourth quarter of New York's 21-14 win. Coach Robert Saleh announced this week the job would be up for grabs, saying, “We'll get those two guys up working and may the best man win.”

Apparently, that was Kessman, who previously spent time with the Los Angeles Chargers after being signed as an undrafted free agent in May.

Kessman will get his first NFL regular-season game action Sunday when the Jets host the Philadelphia Eagles.

“He’s done a nice job,” Boyer said. “He’s got real solid leg talent and he does have some nice kickoffs. And he’s been accurate so far, and we liked him in the draft process coming out.”

New York also elevated three players from the practice squad: running back Austin Walter, who scored his first NFL touchdown last week; defensive end Ronnie Blair, who had his first sack with the Jets last week; and tight end Dan Brown, who was re-signed to the practice squad Tuesday after being traded to Kansas City last month for offensive lineman Laurent Duvernay-Tardif.