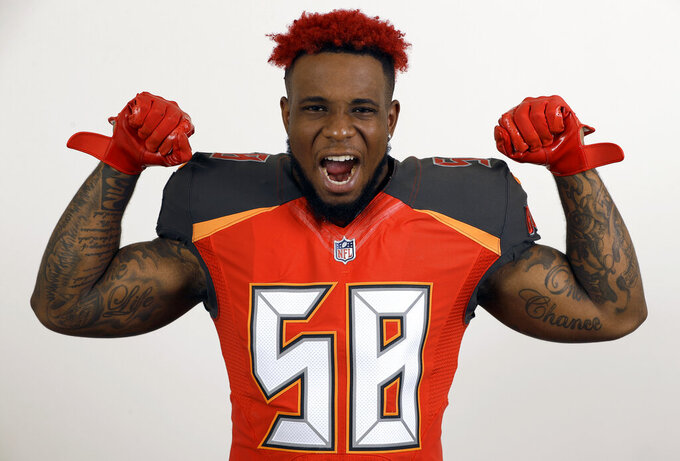 FILE - This is a June 6, 2018, file photo showing Tampa Bay Buccaneers outside linebacker Kwon Alexander during a studio photo session at the team training facility, in Tampa, Fla. The San Francisco 49ers have agreed to sign linebacker Kwon Alexander to a four-year contract worth $54 million. A person familiar with the contract said the sides came to an agreement Monday, March 11, 2019, soon after teams were allowed to contact pending unrestricted free agents. The person spoke on condition of anonymity because the deal can't be finalized until the new league year starts Wednesday. (AP Photo/Chris O'Meara, File) 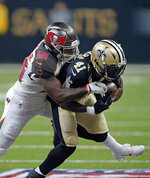 The two sides reached a deal quickly after teams were allowed to contact pending unrestricted free agents, a person familiar with the contract said. The person spoke on condition of anonymity because the deal can't be finalized until the new league year starts Wednesday.

Alexander entered the league as a fourth-round pick by Tampa Bay in 2015 and made the Pro Bowl his third season as a replacement for an injured player. But he tore the ACL in his left knee last October and played just six games. That didn't stop San Francisco from rewarding him with the richest deal ever for an inside linebacker to pair him with 2018 third-round pick Fred Warner.

The 49ers paid a steep price at linebacker just two years after using a first-round pick on Reuben Foster. Foster had a series of off-field problems and was released last November after being accused of domestic violence against a woman at the team hotel the night before playing Tampa Bay.

Prosecutors ultimately decided not to pursue charges but the 49ers had already cut ties with Foster, who also was accused last offseason of domestic violence before that case was dropped when a judge ruled there wasn't enough evidence after the accuser recanted her allegations.

Alexander will be added to a defense that set an NFL record for futility with just seven takeaways, including a record-low two interceptions. As an inside linebacker, Alexander is not known as a playmaker but he does have six career interceptions, six forced fumbles, two fumble recoveries and seven sacks in 46 games.

Alexander's most productive season came in 2016 when he led the NFL with 108 solo tackles and also had 12 tackles for loss. He has averaged 8.3 total tackles per game in his career, the sixth most in the league since 2015 among players with at least 25 games played. But Alexander also led the NFL with 67 missed tackles from 2015-17, according to SportRadar.

Alexander has missed 14 games with injuries the past two seasons and also was suspended for four games as a rookie for violating the NFL's policy on performance-enhancing substances.