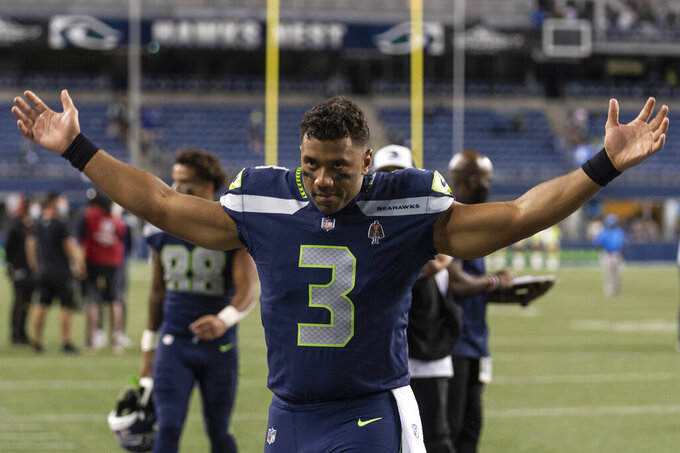 FILE - Seattle Seahawks quarterback Russell Wilson gestures as he walks off the field after an NFL preseason football game against the Los Angeles Chargers, Saturday, Aug. 28, 2021, in Seattle. The Seahawks won 27-0. The Seattle Seahawks have agreed to trade nine-time Pro Bowl quarterback Russell Wilson to the Denver Broncos for a massive haul of draft picks and players, two people familiar with the negotiations confirmed to The Associated Press on Tuesday, March 8, 2022. The people spoke on condition of anonymity because the blockbuster trade, which is pending Wilson passing a physical, can't become official until the start of the new league year on March 16. (AP Photo/Stephen Brashear, File)

Six years and a day after Manning retired, Broncos general manager George Paton agreed to send a massive haul of players and draft picks to the Seattle Seahawks for nine-time Pro Bowl quarterback Russell Wilson, two people familiar with the negotiations confirmed to The Associated Press on Tuesday.

The people spoke on condition of anonymity because the blockbuster trade, which is pending Wilson passing a physical, can't become official until the start of the new league year on March 16.

The teams cannot comment on the deal until then, but the Broncos cleverly tweeted a clip of Tom Hanks' character in “Cast Away” drawing a face on the volleyball he named “Wilson.”

About an hour later, the Seahawks tweeted another clip from that movie in which Hanks' scraggly, skinny character loses the volleyball at sea and hollers, " Wilson, where are you? Wilson! Wilson! ”

Denver was seen as the front-runner for Aaron Rodgers before the two-time reigning MVP agreed Tuesday to stay in Green Bay, presumably as the highest-paid player in NFL history. Not long afterward, Paton landed a Super Bowl-winning quarterback anyway, and one who's five years younger than the 38-year-old Packers star.

The NFL Network reported the Seahawks agreed to send Wilson and a fourth-round pick to Denver in exchange for two first-round picks, two second-round picks, and a fifth-rounder, along with quarterback Drew Lock, defensive end Shelby Harris and tight end Noah Fant, the Broncos' first-round draft pick in 2019.

Since Manning retired a month after winning Super Bowl 50, the Broncos have churned through 10 starting quarterbacks, including a different starter in each of the last five season openers: Trevor Siemian, Case Keenum, Joe Flacco, Lock and Teddy Bridgewater, who beat out Lock last summer.

The Broncos haven't been back to the playoffs since Manning retired, but they appear to have a playoff-worthy roster. New coach Nathaniel Hackett, Rodgers' former offensive coordinator, is building an offense around dynamic wide receivers Jerry Jeudy, Courtland Sutton, Tim Patrick and K.J. Hamler, tight end Albert Okwuegbunam and running back Javonte Williams.

And now he has the quarterback to make it all work, one who can stack up with the likes of Patrick Mahomes, Justin Herbert and Derek Carr in the tough AFC West.

Jeudy tweeted a frowning emoji upon word of Rodgers staying put, then he tweeted a smiling emoji when word broke that Wilson was headed to Denver.

The Seahawks had made it clear they weren't interested in moving Wilson unless a transformational offer came along.

Seattle’s offseason had mostly been focused on adjustments on defense with coaching and scheme changes, and the belief that with Wilson still at quarterback the Seahawks would remain contenders in the stacked NFC West.

Last week at the NFL scouting combine in Indianapolis, coach Pete Carroll said that general manager John Schneider was receiving calls about Wilson’s availability but the Seahawks weren’t shopping him.

The trade, though, was the culmination of more than a year's worth of buildup. Wilson first expressed his discontent with the franchise last offseason after Seattle won the division but lost in the first round of the playoffs.

The acrimony got to the point that his agent publicly expressed the teams Wilson would be willing to accept a trade to, but the quarterback and the Seahawks moved forward together for one more season.

This was always the offseason that seemed to make the most sense for a potential move with Wilson, however. He has two years remaining on his current contract and a salary cap hit of $37 million for the 2022 season.

Wilson was a third-round pick in 2012 out of Wisconsin. He won the starting job as a rookie after Seattle had signed Matt Flynn in free agency. The decision to go with Wilson was one of the smartest ever made by Carroll.

Wilson started 149 regular-season games and 16 playoff games before suffering a fractured middle finger on his right hand and missing four games last season, when he went 6-8. Seattle finished 7-10, the only losing season in Wilson’s tenure.

He struggled upon his return but finished strong, showing it was more of an injury-marred stretch than an indication he was in any sort of decline.

Wilson helped Seattle to its only Super Bowl title with a 43-8 thumping of Manning and the Broncos in Super Bowl 48, then lost to Tom Brady and the Patriots in the Super Bowl a year later. Overall, he’s 9-7 in the playoffs.

Lock is 8-13 with 25 touchdown passes and 20 interceptions over three seasons in Denver.

Unless the Seahawks package their newly acquired picks and try to land, say, Deshaun Watson from the Texans should he clear up his legal issues, it appears a larger rebuild may be in play for Seattle.

The Seahawks have major free agent questions with left tackle Duane Brown, safety Quandre Diggs, cornerback D.J. Reed and running back Rashaad Penny. There also have been questions about 31-year-old linebacker Bobby Wagner’s future in Seattle with the Seahawks facing a $20 million cap hit under his current contract.

And now they need a starting quarterback.