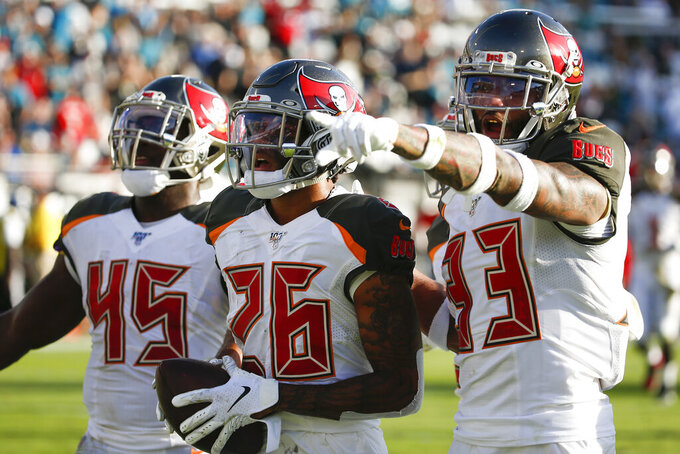 Tampa Bay Buccaneers defensive back Sean Murphy-Bunting (26) celebrates his interception against the Jacksonville Jaguars with linebacker Devin White (45) and cornerback Carlton Davis (33) during the second half of an NFL football game, Sunday, Dec. 1, 2019, in Jacksonville, Fla. (AP Photo/Stephen B. Morton)

TAMPA, Fla. (AP) — The Tampa Bay Buccaneers are showing signs of improvement with double-digit wins in three of their last four games, even though the success has come against last-place teams.

“We all knew that we were capable of this,” tight end O.J. Howard said a 28-11 victory over the Jacksonville Jaguars lifted the Bucs (5-7) into second place in the NFC South, albeit with a losing record. “We’re finally just all happy to be able to put it together.”

With five victories, the team already has matched its win total from each of the past two seasons. The teams they’ve beaten the past month — Arizona (3-8-1), Atlanta (3-9) and Jacksonville (4-8) — may sit at the bottom of their divisions, but there’s plenty for first-year coach Bruce Arians to be encouraged about moving forward.

In addition to an offense that ranks among the league leaders in passing, total yards and points scored, a young Bucs defense that starts up to four rookies and a trio of second-year pros is growing and maturing by the week.

The team, which has 11 sacks and forced six turnovers the past two weeks, has won consecutive games under Arians for the first time.

“I like where we are at,” the coach said. “We are practicing and preparing extremely hard each week. We are coming into stadiums expecting to win.”

With help from White’s first pro touchdown, the Bucs matched their season average with 28 points against Jacksonville. Even more impressive, they found a way to win without Winston throwing a TD pass and without either of the team’s top receivers, Mike Evans and Chris Godwin, having big games. Receiver Breshad Perriman and tight end O.J. Howard took up the slack, with Perriman making five catches for a career-best 87 yards, and Howard gaining 61 yards on a season-high five receptions. The Bucs improved to 4-7 in games in which Winston has failed to throw for a touchdown.

Although Peyton Barber scored on runs of 15 and 1 yards, the Bucs were nowhere near as effective running the ball as one might suspect. They led 25-0 at halftime, Winston attempted just eight passes in the second half, and Jacksonville had yielded more than 200 yards on the ground in each of the Jaguars’ previous three games. Tampa Bay finished with 74 yards rushing on 31 attempts, an average of 2.4 yards per carry. Barber carried 17 times for 44 yards (2.6 yards per attempt) and Winston was the team’s second-leading rusher with 20 yards on six attempts.

In addition to scoring on a 14-yard fumble return, White also had his first career interception, two passes defensed, a quarterback hit and seven tackles. The fifth overall pick in this year’s draft, whose progress was slowed early in the season by a knee injury that sidelined him three games, had two sacks the previous week against Atlanta.

“You can really see him blossoming each week and getting more and more confident,” Arians said.

Starting running back Ronald Jones II was benched after missing a blitz protection assignment on a play in which Jaguars safety Andrew Wingard sacked Winston, forcing a fumble.

Arians said the mistake could have been much costlier than it wound up being.

“We had the game in hand. It was something that had been switched – the way we were going to block something because of their blitzes – and he went to block the guy he used to block, and that wasn’t the plan,” the coach said. “He works ... and he’s going to get better at it because we need him running the football. But, you can’t run the football if you can’t protect the quarterback.”

16½ — Warren Sapp’s single-season franchise record for sacks is in jeopardy. Shaquil Barrett had two against Jacksonville, giving him a career-best 14½ through 12 games. That’s the fourth-highest single-season total in club history behind Sapp’s 16½ in 2000 and Simeon Rice’s 15½ in 2002 and 15 in 2003.

Bucs will play three or their remaining four games at home, including Sunday against Indianapolis and Dec. 21 vs. Houston, playoff contenders who figure to provide a barometer of how the team has progressed.