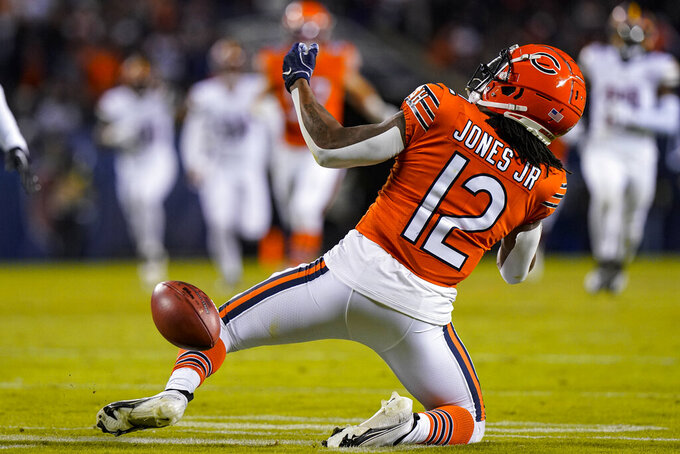 Chicago Bears wide receiver Velus Jones Jr. fumbles a punt in the second half of an NFL football game against the Washington Commanders in Chicago, Thursday, Oct. 13, 2022. The Commanders recovered the ball. (AP Photo/Nam Y. Huh)

The Chicago Bears' quarterback vented following a 12-7 loss to the struggling Washington Commanders, frustrated by missed opportunities and a little banged up to add to his misery.

Fields took a beating, absorbing five sacks and 12 quarterback hits not to mention the blows he took running a whopping 12 times. The left shoulder he hurt earlier in the year started bothering him in the first half.

The Bears have a little extra time to heal and figure out how to get back on track before they visit New England for a Monday night matchup on Oct. 24. Eberflus said they'll be examining the scheme and the rotations. Players were also given a list of three things they're doing well and three areas they need to improve.

The Bears (2-4) have room to improve in all areas. And, of course, all eyes are on Fields.

He threw a terrific 40-yard touchdown to Dante Pettis and scrambled 39 yards to the 5 near the end of the game, putting Chicago in position to pull out the win. Pettis was unable to hang onto a third-down pass in the end zone with Darrick Forrest all over him. A leaping Darnell Mooney got knocked out of bounds by Benjamin St-Juste inches shy of the goal line as he hauled in a pass, sealing the loss.

The Bears also missed big opportunities on consecutive possessions in the first half.

Fields got picked off with Chicago on the Washington 5. He zipped a pass that hit a defensive tackle's helmet helmet and popped into the air, leading to an interception by Jonathan Allen.

Khalil Herbert then broke off a 64-yard run to the 6. But Fields overthrew a wide-open Ryan Griffin in the end zone and Herbert got stopped on fourth down at the 1.

“Everyone is feeling this way,” Fields said. “Everybody’s mad. Nobody is happy about this loss.”

The run game. Though the Bears had trouble finishing drives, they did run for 238 yards — their second-highest total this season. Part of that was Fields, with 88 yards, having to scramble behind a shaky offensive line. But Herbert broke off a big run, and David Montgomery carried 15 times for 67 yards.

Red-zone offense. The Bears were 0 for 3 in the red zone for the second time in three games and rank 24th in the NFL in efficiency at 46.7%. Against the New York Giants three weeks ago, they at least converted field goals on three of those trips. But on Thursday? Chicago became the first team in 23 years to fail to score on at least three goal-to-go drives in a single game. Cincinnati had four such drives in a 22-0 loss to Baltimore on Dec. 26, 1999.

The defense. The Bears continued to have issues against the run, allowing 128 yards rushing. But overall, it wasn't a bad performance. They held Carson Wentz to 99 yards passing and sacked him three times.

PR Velus Jones Jr. The muffed punt was Jones' second in the past three games. And both played big roles in losses. Against the Giants two weeks ago, the rookie muffed one at his own 35. Gary Brightwell recovered with 2:13 to play, and New York hung on to win 20-12. Against Washington, Jones called fair catches on balls he should have run back and muffed one at the end, leading to the go-ahead touchdown. “I was trying to do too much,” he said. “The ball went deep. It would have went in the end zone but I tried to run back and make a play on it and I should have let it roll into the end zone for a touchback.”

G Lucas Patrick (concussion protocol) was hurt blocking on a run early in the third quarter, but quickly returned to the game.

20. The Bears have three straight losses by a combined 20 points.

The Bears need to change their luck when they visit New England on Oct. 24. Chicago is 4-10 against the Patriots, with five straight losses.