Bears try to build momentum against Rams after beating Lions 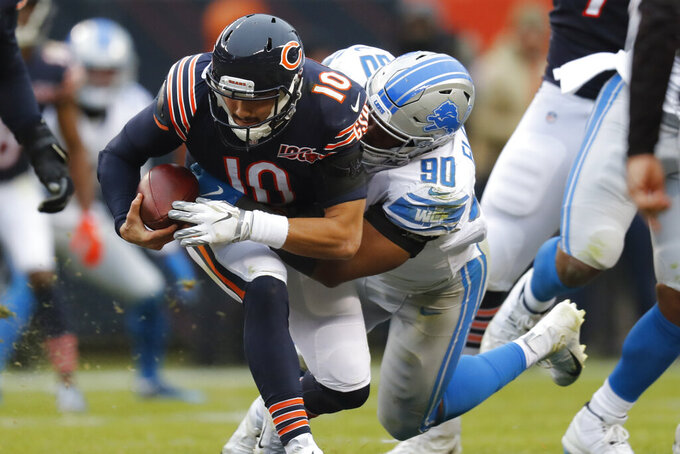 LAKE FOREST, Ill. (AP) — The Chicago Bears took a big step toward the NFC North championship and their first playoff appearance since 2010 when they shut down Jared Goff and the Los Angeles Rams last year at Soldier Field.

This time, they’re simply trying to build some momentum.

The Bears come into the rematch at Los Angeles on Sunday at least breathing a little easier after beating Detroit 20-13 last week to stop a four-game losing streak.

“We’re not exactly where we want to be yet,” quarterback Mitchell Trubisky said Wednesday. “But a win definitely gives you confidence moving forward because at the end of the day, no matter what you did, you came away with the result you wanted. And that’s a win. So we just, we’ve still got find ways to pull together, continue to work harder and get better and try to go 1-0 this week.”

The struggling Trubisky tied a season high with three touchdown passes and the Bears (4-5) got the win they needed. They hung on when Jeff Driskel, filling in for the injured Matthew Stafford, overthrew Marvin Jones Jr. in the end zone as time expired on a play that wouldn’t have counted because he got called for an illegal forward pass.

The Bears went long stretches in that game without moving the ball, though they got touchdowns on three straight possessions in the second and third quarters. They lost another important player on defense when Danny Trevathan suffered what looked like a gruesome elbow injury. And they nearly blew a 14-point lead.

“During the course of the season, there are ups and downs,” receiver Allen Robinson said. “But it does feel good to come out with a win.”

That’s something the Bears hadn’t done since a 16-6 victory over Minnesota at home in Week 4. But as good as it felt to come out on top, their defense took another big hit with Trevathan getting hurt. His left arm got bent awkwardly as he tried to sack Driskel.

The team leader with 50 tackles, Trevathan ran off with his arm dangling by his side and into an uncertain future. He has an expiring contract and could be headed to injured reserve, though Nagy said Wednesday that’s still to be decided. He also said he wasn’t sure if Trevathan will need surgery.

Tight end Trey Burton, who has been limited by a groin injury all season, also hurt his calf in the game against the Lions. And Nagy had no update on him.

“He is a leader on our team, and never steers us in the wrong direction,” running back Tarik Cohen said. “I would say so. DT controls the direction of the team. He never lets us bend or break, and he always brings people together.”

Despite losing Trevathan, the Bears held Detroit to 98 yards rushing on 27 attempts. Lions running backs had just 61 yards on 22 rushes.

With Trevathan down, Nick Kwiatkoski set up a touchdown with his first career interception and had a sack. He also played well filling in for Roquan Smith earlier in the season. But with defensive tackle Akiem Hicks on IR with an elbow injury that will sideline him until at least next month, the Bears are missing two disruptive players in the middle. They’re also down two leaders.

“It’s hard, just because there is so much (energy) between the two,” Nagy said. “Just their personalities in general. They’re both a little bit different, with how they handle their personalities, but they’re very similar on the field, leadership-wise. As we move forward here, we’ll have guys that are always ready and prepared and the coaches will have them the same way.”