Bengals use franchise tag on A.J. Green over his objection 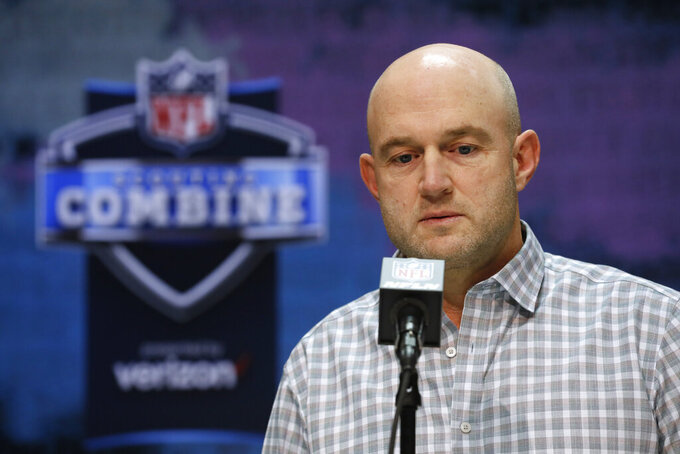 CINCINNATI (AP) — The Bengals used their franchise tag on A.J. Green on Monday, giving them time to try to work out a long-term deal with the seven-time Pro Bowler who is one of the most accomplished receivers in franchise history and would be a vital asset for breaking in a new quarterback.

Green, 31, wants to finish his career in Cincinnati, where he has put down roots. Although he's open to a multi-year extension that would pay him as an elite receiver, he has objected to staying for only one more year on a franchise designation.

Green has said he'll skip voluntary offseason workouts if he's tagged. The Bengals are expected to take Heisman Trophy winner Joe Burrow or another quarterback with the first overall pick in the draft, and having Green in offseason workouts would accelerate a rookie's development.

"The tag is $18 million (in salary) so I'm not running away from that," Green said in December. “But that also shows that they're not committed and in that circumstance I have to protect myself.”

The Bengals can negotiate with Green on a long-term deal through July 15.

Green can talk to other teams but the Bengals have the right to match any offer and keep him. Or, they could let him leave and get two first-round picks as compensation — a prohibitively high price for any team interested in signing him.

For now, it's up to the Bengals to decide how badly they want to keep Green, who has missed most of the past two seasons with injuries.

A first-round pick in 2011, Green teamed with Andy Dalton — a second-round choice that season — to lead the longest streak of playoff appearances in club history. Cincinnati went to the playoffs five straight seasons from 2011-15, losing in the first round each time.

The Bengals haven't won a playoff game since the 1990 season, the fifth-longest streak of futility in the NFL's 100-year history.

Dalton has one year left on his contract and was shunted aside for three games last season as Cincinnati began exploring its long-term quarterback options. Rookie Ryan Finley, a fourth-round pick, started three games, a failed experiment that resulted in three losses and Dalton returning as the starter for the rest of a 2-14 season.

Green was limited to nine games in 2018 because of an injured right toe that required surgery. He was fully recovered last season, but suffered a severe ankle injury when he was hit during a 7-on-7 drill and landed awkwardly during the first practice of training camp.

Even though the ankle eventually healed enough to allow him to practice on a limited basis, he missed the entire season. He's expected to be fully healthy for the start of next season.

Green became the first receiver since the NFL merger in 1970 to be chosen for the Pro Bowl in each of his first seven seasons. He's second to Chad Johnson for most catches and yards receiving in franchise history.

The Bengals repeated Monday that they plan to keep Green for the 2020 season.

“A.J. has been a big part of this team for a long time,” coach Zac Taylor said. “Now that he’s healthy, I am excited to see what he will add to our offense this year.”