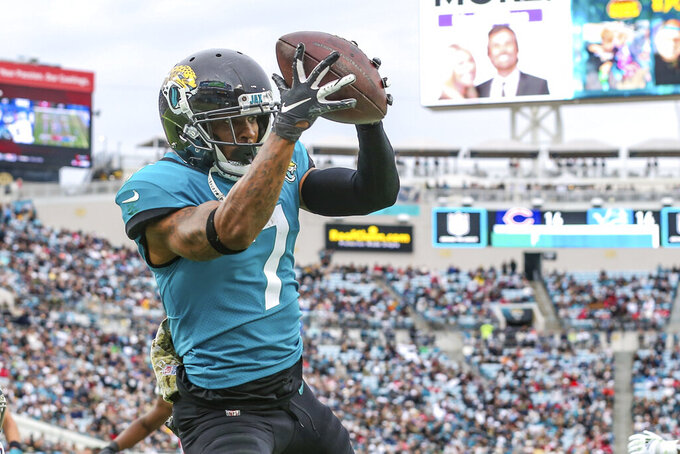 FILE - Jacksonville Jaguars wide receiver Tavon Austin catches a pass in the end zone for a touchdown during the second half of an NFL football game against the Atlanta Falcons, Nov. 28, 2021, in Jacksonville, Fla. The Buffalo Bills signed veteran receiver Austin on Thursday, June 2, 2022, a person with direct knowledge of the deal confirmed to The Associated Press. The person spoke on the condition of anonymity because the signing has not been announced. The move was first reported by NFL.com. (AP Photo/Gary McCullough, File)

The Bills made the signing official by announcing it Friday, a day after Austin first revealed the move by posting a message on social media.

Austin was an unrestricted free agent after appearing in seven games last season with the Jacksonville Jaguars. He had 24 catches for 213 yards and a touchdown. He missed the start of last season because of a groin injury.

He has nine seasons of NFL experience and failed to play up to expectations after being selected with the No. 8 pick in the 2013 draft by the then-St. Louis Rams. Austin was an all-purpose threat as a receiver, runner and returner at West Virginia, and had an Orange Bowl-record four TDs receiving in a 70-33 win over Clemson in 2012.

The Bills become Austin’s fifth team in five years, and he has appeared in just 17 games over the past two seasons.

Austin spent his first five seasons with the Rams, where he had 194 catches for 1,689 yards and 12 TDs. His other stops included a two-year stint in Dallas and splitting the 2020 season between San Francisco, where he failed to play a game because of an injury, and Green Bay, where he appeared in just four games.

The Rams drafted Austin by moving up eight spots in the order as part of a trade with Buffalo, in which the teams exchanged six picks. The Bills used the Rams’ first-round pick to select quarterback EJ Manuel and their second-round pick to choose linebacker Kiko Alonso.

By Dave Campbell 56 minutes ago
By Maryclaire Dale 2 hrs ago
By John Wawrow 3 hrs ago
By W.g. Ramirez 7 hrs ago
By Noah Trister 14 hrs ago