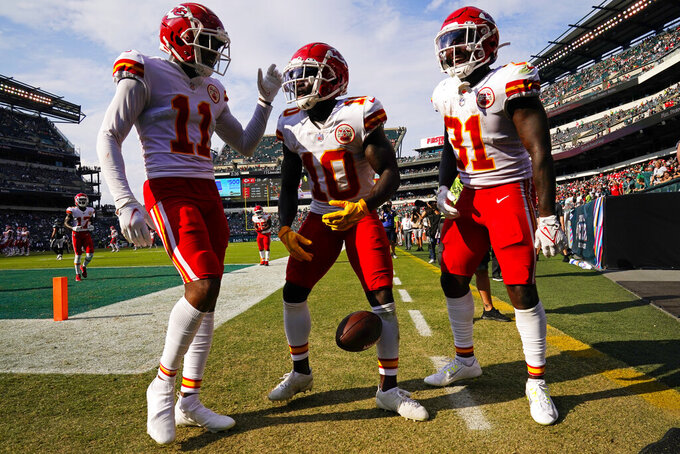 OPENING LINE: Chiefs by 3, according to FanDuel SportsBook.

TURNOVER DIFFERENTIAL: Bills plus-7; Chiefs minus-3.

BILLS PLAYER TO WATCH: QB Josh Allen has been inconsistent after a breakout season in 2020, though he appears to be hitting his stride. Allen is 69 of 105 for 785 yards with eight touchdowns passing, one touchdown rushing and two interceptions over the past three games.

CHIEFS PLAYER TO WATCH: WR Josh Gordon is expected to play for the first time since 2019, when the former All-Pro was with the Seahawks and before his sixth suspension for various violations of NFL policies. He signed with Kansas City after he was reinstated by the league last week and was added to the active roster Tuesday.

KEY MATCHUP: Buffalo's running game has gained traction with a one-two punch of Devin Singletary and Zack Moss topping 100 yards rushing each of the first four games. Now, the Bills get to face the league's third-worst rush defense.

SERIES NOTES: Kansas City has won five of its last six against Buffalo with the only defeat coming on Nov. 26, 2017, at Arrowhead Stadium. ... The teams having been playing since 1960, when the Chiefs were known as the Dallas Texans and both were members of the AFL. ... Buffalo has not scored more than 24 points in a game against Kansas City since a 35-17 win on Sept. 16, 2012.

STATS AND STUFF: Bills coach Sean McDermott worked on Chiefs counterpart Andy Reid's staff in Philadelphia from 1999-2010. He began as a scouting administrator and finished as defensive coordinator. ... Reid became the first coach in NFL history with 100 wins with two franchises with last week's win in Philadelphia. He had 140 with the Eagles and has 100 with the Chiefs. Reid (223) needs four wins to pass Curly Lambeau for fourth in regular-season wins. ... Buffalo leads the NFL with plus-90 point differential. It's the second highest in franchise history through four games. ... The Bills have two shutouts in their first four games, joining Baltimore (2000) and Washington (1991) as the only teams since 1990 to accomplish the feat. Both of those clubs won the Super Bowl that season. ... The Bills allowed 109 yards total offense to Houston last week, the seventh fewest in franchise history and best since 103 in a 19-0 win over Miami on Dec. 22, 2013. ... The Bills have yet to allow 300 yards of offense or 80 yards rushing in a game this season. ... Chiefs QB Patrick Mahomes had his 31st game with a 100 or better passer rating against the Eagles, moving past Len Dawson for the most in Chiefs history. ... Mahomes had five TD passes in Philadelphia to extend the longest active streak in the NFL to 29 games with at least one. ... Mahomes joined Steve Young (1998), Kurt Warner (1999) and Tom Brady (2007) as the only quarterbacks with at least three passing TDs in each of their team's first four games. ... Chiefs WR Tyreek Hill had 11 catches for 186 yards and tied a career high with three TD receptions vs the Eagles. ... Hill has 17 games of at least 100 yards receiving. He needs four more to pass Otis Taylor (20) for third in Chiefs history. ... Travis Kelce and Hill have 51 touchdown receptions apiece, trailing only Tony Gonzalez (76), Taylor (57) and Chris Burford (55) in franchise history. ... Chiefs RB Clyde Edwards-Helaire has at least 100 yards rushing and one TD reception each of the past two games. ... The Chiefs did not punt against the Eagles and have punted once in the last two games.

FANTASY TIP: If you have someone on the Bills' offense, now is the time to start him. Not only are Allen and Co. facing one of the league's worst defenses, they also could be in for a shootout against one of its best offenses. WR Cole Beasley in particular has been brutal on the Chiefs, catching three TD passes in his last two games against them. Beasley had seven catches for 88 yards in last season's AFC title game.