Bills motivated to improve after AFC championship loss to KC 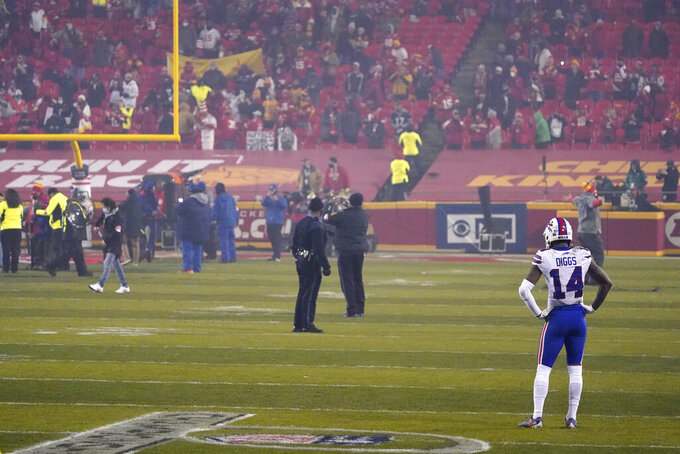 ORCHARD PARK, N.Y. (AP) — Cole Beasley was so committed to being part of what became the Buffalo Bills’ deepest postseason run in 27 years, the veteran slot receiver spent the past three weeks playing on a broken leg.

The partially broken fibula will eventually heal without needing surgery. The pain of a 38-24 loss to the Kansas City Chiefs in the AFC championship game might linger far longer.

“I’d expect everybody to take that feeling in the offseason and do what they feel they need to get us to where we want to go,” Beasley said Monday, a day following the loss. “We’ve got to figure out what we’ve got to do to get better, because they ain’t going anywhere, but we aren’t either. We look forward to the challenge and look forward to another chance.”

Though listed on Buffalo's injury report as having a knee injury, Beasley revealed he broke his leg in the fourth quarter of a 38-9 win at New England in Week 16. After sitting out the Bills’ finale, he was back on the field making seven catches for 57 yards in a 27-24 wild-card playoff victory over Indianapolis.

“There’s no excuses for anything,” said Beasley, who finished the postseason with 14 catches for 145 yards. “It was bad the first game I played, but after that, you take a few meds and suck it up.”

The same can be said of the Bills (15-4), whose visions of their first Super Bowl appearance since 1994 unraveled against the defending champions. In rallying from a 9-0 first-quarter deficit, the Chiefs exposed Buffalo's deficiencies on both sides of the ball.

The Josh Allen-led offense, which set a single-season team record by scoring 501 points, sputtered in settling for field goals rather than touchdowns before the score got out of reach.

The defense was no match against a dynamic Chiefs offense for the second time this season. After allowing a season-high 245 yards rushing in a 26-17 loss to Kansas City in Week 6, Buffalo surrendered 325 yards passing on Sunday, with Tyreek Hill's 172 yards receiving the most allowed by the Bills in the postseason.

The outcome served as a reminder of the gap still separating Buffalo and the NFL’s elite.

“Plain and simple, to get to where we want to be, that’s going to be the team we’re going to have to beat,” cornerback Tre'Davious White said. “That’s the standard there.”

If that’s the case, general manager Brandon Beane has more work on his plate.

Last offseason, following a 22-19 overtime loss to Houston in a wild-card playoff, Beane addressed the need for more offense by acquiring receiver Stefon Diggs in a trade with Minnesota.

This year, he has holes to fill on a defense which took a major step back in finishing 14th in the NFL in yards allowed after ranking in the top three each of the two previous seasons.

As evidenced by both losses to Kansas City, Buffalo experienced difficulties stopping the run and at the same time pressuring quarterbacks without having to blitz.

The troubles stem in part from an offseason in which Buffalo lost defensive linemen Jordan Phillips and Shaq Lawson to free agency, and with top run stuffer Star Lotulelei opting out because of COVID-19 concerns.

Though Lotulelei is under contract and expected to return, free agent Milano’s status is uncertain.

On the bright side, the offense showed substantial growth under Allen, who set numerous single-season passing and scoring records. The third-year player took little satisfaction from a season in which the Bills won their first AFC East title and their first playoff game in 25 years.

“Falling a game short of your goals is never fun,” Allen said.

Allen revealed his entire family has been stricken with COVID-19, with his father recently returning home after spending time in the hospital.

“He’s doing better,” Allen said. “I think all my siblings have had it. Now my parents have had it. Obviously, it’s nothing to joke around with.”

Offensive coordinator Brian Daboll is set to return for a fourth season after losing out on head-coaching vacancies with the Jets and the Chargers. The attention now turns to defensive coordinator Leslie Frazier, a Houston Texans candidate.

“I don’t like the idea at all,” White said of the possibility of Frazier’s departure after four seasons. “I’ll definitely be an endorsee for him to get the job, but hopefully he’ll be back with us next year because he’s definitely a big part of our success.”

By finishing 28 of 48 for 287 yards against the Chiefs, Allen’s 20 incompletions were the most since going 24 of 46 for 264 yards in the playoff loss to Houston last year. ... The Bills led the NFL by converting 93 of 187 third-down chances during the regular season before converting just 11 of 36 in three playoff games. ... The defense allowed opponents to convert 22 of 44 third-down opportunities in the postseason after giving up a combined 38 of 120 over the final 10 regular-season games.