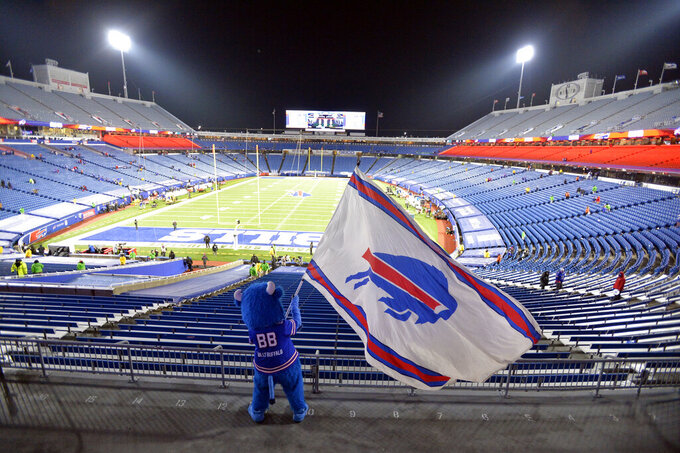 FILE - Buffalo Bills fans leave Bills Stadium as a mascot waves a flag after an NFL divisional round football game against the Baltimore Ravens, Saturday, Jan. 16, 2021, in Orchard Park, N.Y. The Bills won 17-3. Though the Buffalo Bills’ lease on their current stadium doesn’t expire for 21 more months, time is running short on the team reaching a financing agreement with public officials on its proposal to build a new facility.(AP Photo/Adrian Kraus, File)

ORCHARD PARK, N.Y. (AP) — Though the Buffalo Bills’ lease on their current stadium doesn’t expire for 21 more months, time is running short on the team reaching a financing agreement with public officials on its proposal to build a new facility.

“If we get to January and there’s no new deal done, you should really be concerned,” Pegula Sports and Entertainment executive vice president Ron Raccuia told The Associated Press over the weekend. PSE is the Bills’ parent company, with Raccuia overseeing stadium negotiations.

“We’ve pushed this back from our initial timeline to accommodate Gov. Hochul and her getting up to speed,” he added, referring to Kathy Hochul, who took over when Andrew Cuomo resigned in August after an investigation concluded he sexually harassed 11 women. “But we’re all in alignment that we want this deal done by the end of the year.”

What happens beyond that is uncertain.

Bills officials have maintained they are solely focused on reaching an agreement with state and county officials to help finance a proposed $1.4 billion, 60,000-plus seat stadium to be built across the street from their existing 48-year-old facility in Orchard Park. And yet, the threat of the team relocating remains a possibility even though it has not been raised in talks.

The time crunch is becoming an issue as the Bills seek clarity on their long-term future while also saying they have no interest in renewing the lease once it expires at the end of July 2023.

Having a deal in place by January would allow Hochul to include stadium funding in her budget proposal for approval in April. With Hochul up for election next fall, it’s unlikely she will have time for negotiations while campaigning.

The Bills, meanwhile, are concerned they might have go back to square one in negotiations should there be another change in governor.

Hochul, who is from Buffalo, is well aware of the time constraints, saying last week it is her intention to have a deal in place in time for the budget.

“The timeline is one that will accomplish my overall objective, which is to keep the Buffalo Bills in Buffalo,” Hochul told reporters in New York City.

“There’ll be plenty of time to get the job done. The Buffalo Bills know there’s a commitment, a shared effort to finance this,” she added. “So it is very positive right now.”

Unresolved is how much public money the state and county will commit, with the Bills anticipating that taxpayers be requested to bear more than 50% of the cost.

Negotiations are on hold until the state completes its own stadium feasibility study, which Hochul said is expected to be released within days. The study will assess the costs of building a new stadium either at the Bills' proposed suburban location or downtown, versus renovating the existing facility.

The Bills did their own analysis in selecting the Orchard Park site because it was the most cost-effective, and built on a parking lot the team already controls. A downtown location is projected to cost nearly an extra $1 billion in part due to necessary infrastructure upgrades.

The Bills ruled out further renovations because they would prove too costly.

A state-funded study in 2014 estimated the next series of renovations would cost $540 million, with a majority of the work dedicated to essentially rebuilding the entire third deck. That cost is projected to be much higher in today’s dollars.

Raccuia was encouraged from the feedback the Bills received in presenting their stadium plans at the NFL owners meetings in New York City last week.

He described negotiations with public officials as being productive and collaborative.

“The parties are getting along well," Raccuia said. “We still have a long way to go.”