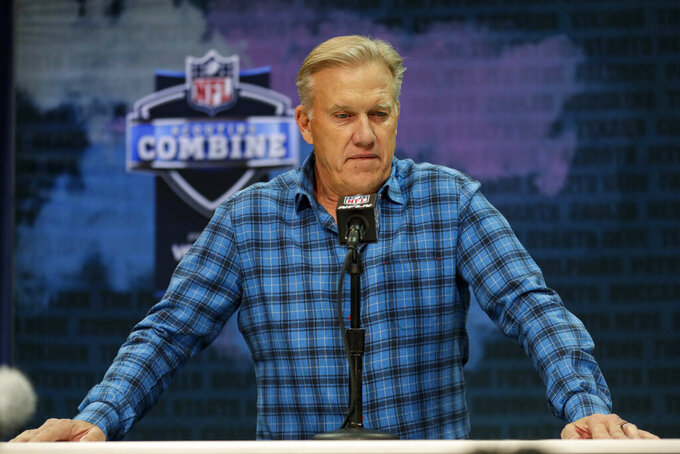 FILE - In this Feb. 25, 2020, file photo, Denver Broncos general manager John Elway speaks during a news conference at the NFL football scouting combine in Indianapolis. Elway announced a major change in the Broncos’ football operations Monday, Jan. 4, 2021, saying he will hire a general manager who will report to him but have final say on the draft, free agency and the roster. Elway, who has been GM since 2011, will remain as president of football operations in 2021, the final year of his contract. (AP Photo/Michael Conroy, File)

ENGLEWOOD, Colo. (AP) — The Broncos are focusing on five candidates to replace John Elway as general manager, including three with Denver roots and two who are Black: Terry Fontenot of the Saints and Champ Kelly of the Bears.

Team president and CEO Joe Ellis said last week it was “very important” for the Broncos to consider minority candidates in searching for John Elway’s replacement as GM.

“The Denver Broncos player roster is 75% black. We’re getting better at diversity as an organization, but we’re nowhere near where we need to be,” Ellis said. “This is a chance to interview and learn, and who knows, maybe arrive at a candidate with great diversity.”

The Broncos completed their first round of virtual interviews Sunday with in-house candidate Brian Stark, their college scouting director.

Fontenot interviewed Saturday, as did Patriots executive Dave Ziegler, who broke into the NFL with the Broncos in 2010. Kelly and Vikings executive George Paton interviewed for the job Friday.

Elway is moving into more of an overseer's role as vice president of football operations in 2021 and has pledged to remove himself from the day-to-day decisions on the draft, free agency and roster while maintaining a say on the bigger decisions facing the franchise.

In the short term, those could include: whether to exercise Von Miller’s 2021 option; re-signing or re-tagging safety Justin Simmons and Drew Lock’s status as starting QB after a so-so second season in which he led the league with 18 turnovers despite missing three games and most of a fourth.

Looming over the $3 billion franchise is a family feud that has simmered for years and has led to a court case next summer in which a judge will consider a lawsuit challenging the trust of late owner Pat Bowlen.

Ellis has said the franchise could be sold if Bowlen's children don't all agree on Brittany Bowlen becoming controlling owner.

Elway, 60, has been Broncos GM since 2011, leading Denver to a 96-74 record, five AFC West titles, two AFC championships and the franchise’s third Super Bowl title to go with the two he won at the end of a Hall of Fame playing career in the 1980s and ’90s.

The Broncos have failed to reach the playoffs in the five seasons since beating Carolina 24-10 in Super Bowl 50 and they’ve churned through 10 quarterbacks since Peyton Manning’s 2016 retirement.

That, of course, includes practice squad receiver Kendall Hinton, who was pressed into duty when the Broncos’ four QBs were disqualified for a game against the Saints in November over COVID-19 concerns.

In addition to Stark, Kelly and Ziegler both have Denver roots.

Paton is the Vikings’ vice president of player personnel and assistant general manager. He’s spent the past 14 seasons in Minneapolis, including the past six in his current position.

Stark has eight years of experience in Denver, where he’s been the director of college scouting since 2017.